I’m trying to piece together the route from Point State Park to the GAP trailhead in McKeesport, as in http://www.atatrail.org/tmi/map5.cfm. Google maps is some help of course. Some cautionary tales pop up concerning certain roads along the way. What would you recommend? I’m comfortable with city riding (NYC and DC) though scenery and less traffic would be better. Thanks!

It seems like I see a post like this every spring! I can’t wait for the trail to be finished. I was just thinking about this since I may have time for a quick trip on the GAP this weekend. In the past, I have avoided 837 by going through Braddock and then along E. Pittsburgh-McKeesport Blvd. But I believe the Duquesne-McKeesport section of the trail is complete now, so I was thinking of crossing the Rankin bridge from Braddock, negotiating my way along 837 for a relatively short stretch till I hit Duquesne. I’m interested to see if others have better ideas.

Duquesne-McKeesport has been open for a while.

Here’s how I would do it.

use nicks route 2 posts up… its the eventual official route of the trail and they are paving large parts of it all the time… last time i went on it it was paved almost all the way to kennywood.

Nick’s route goes via Sandcastle. This time of year, isn’t there a locked gate or two to contend with? Plus the weekday water plant closure on the Baldwin Boro trail?

If those are still issues at the time you’re riding, you could take Mick’s route into Homestead, then get on the unopened trail for the rest of the trip.

Or if “mostly paved and technically trespassing” doesn’t sound like what you’re looking for, Mick’s route on 837 to Duquesne should be OK. The bad part of 837 was the segment from Duquesne to McKeesport, but now there’s trail for that stretch. The section of 837 north of Duquesne is tamer, I think. Plus, it’s all paved and legal, and there are no gates or barriers to circumvent. Your choice.

you can get around the sandcastle gate by continuing alongside the railroad tracks on the access road.

same idea with the baldwin closure, there’s a gate that’s never locked you can get around the fence on.

Mick’s route along 2nd Ave in Hazelwood only works weekday working hours. The rest of the time the road is padlocked and you have to use Irvine.

The bit between the Glenwood Bridge and Homestead is pretty high-speed with no shoulders, so be careful. Also, bear right onto 8th street when it comes up. In any case, I prefer to do Glenwood Bridge on the walkway, scoot through the Wheeling Steel property then cross the tracks at the auto-parts store.

On a related matter, I’m really curious where the trail will go in the vicinity of the big gantry; there’s no space between the commercial properties and the river (like, it’s a drop). Will it use the street?

Once the waterfront to Duquesne officialy opens it will make things easier. That should be opened in April or May.

I can’t wait until giving directions is a non-issue and doesn’t involve stuff like “mostly paved and technically trespassing”.

*I would go with nick’s directions.

OOps! I didn’t notice that the route didn’t switch over to Irvine. That is how I would go.

East of the Grays bridge, but before the hill to Kennywood, 8th Avenue is actually pretty good.

If you can avoid the road up the hill to Kennywoood, that is a really good thing. Traffic is ugly up there.

I’m not sure how good the trail path through there is right now. I haven’t kept up with current progress. Actually, haven’t ridden the trail between K-wood and the river in 3 years. It was wretched, illegal, and scary back then. I imagine it’s changed.

I’m not sure about getting through Sandcastle in the the winter. If you can, then, yeah, the end of the Southside trail is pretty good.

It seems all my scary knowledge of that route is getting fast outdated. “Im not sure…” “I haven’t ridden…” “I don’t know if…”

Of course, if I was loaded for touring, I’d take the route I posted (on Irvine, though). At night, in the rain, or in snow, I’d stay on that route.

With no load? And plenty of day light? I’d give Nick’s route a shot.

Not sure which gantry you mean. The one by the movie theater?

As I understand it, the plan is to widen the sidewalk there (eventually) and declare it part of the trail.

That applies to all the sidewalk from Sandcastle to the existing waterfront trail, and perhaps some of the trail just east of the waterfront trail area around Marcegaglia.

On the other hand, Mary Shaw’s site says “Exact trail location will be determined when adjacent trail location is finalized.” But I don’t see how they could run it right along the river; seems they’d have to basically follow the sidewalk.

Gah, what a hassle.

I’ve ridden McKeesport (and later Duquesne) to the Point a few times, and (IMO, YMMV, IANAL) until the new sections are open, it may be that the OP asks the wrong question.

A better question might be, Where should I start/stop my ride from Pgh to DC? and right now the answer might be “in Boston”, especially if you’re bringing low-experience or young riders along.

But this is the perennial spring topic, just my $.02. best regards to all.

Thanks all! I’ll do the ride later this month and report back.

I’m sorry. I meant Boston, PA, just across the river from Versailles, not Boston Mass.

I meant Versailles PA, not the one outside Paris, France.

Seriously, you skip Route837, you skip a lot of risk, you skip the reverse lottery of riding through downtown McKeesport with your expensive kit, you park at the Boston PA trailhead, you get on the real / quality wooded trail where it’s pretty, and you ride to DC. I should also mention that the Versailles PA to Boston PA bridge is undergoing construction, I believe.

I hope you have a great adventure.

Just kiddin’ ya there, Vannevar! I appreciate your comments. What so amused me was Google Map’s bike speed estimate amounting to 255 miles a day. By that standard I’m a sightseer.

Also, thanks for clueing me in to potential safety / security issues along certain parts of the route.

Google thinks one day means 24 hours in the saddle. The hard part there would be the second day.

The South Side trail is closed weekdays, now.

I just ran into it on a lunch ride, the attached article says “March 21 to July 21”.

Out of curiosity I went up the Mon today to see how far I could get using bits of the GAP.

I got as far as the Whittaker Bridge: 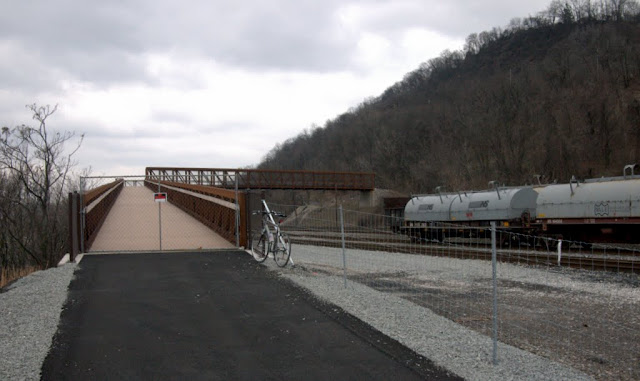 The fence is padlocked pretty securely. It looked like they were laying down fresh ballast further on, one of my least favorite biking surfaces; so I turned around.

Anyway, here are some observations.

1) Crossing the Glenwood Bridge, it was apparent that the most reasonable eastward path for the trail would be along the shore; there’s quite a bit of space that can be used, without affecting the junkyard’s operations area. To me the coolest solution would involve a cantilevered pathway, but I expect that we’ll end up with the cheapest solution. (Maybe getting some realistic royalties from those frackin’ companies could have paid for it, but I sense that our new governor would inform us that it would be unpatriotic to do so.)

2) The GAP picks up again at the fake town square that’s part of the shopping mall (and crosses over Waterfront Dr on a bridge). Of course once you cross, the first thing you encounter is a staircase, with a wheelchair- but not bike- friendly ramp to the side.

I imagine that the ultimate trail route will avoid the bogus square and follow the road to the Costco property (since there’s no waterfront to work with in between) then drop down to the Sandcastle property. As an aside, I realize that planning information might be sensitive and all (what if Osama found out?) but what harm could come from letting us commoners in on it?

3) From there,it’s a really nice crushed limestone path all the way out past the mall. You can then ride the street to just before the ramp up to 8th Ave. The trail resumes on your left (at an amazingly crappy curb cut). You can take the trail all the way to where I took the photo. On from there, look at Nick’s route referenced above (where he scoot over the tracks is about where the bridge crosses).

That fence your bike is leaning against is new. Well, it wasn’t there a month ago when I checked out the the homestead / duquesne section of the trail.

thanks for the picture! this is exciting!

I am looking to bike the trail beginning the second Saturday of June. Can someone please reply with the best route now (given gates locked, trails completed, etc)

I really appreciate any feedback you can provide.

Check out the Tag-o-rama thread and it’s latest tag. I believe if you are willing to hop two gates you can get to mkeesport.

you don’t have to hop the gates. i heard a rumor you can lift them up and slide your bike underneath it.

Thanks for everyone’s info. Sunday, August 21, I rode a circuit from Homestead to the West End then back as far as Kennywood. Nick’s route was spot on. Sandcastle back gate wasn’t open yet, but a couple of other riders clued me in to the 8th street detour. It was open on the return. How do I post pictures here? The Whittaker Bridge is open (Ahlir’s post). The hike along the railroad tracks from Sandcastle will sometime soon be replaced by an actual path. Thanks to whoever scribbled the “McKeesport 2 PGH 2007” arrow on the railroad crossing gate — I knew I was on the right path.

This was more bridges than I can ever remember crossing in one day. So many people out biking. What a great ride. Thanks Bike Pittsburgh!

Many pictures to post… will take a while to organize.