So about that Snow…

I bussed it to work the past 2 days. Gonna hop on the bike tomorrow. Has anyone been doing the bike lanes or sidewalks on Forbes from Frick Park to Sq Hill?

I had a nice quiet ride to work through the Allegheny cemetery today. The snow wasn’t so much plowed as it was packed down on the main road, making it pretty slippery. I was also pulling my BOB trailer so I took it pretty slow. Most of the secondary roads where untouched though. There had to be about 4 inches of nice fresh powdery snow to fly into.Some of the steep hills where untouched. Lots of fun to slide down. I hope there is a few more inches of fresh snow on the ground before I leave for work tomorrow.

You got your wish. 2″ extra since 11 PM, at least in Brighton Heights.

I’ve been enjoying the bus this week.

@pseudacris Bike lanes on Forbes from Frick to Squirrel Hill are mostly snow as of this morning, but there’s enough room just riding the white line. Just stay to the left. The sidewalks looked worse.

Ride to greentree was pleasant with a few detours. I took the pavement up Poplar to Mansfield because the sidewalk looked hideous. Shockingly wide passes from motorists.

i seem to be the only one using the rack today outside newell simon hall, but i’ve seen a few folks on bikes the last few days, and the bike room at my gf’s place had another bike covered in salt with puddles underneath it (and some sweet gloves i wanted to ask about, but alas!).

i wish i had little stickers or sticky notes that say “badass!” to put on people’s saddles when i see their bikes parked after obvious snow use.

Thanks, miasme for the report on Forbes. I took it in after rush hour late this morning. The only place I could ride in the bike lane was the curve near the community garden in the cemetery. I skipped the trails and took Forbes & Fifth all the way into downtown from the Regent Sq area.

That PG photo is great!

Maybe I don’t ride too fast, but I only use my balaclava when temperature drops down to the 10’s.

I wish I could find my balaclava (not to be confused with the tasty layered greek pastry). The scarf falls down and kind of restricts my breathing.

The studded tires are working very well! Yesterday I biked from Garfield to work in the South Side, to Penn Brewery, then back home again. No problems. 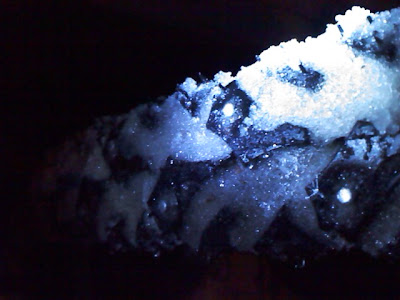 The only thing I wish I could figure out for cold weather gear are the gloves. My fingers can never stay warm. I’m wondering if I should invest in some smart wool liners to go underneath my snow gloves?

For when the snow gets deeper:

I picked up a cheap set of glove liners and they definitely help.

I’ve also found that curling my fingertips back under the bars (as opposed to keeping them on the brake levers pointing straight into the wind) helps a lot. Of course, there are a lot of times where I still want my hands on the brakes, but a fair amount of the time I feel ok keeping at least one hand just on the bars.

The best gloves in my arsenal are the cheap fleece/Thinsulate models that some older relative got me for Christmas many years ago. They are comfy down to about 10-15 degrees.

Cold fingers have been an issue for me, too. However, glove liners under lobster claw novarras have been great *****especially when coupled with Mick’s advice to keep the core temperature up***. (thanks, Mick)

I have a pair of what were once killer warm goretex ski gloves with a fleece liner, but over the last few years they just don’t keep my digits warm anymore. I have been wearing a newspaper plastic bag with the thumb sticking out lately, which does the trick. Looks funky, but my fingers can’t see. Eventually they tear, but I get a new one delivered to my driveway every day!

The only thing I wish I could figure out for cold weather gear are the gloves. My fingers can never stay warm. I’m wondering if I should invest in some smart wool liners to go underneath my snow gloves?

I got some glove liners a few weeks back and I guess they make a difference, but I have the strange experience of alternating just fine/warm hands to terrible/cold hands on the same ride. Maybe core temperature is it.

A girl at school asked if it was me she saw riding on Fifth Avenue yesterday morning. I said yeah, it could have been me in a bright orange jacket. She said she figured it was me, since “who else would be riding a bike in 20 degree weather?”

“Another awesome person,” I replied.

Nope, I don’t have an orange jacket.

I was thinking recently of taping my metal brake levers with some electrical tape or something to insulate my fingers against the bare metal, which obviously saps a lot of heat from my gloves. Seems to make sense… imagine riding in the winter on unwrapped bars. Anyone ever do this?

Hmm, seems like rechargeable electrically heated handlebars would be something someone clever could come up with.

Electric tape isn’t much of a thermal insulator. Bar tape ought to do nicely, however.

Hmmm…what about something like PlastiDip for the levers? Once it dries, it should be pretty darn secure, but you could theoretically cut/peel it off later if you really wanted to.

OMG. I can’t believe I forgot about Sugru.

Someone, maybe it was one of you, was telling me about Sugru at the last BikePGH volunteer night. Cool stuff.

Also Pseudacris, I used to have Lobster Claw gloves (I called them Ninja Turtle gloves, for obvious reasons), but I lost one of them.

“this is why we can never have nice things!”

Has the jail trail been attended to? I won’t ride it until Sunday, so I have my fingers crossed.

on the (untouched) trail past the high school, i almost had my first ever experience of getting stuck on my bike.

the only part of that that got any plowing was the initial “ramp” going up the hill (towards the parking lot adjacent from beechwood). so, of course someone parked their car there (to go along with the car someone parked ON the bike lane along penn). i had to straddle-walk my bike past the car, and i forgot to downshift, so when i got back on the bike (still going uphill, in 5-6″ of snow) i could not really make it go no matter how hard i pushed on the pedals. i eventually got going and managed to downshift to a useable gear, but not after almost falling over several times… i’m sure it was pretty comical.

otherwise, that little section has been a lot of fun all week, it’s very challenging to ride in that much snow. i’ve managed not to wipe out but have been very close. the number of tire tracks i see going through there keeps diminishing, by the end of the week i think it was just me and maybe one other person, unless people are riding over the shoe tracks (which seems even more difficult than just riding through the snow).

@ helen You’re good on the Jail Trail as of noon Saturday.

Both Jail Trail & Panther Hollow have been plowed as far as the plow could go (sort of).

On the downtown end of the Jail trail, the plowing stops as soon as the jail parking lot starts, so cut through it to 2nd Avenue.

On the south end of Panther Hollow, the plowing doesn’t start til the top of the parking lot. The Path under the bridge leading up the the trail is a mess.

Careful out there, everything that isn’t freshly salted is coated in a nice thick layer of glare ice. Greenfield hills are impassable by car, bike, and foot. I had to walk in people’s yards through the snow.

The Eliza Furnace Trail was too icy for me so I ended up on Second Ave. With the sun up now the icy glaze should clear up swiftly.

I took rack n roll in. Hoping for a good ride home. E End and Peebles were rather like untouched creme brulee this morning.

The roads are just fine as long as you don’t have to slow down or change direction.

Saw some guy riding downtown this morning on a dark Trek. I was impressed, until I realized that he was not wearing a helmet. While I can understand that some people may choose to ride without a helmet as a general practice, on a day like today it just seems foolish. be careful out there!

geez, when i left my house fair oaks was basically completely ice. i started walking my bike, but both sidewalks were ice too. i had turned around to go home, but i took one last look over my shoulder and saw another cyclist on Negley, headed for the hill.

so, then the dumb part of my brain kicked in and thought “well, if that guy thinks it’s ok…” well, it was ok, but i still feel really dumb for doing it. i was riding both brakes and had my left foot down too, hoping for no ice… add in all the cars (some of which just *had* to pass me to get up to that slow moving line of cars ahead of me, of course), and it was pretty damn unsettling.

the streets in shadyside seemed much better than fair oaks… and it is above freezing so hopefully the ice won’t last.

Reynold’s St. was basically a skating rink this morning when I was on it. Someone had put chairs up to block the steep hill near Point Breeze where I had to walk in the snow between the street and sidewalk. Otherwise I would have been commuting on my ass-cheeks. The only place I saw evidence of road salt was the parking lot in Mellon Park.

Any time I applied the brakes my wheels grew minds of their own and wanted to go in every direction except straight ahead.

At one intersection I slid out, put my foot down and continued sliding on my foot + 2 wheels.

It was a pain in the arse (literally) to get to work today, but I’m still glad I didn’t take the car.

The worst part of my commute this morning was taking my bike down the stairs and across the sidewalk. Both were sheets of ice, but the streets (Fairmount – Negley – Ellsworth – Fifth) were pretty well-salted and clear. The small sections where I encountered ice were handled fairly well by my studded tires.