I dislike both ads. They’re really both pretty obnoxious.

I dislike both ads. They’re really both pretty obnoxious.

true, but one is about bicycles. and it’s responding obnoxiously to an obnoxious ad. i approve.

The more obnoxious an ad is, the more effective it is, a sad but true media basic.

Of COURSE they were.

You wouldn’t want to spend a few hundred million corrupting elected officials to gut public transportation unless that would put you right on top, would you?

I’m making the assumption that the thieving attempts of GM to rob the US of rational transportation alternatives that have been documented and proved in court are but a small minority of those thieving attempts.

that is quite an assumption. one that doesn’t appear to have any evidence in favor of it.

indeed, “most authorities agree that trolleys bit the dust in LA and elsewhere not because of a conspiracy but because they were slow and inconvenient compared to autos, and in the long run just couldn’t compete.”

I will avoid Giant for a while now, not that my missed sale matters. While attacking ads work, why can’t people sell products on their own merit/

…because that’s just not the Amuurican way.

re: “…why can’t people sell products on their own merit?”

Because people don’t make purchases based on need or rational decisions, haven’t for a hundred years (See “Walter Dill Scott”).

@ hiddenvariable doesn’t appear to have any evidence in favor of it.

The trolleys did not die solely because of some GM conspiracy, for sure. BUT there is plenty of evidence of many GM conspiracies.

Saying there isn’t any evidence of that?

Are you sure you know what the word “any” means?

oh, i forgot about this ad until I was looking for a bigger picture of the giant ad and it came up… according to GM the buses are full of “Creeps & Weirdos” 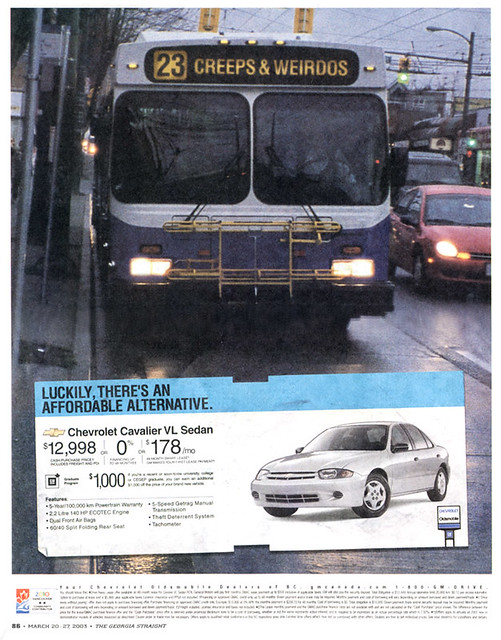 The Giant ad, if they’d come up with that in a vacuum it would be pretty dumb but given the circumstances I’d say it’s pretty appropriate. It’s also nowhere near as obnoxious as the GM ad considering it’s not portraying a driver as some kind of loser who has to hide their face in shame.

Got to agree. It’s short on thinking, but given the landscape they were in, the Giant ad wasn’t super out of line. And I wouldn’t be surprised if they ran this because they (or their agency partners) were ticked off, not because they thought it was strategically smart.

Somehow I don’t think a picture of people stuck in 10 lane traffic is going to resonate with the mid-western college student whom is in the market for a truck.

@ salty …it’s not portraying a driver as some kind of loser who has to hide their face in shame.