I have no idea but I bet this is Lincoln lemmington or Homewood.

I’m thinking Morningside, working from the cowboy and bourbon clues. My chances of getting over there soon are near zero, though I went past what I think is the spot the day before this was posted.

Another geo clue: it’s beyond Penn Ave, but within city limits.
And nte that it’s not merely a splash of bourbon it’s a whole bottle of bourbon. 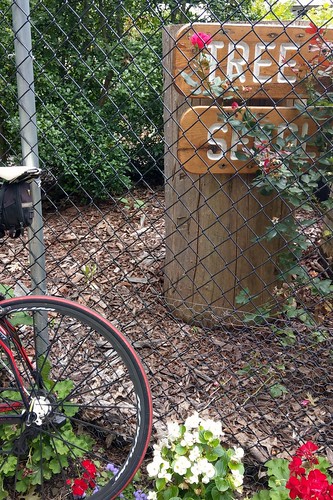 N Point Breeze!   How do the clues fit in, especially the alcohol related ones?

I started with the eastern part of town, near where Penn becomes 8 / Lincoln Highway / Ardmore. The cowboy could be from Dallas, and a whole bottle of bourbon is a Fifth. That got me searching.

There are only a couple streets running between Fifth & Dallas (SIDE NOTE: Thomas & McPherson are milled and probably to be resurfaced soon!). You’d only roll this street once because the “bottle end” (Fifth) is trafficky.

The “BikeFest” clue should have said BikePGH, I think, since BikePGH hits Homewood / Hamilton / Dallas. I’m not sure about “pre-season”, maybe trees are bedded in the winter?

Dammit, even I messed it up. I shoulda typed “BikeFest should have said PedalPGH”.

PS: The restrictions (both ours and the landowners’) around private property have killed two tags I’d really love to set. And damm it’s frustrating finding a monstrously primo location, only to discover it was already used recently. Foo!

Well, you did figure out clues that the other Tag-o-Rama ‘pros’ didn’t, or didn’t get around to acting on…

The only real rule (at least in my mind) is that all tags should be visible from a public street or path.

The private-property thing obviously bends when you lean your bike against a building, but that’s ok. It also would be ok to get close to a public display (like a statue) even if it’s on nominally private property. It’s a public display.
For example, we’ve had several tags on university properties. And all of them have signs to the effect of “this is private property and if you don’t belong here you’re trespassing”. But of course you’re allowed (and even encouraged) to go there. The injunction is just there to assert the owner’s right to have you prosecuted if you do something bad. (But if there’s a big No Trespassing sign, I would probably not tag there.)
My own definition is “would some other cyclist (or pedestrian*) have otherwise come this way?”.

(*) For example, setting a tag on the Parkway is not right. You shouldn’t make people do potentially dangerous things.

But in the end it’s one of those Judge Porter things. So far we’ve made it work.

I’ve only taken serious guff on a tag once, when I picked up the Frank Fuhrer tag very early in the game. The tag was a sign right next to the guard’s shack. The tag setter apparently irritated the guard some, and me showing up with a camera to take a picture of the sign sent him over the edge. I just ignored his yelling and pedaled away real fast.

I just ignored his yelling and pedaled away real fast.

Well, I would almost consider that an incentive to go get that tag. The guard can do whatever, but if you can get a snap from a spot that’s on public ground, you’re ok. It’s not like it’s a secured government location.

Here’s one for you skyline triangulators. Click through to the full-size photo, and maybe it’ll be clear enough to guess the landmarks. Even so, I’ll give you this hint: the big, familiar features at left-center and right-center are at opposite ends of Penn Ave. And the monument in the center? That’s a plaque commemorating the USS Maine. 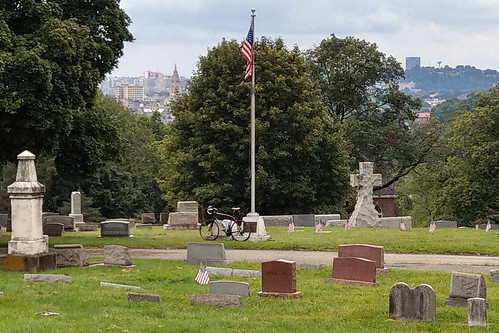 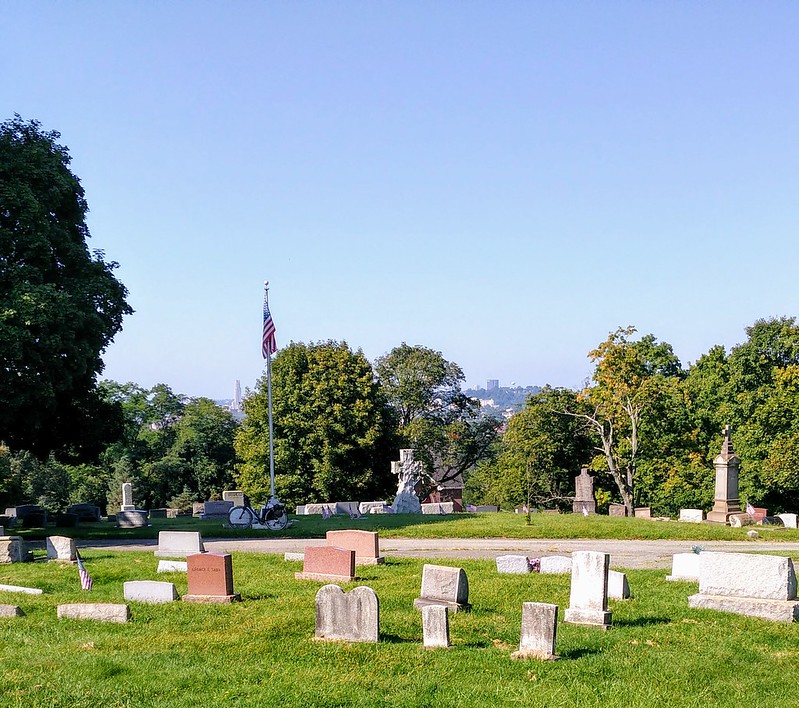 There’s really only two cemeteries at the right elevation and bearing; the proximity between the Steel Tower and the Garfield water tower makes it the St. Peters Lutheran Cemetery. 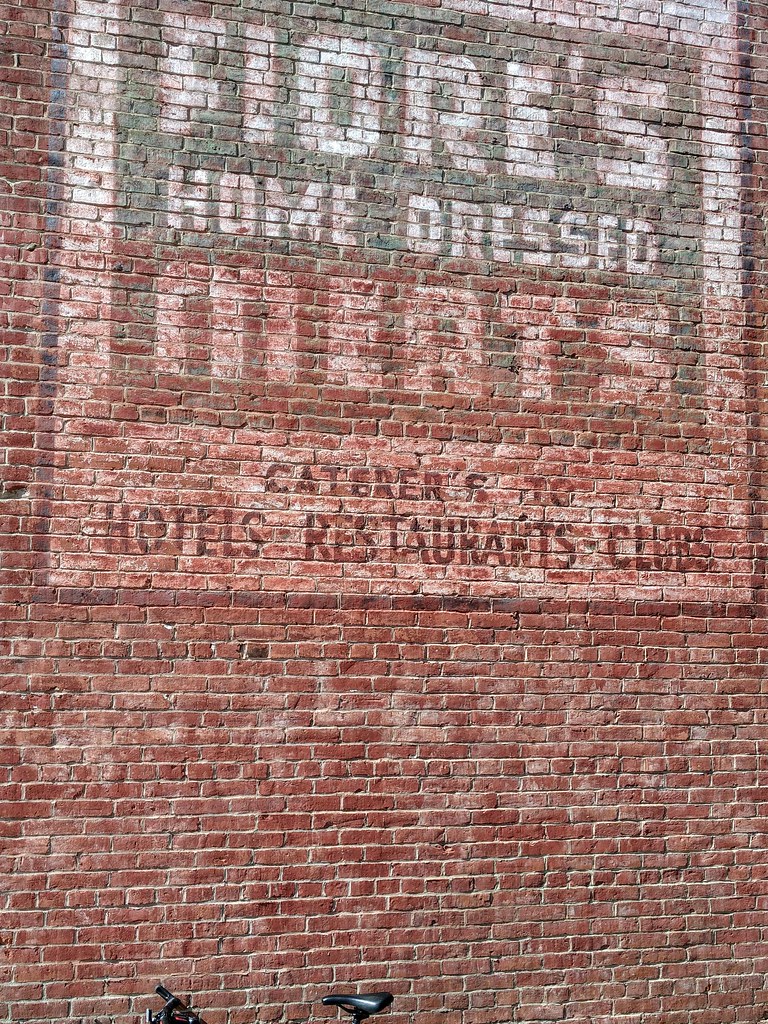 Back in the old neighborhood… eclipsed by the new.

So one of the things I like about this sign is how the lettering is scaled to the brick spacing. You don’t really notice it at first, but it makes complete sense. On the other hand, there’s the “caterer’s”, as opposed to a more grammatical “caterers”. You sort of wonder who decided on that; the client or the letterer. I’m inclined to think that it’s the letterer; it’s a common feature of commercial signage in Pittsburgh. The client went along.

Anyway, this ought to be a easy tag.
Especially if you’ve been cruising around town for the last few years… 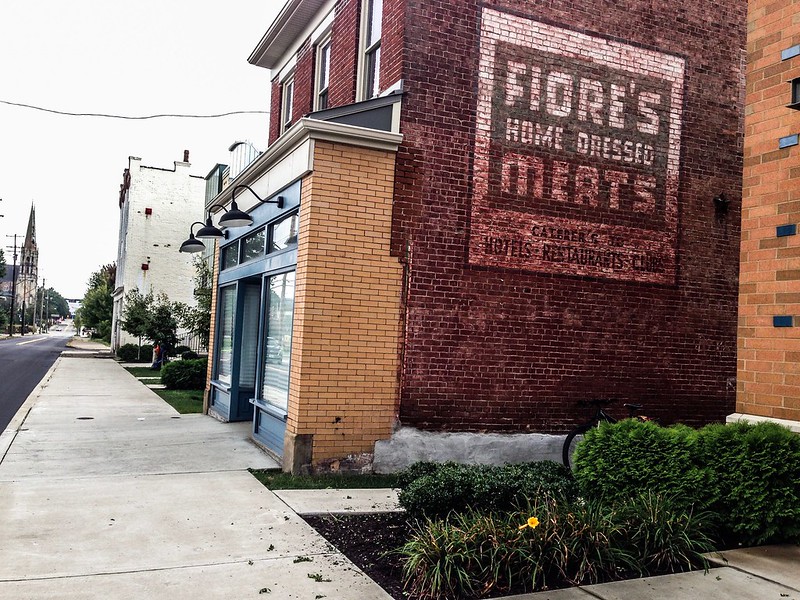 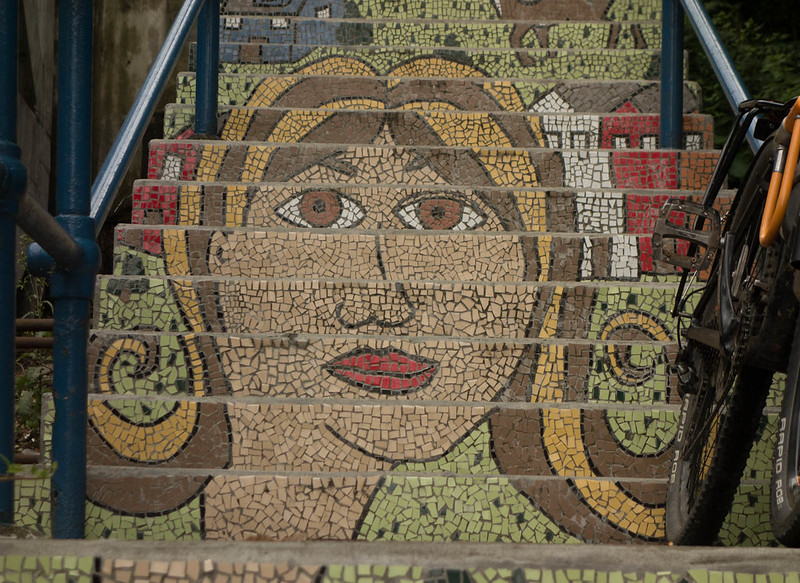 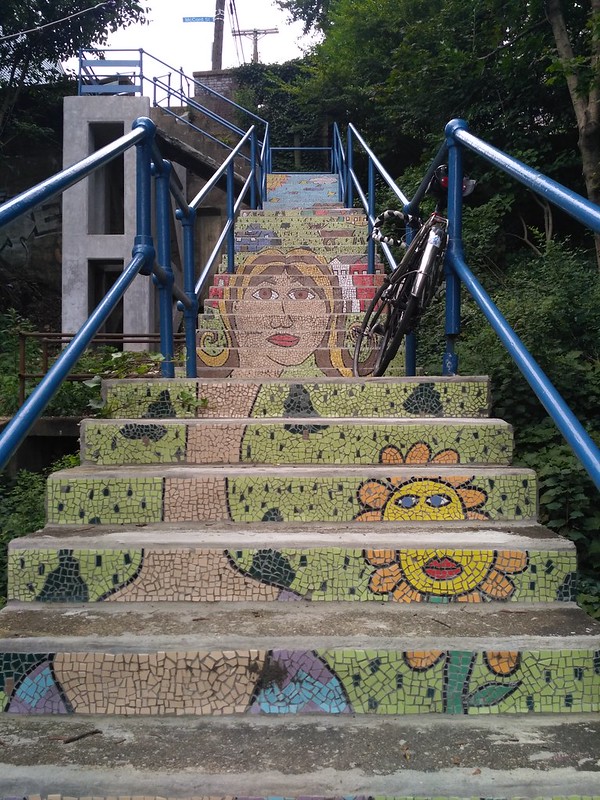 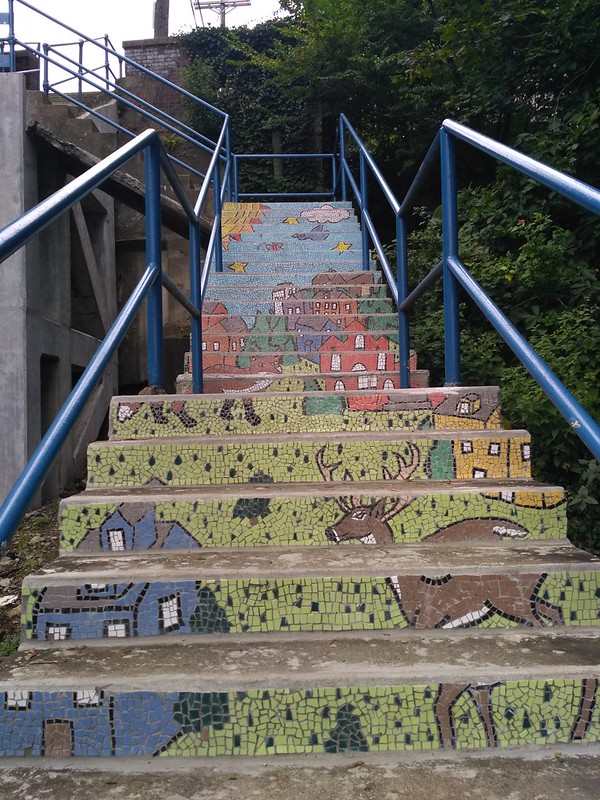 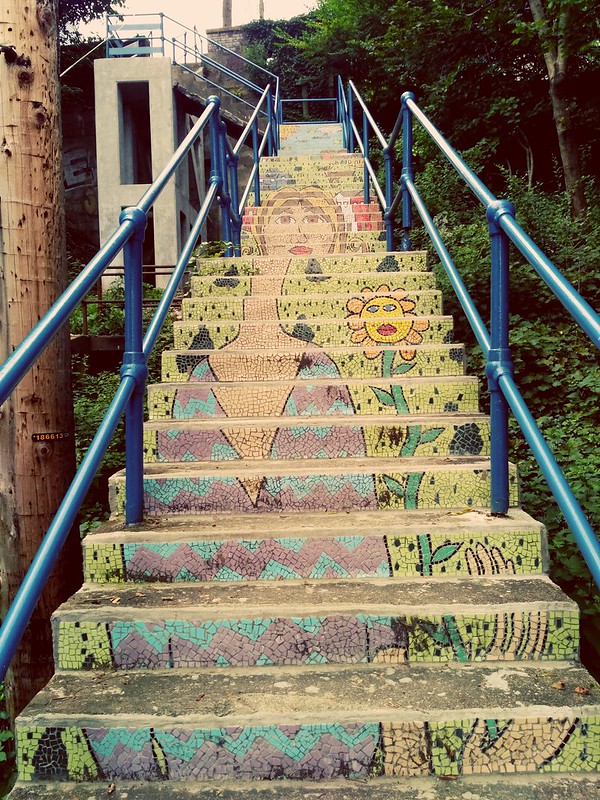 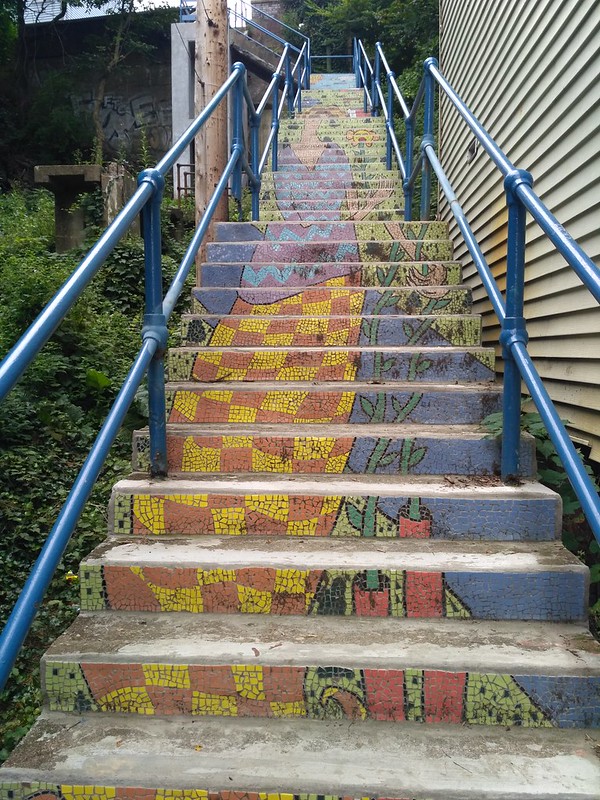 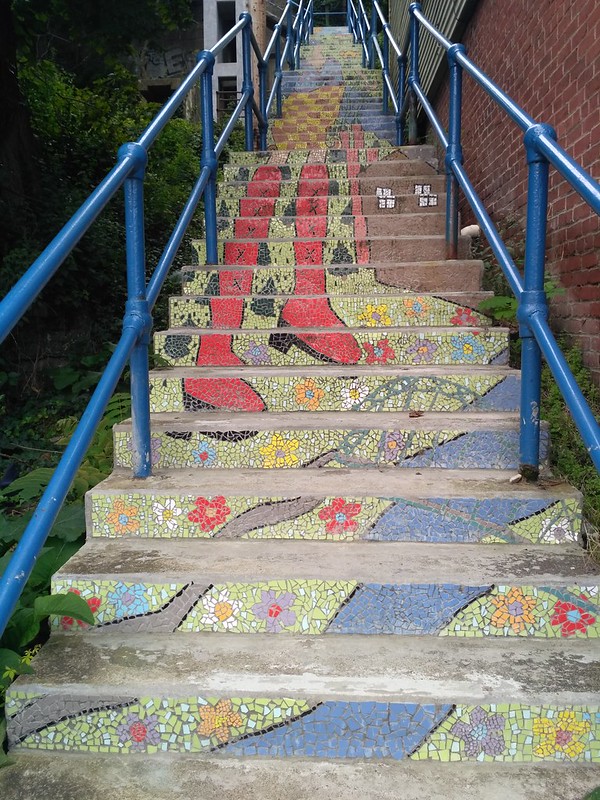 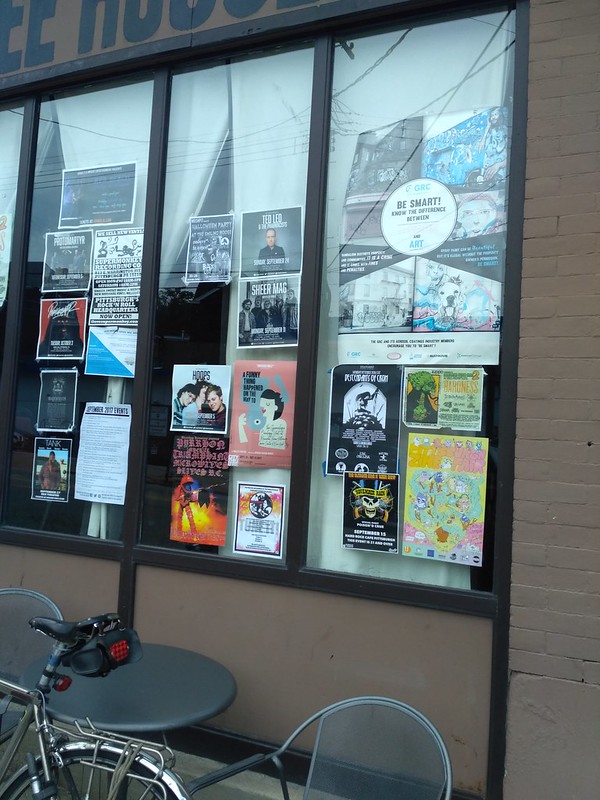 According to Google maps, those stairs-with-mosaic are Oakley St (at Josephine).

Dammit, I was looking in the right place and rode right past it (three times)! I guess we try again tomorrow afternoon. 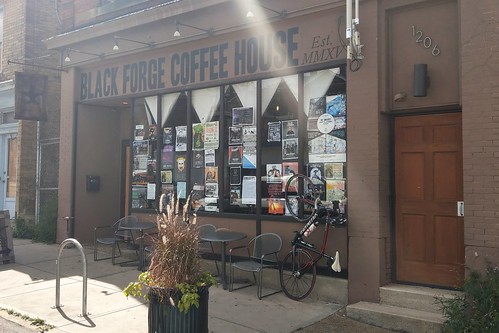 Hello and good afternoon, those of you watching at home and members of our studio audience… Welcome to “Our New Tag”!

Here’s the image our contestants must work from: 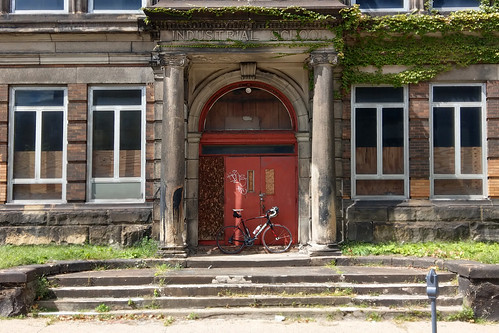 Today’s bonus clue is: STEEL TRUST’S PRESIDENT. WHO IS SOMETHING OF A PI H LANTH ROPIST. 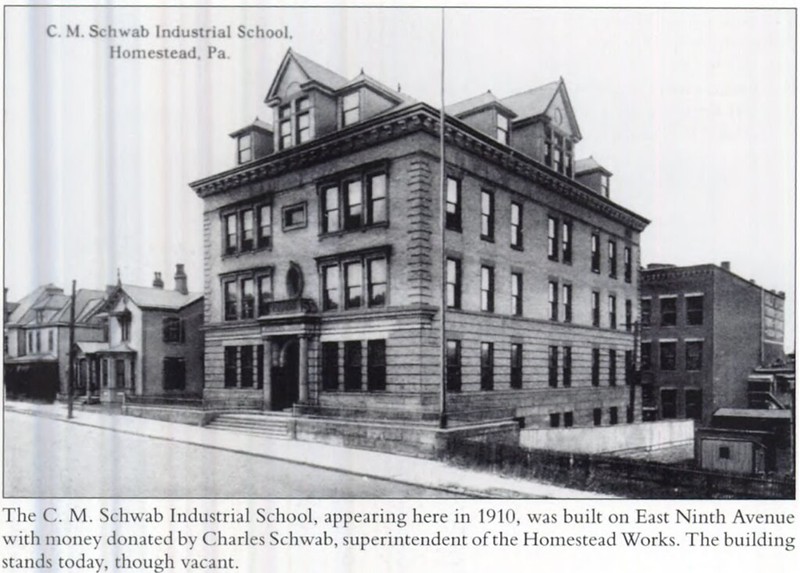 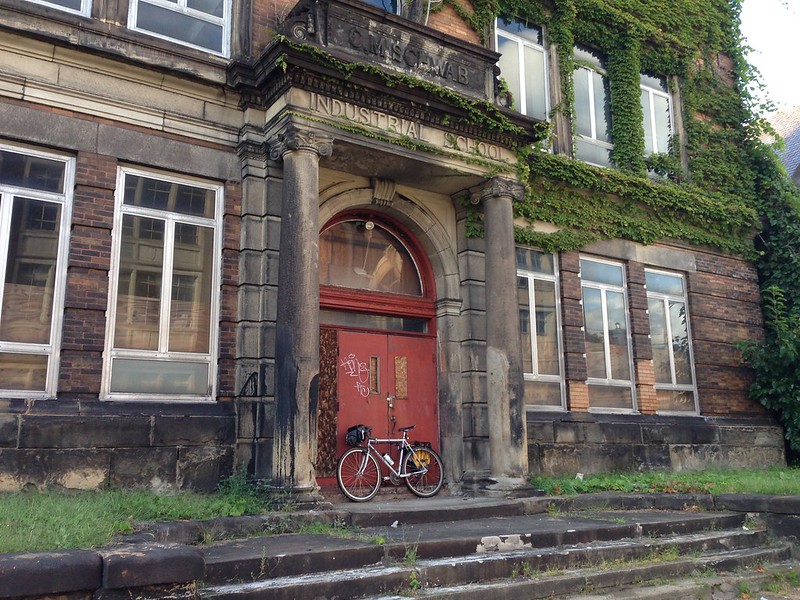 W. Mifflin was known as Mifflin until 1930s ish.  When Incorporated as a borough added the west probably because Mifflin pa was also out in Juniata county.

The Schwab Industrial School (such a great name) is an old tag… Though the ivy looks like a new feature.

As a rule, you might want to check the tag map to see if your prospective tag was done before. Not so much because it’s a repeat, but because long-time players already know where it is. It’s ok if you repeat but a novel angle makes it more fun. For example, a reflection in a window of the Propel “school” across the street.

The Oakley Street steps were tagged just last year too, but they had no mosaics then. Excellent choice to retag them now!

Tag-O-Rama turns 7 years old this month. It’s interesting to see how some of these repeated tags have changed over time.

hint: the center of the field (see pic) is inside the rectangle.

The aspect ratio of the pic is weird, at least on my phone.  It is squished horizontally so the people on the field look like toothpicks.  Is it possible to repost the picture with a normal aspect ratio?  When I first saw it I thought it was a toy field or something but couldn’t figure out how a normal fence surrounded it.

I see the “squish” effect on an iPad, too, even when holding it landscape.

The squish helps reveal the hint. 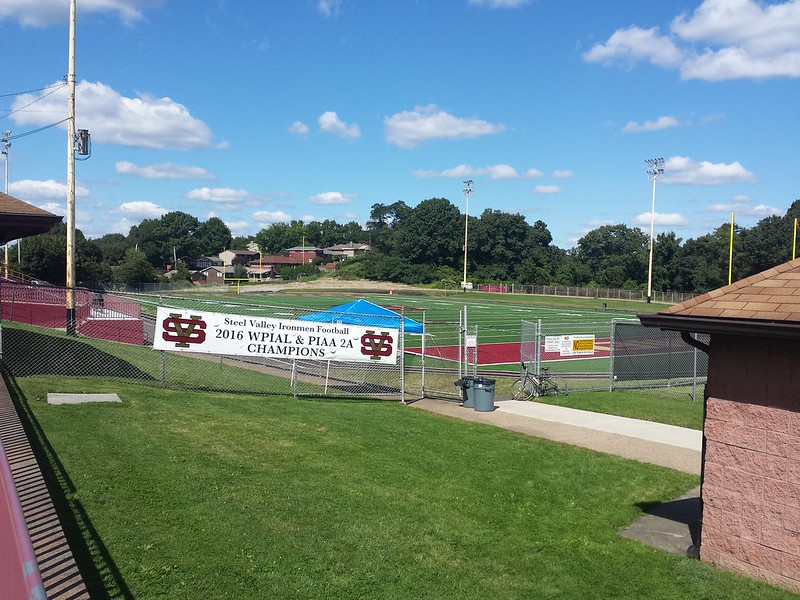 The box goes right through the 10 yard line

Yeah, I take it baaaaaack. My route took me way out of the square. Poorly planned, but got there.

Just one of your garden-variety tags with some awesome ironwork. Set with first-time tag-mate, SoulSista.