The Tag-O-Rama game started in September 2010, and periodically needs a new thread, due to message board issues. This is thread 7, but with thread 6 we decided to switch to a yearly naming convention consistent with other long-lasting threads. Here are threads one, two, three, four, five and 2017 (aka six).
The rules are easy (although wordy, it is not hard to play)
#1 – Find the tag and get a picture of your bike in the same location (as best as possible). The first person to post a found tag gets to place the next tag. If you get a tag, but somebody else posts their picture first, you lose – you’ve been Bruced.
#2 – Take the tag to a new location, shoot a photo with your bike in the picture, and post it here. Keep the tag within Pittsburgh city limits and the surrounding neighborhoods. Give a few hints (or a short poem if you’re so inclined) so the next person can figure out where the tag is located. Try to place the tags in interesting locations, somewhere historic, etc. Remember, the point of the game is not to make the clues difficult to figure out. It is about riding, not Googling.
#2a – After you pick up a Tag, a new tag must be placed within 36 hours. If the new tag is not set within the time limit, the first Bruced posted gets the tag. If no Bruce was claimed, tag will revert to the previous tag, and somebody else will get their chance. If you won’t have the time to drop off a new tag, don’t pick it up to begin with.
#2b – This rule is intended to keep the game moving. If the overdue tag is posted before somebody grabs the reverted tag, then the new tag will stand. However, giving the overdue tag-holder a load of crap is highly encouraged.
#3 – Tag must be findable – don’t make your tag so obscure that no one will find it. Make sure to let folks know what riding conditions are involved to get to your tag.
#4 – File photos are NOT permitted. You may not use a photo taken before the current tag was set to prove you found that tag, nor use a photo taken before you photographed the current tag to set a new tag.
#5 – All images of tags that are posted, whether picking up or setting a new tag, MUST include the bike you rode to the tag. If your bike isn’t in the posted image, you don’t have a tag.
#6 – The bicycle in the picture must get to the tag location under the player’s own pedal-power.
#7 – No whining.
. . . . . . . . . . . . . . . . . . . . . . . . . . . . . . . . . . . . . . . . . . .
UPLOADING IMAGES
How to Post Photos
In case you’re looking for the photo upload button that was once on this site, sorry it has disappeared. (edit for 2017: although you can find the “add media” button, it doesn’t seem to work correctly vis-a-vis uploading pictures to the message board.) We hope it comes back, but for now, you have to use the instructions in the link above.
. . . . . . . . . . . . . . . . . . . . . . . . . . . . . . . . . . . . . . . . . . .
Some helpful links for the convenience of new players:
1. View the Tag Map to see all the tags.
2. The Tag-O-Rama spreadsheet, showing who got which tag
. . . . . . . . . . . . . . . . . . . . . . . . . . . . . . . . . . . . . . . . . . .
For those of us who want to know more about the record keeping functions of Tag-o-Rama …
To add a marker to the Google Tag Map, sign in to Google, go to the map, and click the Edit link on the left. Then click the marker icon in the upper middle. Then click where the marker should go.
See one of the previous threads for examples of game play. 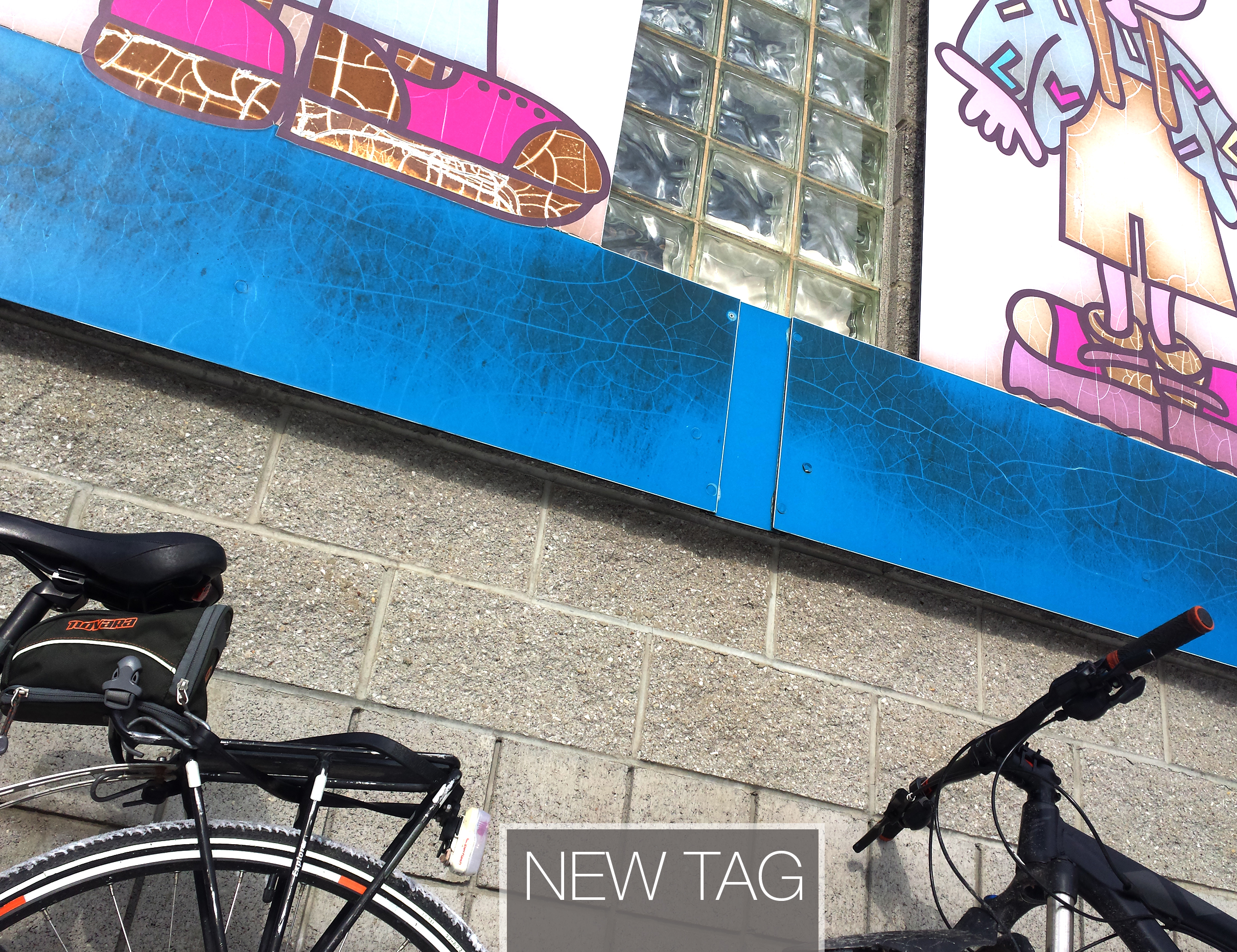 Probably several of us know where this is.
But at least for me the day was busy, in that post-holiday sort of way. 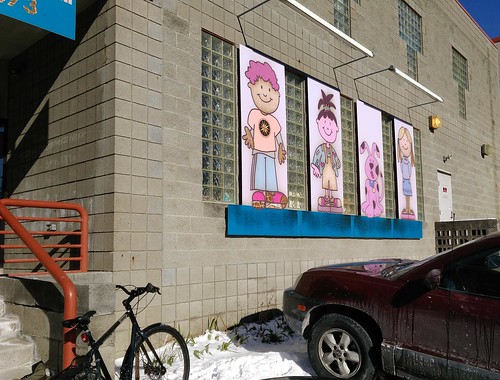 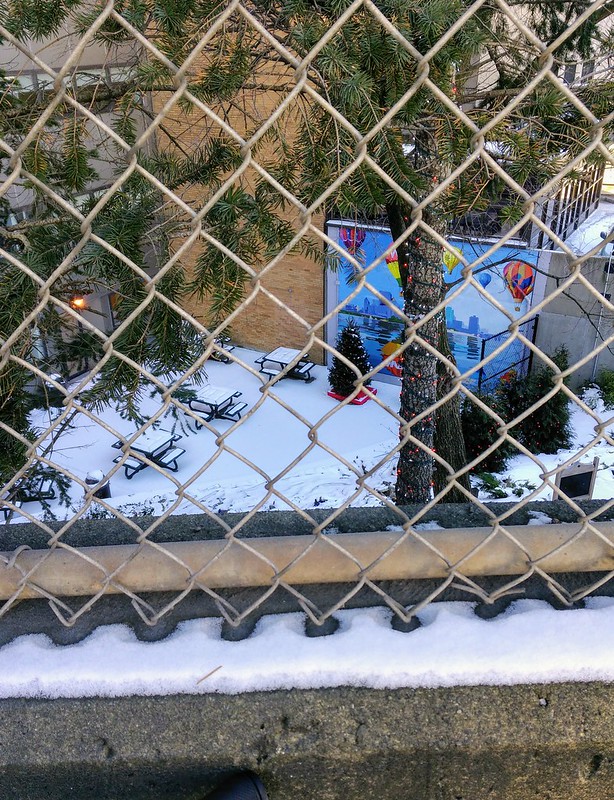 Is there an uncropped version that was supposed to be posted of the photo?   There is no bike in it when I view it on the website and when I click on it I can’t pull up a bigger version. Sometimes the website accidentally crops them in a strange fashion

Sorry about that. I guess I was too focused on composition & stuff… 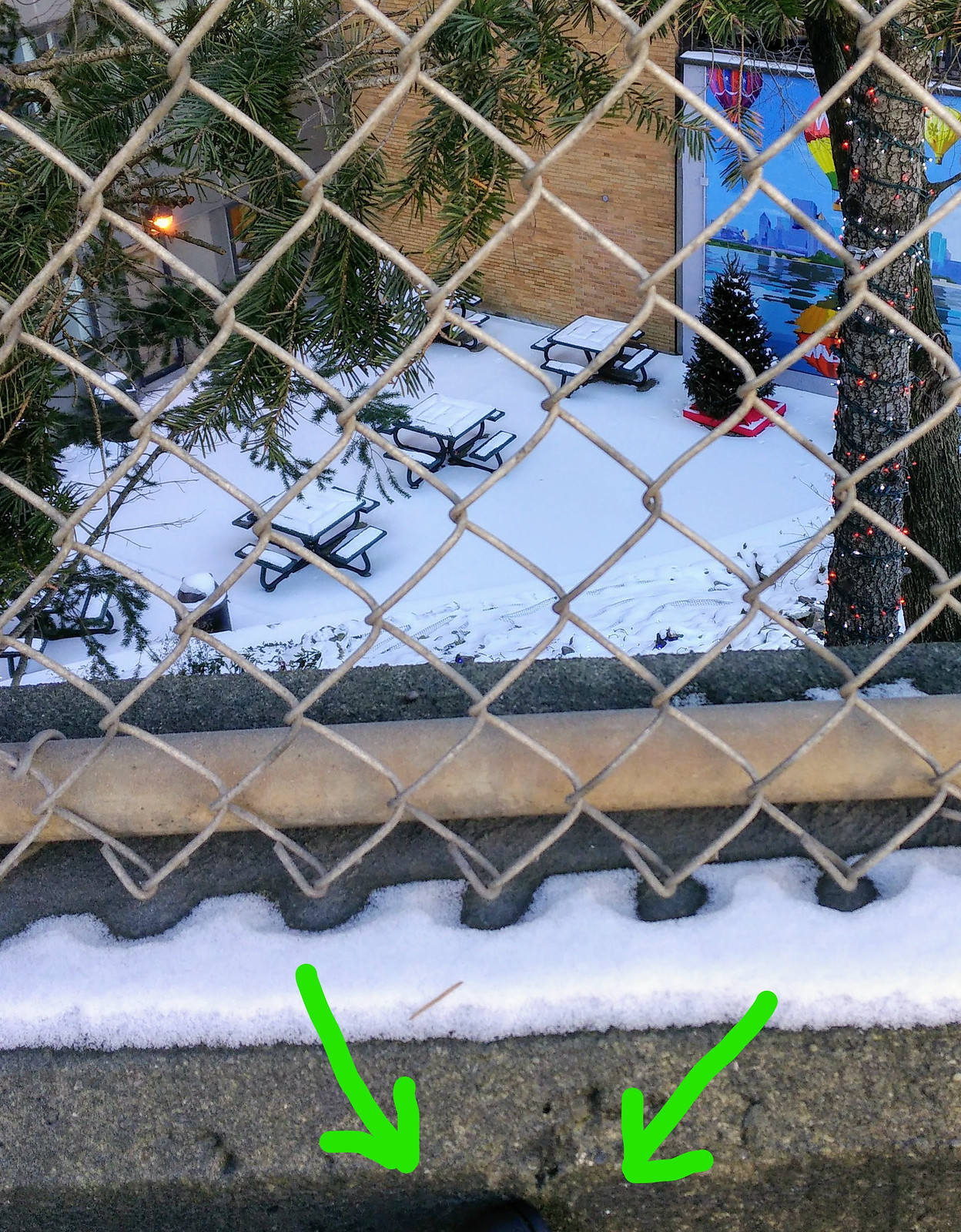 The (right) tip of my handlebar.

And, detail from a reject: 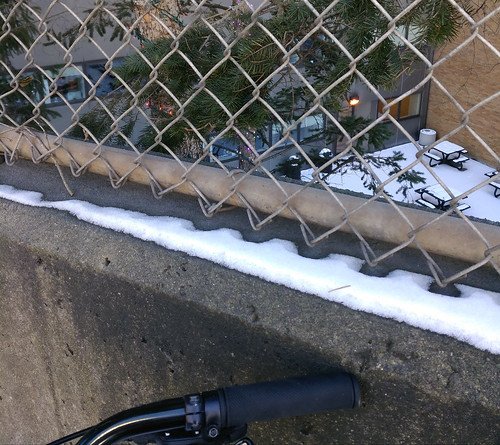 In Chrome, I right-click on the pic and do “Show image in new tab”; it will give me a full-resolution image. In this case I posted at a higher resolution that normal, on the off chance people want to study detail for clues. Or maybe you know this place already, in which case nevermind…

That’s good. I thought that the bike was in there but the message board cropped the pic strangely, as it does sometimes. Turns out all was well.

Next time, Paul, keep gloves on while shooting photos when it’s this cold! 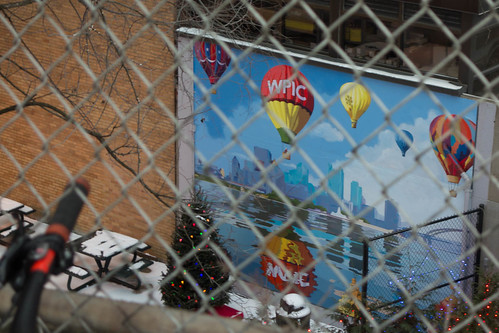 hint: it was too cold to travel far. 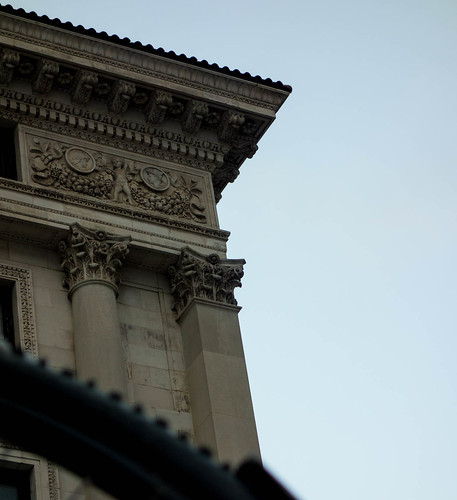 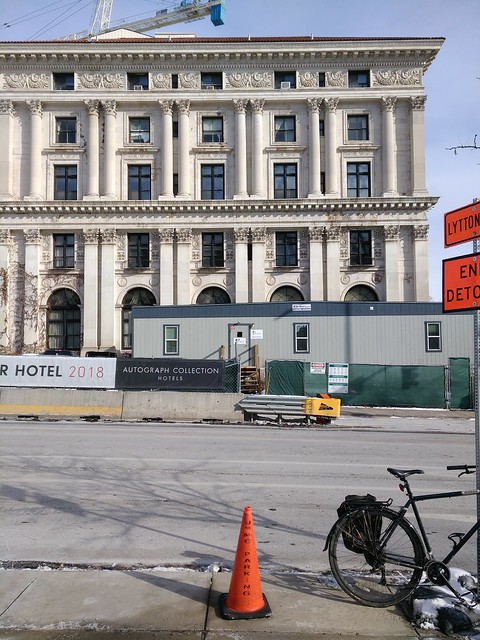 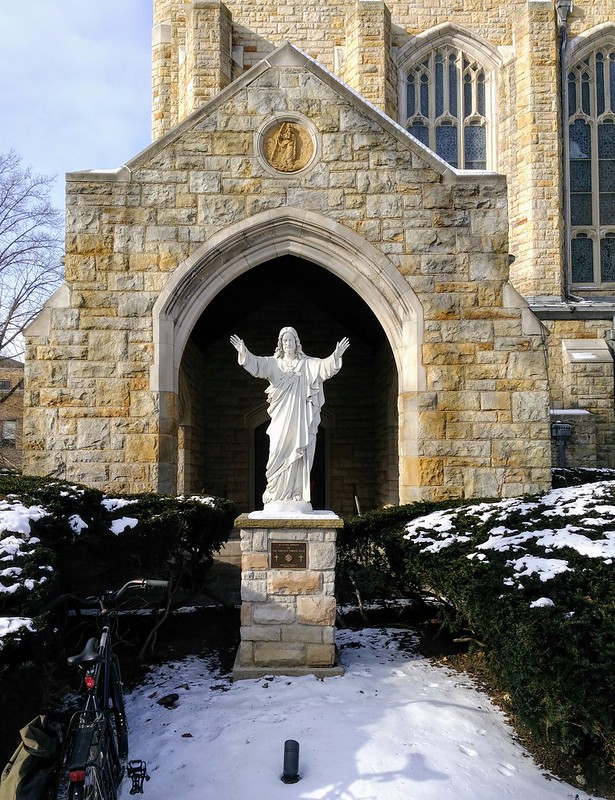 The old oak tree our shade shall be,
And there you shall sing gay songs to me ;
Each sparkling glass that we fill to-night,
Reflecting a smile, shall beam more bright;
And we’ll drink to those that we fain would see
Under the shade of the old oak tree.

It took a while to find a decent poem on this theme. Not because there weren’t any (there’s many more than you’d imagine) but because they were all so uniformly bad. “Not everyone is a poet, yet does not know it.”

Anyway, there is a tree off to the right. By the bark it looks like it might be an oak, but maybe not. And of course there is no shade. But this is the clue that I made for you.

A little beyond the box is tolerated. A lot is not. I set one in West View one time and got snarled at for it. You would have caught a lot more grief for your Perrysville convenience store mural tag if I didn’t live only a mile and a half away and had to bike right past the place that same night.

Get creative. Find a tag just barely within the box. But maybe do that in summer. We’ve had tags sit for a week or two in the winter because it’s just so difficult to go exploring when it’s cold or nasty.

I would like to start a new find the tag kind of thing. What should I do to organize it on this forum?

We did have an active second tag game a while back, called “Wheelset of Fortune”. The way it worked, there were two active tags. You had maybe a week to find anything that fit (it wasn’t an exact spot, more typically a category). If you found one tag, you got one entry into the drawing for the next round. If you found both tags, you got two entries. At the end of the week, all the valid entries went into a drawing for the next two tags, assigned to different people. They chose a thing (no initial tag photo necessary), set the end date, and the game continued.

I would like to start a new find the tag kind of thing. What should I do to organize it on this forum?

At one point, @steven initiated an alternate game: A ‘leader’ posted a pic, then others posted their takes on the same subject. The leader then picked one post as their favorite; its originator became leader and got to initiate the next round. It worked for a while but eventually faded out. I participated for a few rounds, but then I’m a sucker for snapping pics whilst riding about… [please correct my recollection]

On reflection what makes T-o-R work is a clearly defined criterion for winning a round: you’re the first one to snag and post the tag. Everyone can agree that it’s an objective criterion. That whole “brucing” thing reinforces the rule. In contrast the @steven version introduced a subjective element. Whether good or bad, it didn’t really catch on. I conjecture it’s because it didn’t have an objective definition of ‘winning’ (and consequent reward). People want that.

So:
You’re welcome to come up with a new game. But you have to design it in such a way that people will want to participate, and you need to figure out the right incentives. People do not do stuff that does not provide them value, on some level.

Stu and I have different accounts…
I always love how memory works (i.e. not how we think).

That being said , this current tag should be an easy pickup for someone.  If you get it, @z, you can set the next tag. It is probably a 3-4 mile ride from Aspinwall.

So, it’s about that time for a hint… But I get that people might not be all that up for riding off to get wet and cold just to pick up some random tag. Well, ok, there’s a few of us who might be.

Judging from @edr’s comment, it seems like this tag is not all that obscure.
But let me know if y’all want a hint. (Trigger Warning: May provoke poetry.)

From the poem, I am assuming it is somewhere in either North Oakland or western Shadyside. I can tell it is a church, so I will look in that area tomorrow since the weather is supposed to be nicer.

I actually found it. I just have to go there with my bike and get a photograph. After I get the photograph, I will have to find a nearby hotspot to upload the photo.

As someone who curses the photo upload process here I find that you can say “I found it.  Here is a link to my Twitter pic of it which doesn’t end up nicely placed in the feed, I’ll fix it when I get home” then that’s good enough for most people not to Bruce you.

Lookin’ good.
But you could have a clue to go along with the pic…

The Linden Hall Tea Shop is across the road.

I got bored, so I calculated the geographic center of the 1,350 past Tag-o-Rama tag locations.

Then I calculated the distance of every tag from that geographic center.

Then I calculated the standard deviation of those distances.

Then I plotted the geographic center on Google Maps, with circles at 1 and 2 standard deviations out. In a normally-distributed population, 95 percent of points would fall within that outer circle.

Then I called out the person guilty for placing the tag that’s farthest away from the geographic center.

Then I came here and posted about it. Here’s a link to it.

Does the diagram include those outside the box? 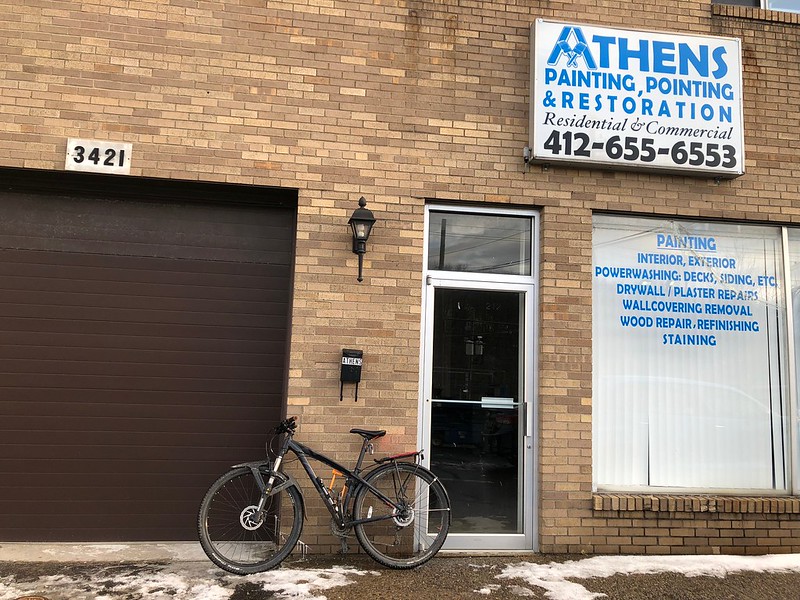 Congratulations! You got it.

@ZZ: It’d be pretty worthless if it didn’t. Whatever Steven’s Sheets doc had, I used.

note, but not a tag: Near Athens Painting, you can take care of all your Bigfoot statuary needs. 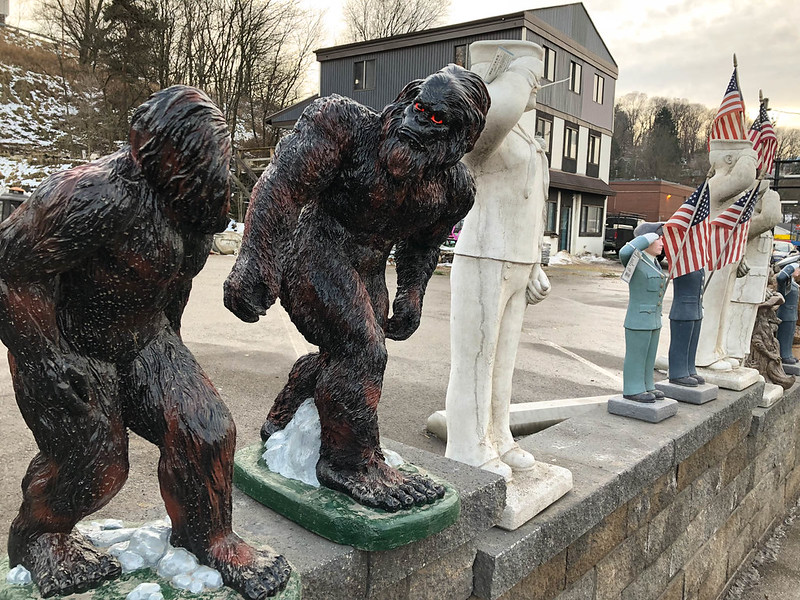 He was guilty of driving while black 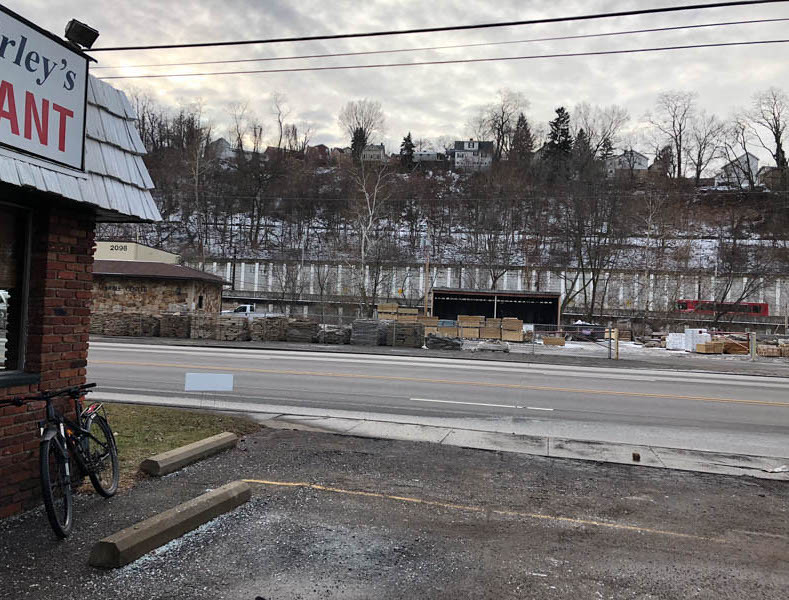 Was that an allowable “distance” from the “Box”?

To explain: at the time, there was a note on the map that said, “tags outside the box are allowed.” That was changed after my tag. I was thoroughly chastised for the tag at the time and for some time after. I offered to retag if no one picked it up. But someone did. And now that tag is part of Tag-o-Rama history.