Zz, you can be near the box but too far outside the box and it takes longer to pick it up and the game moves slower. So far your two tags have been outside the box.  Why don’t you concentrate on the next few being in the box?

Wasn’t my Aspinwall tag at 321 Blink inside the box?

hint 3: the incident in question happened before this paper was written:

‘Driving While Black’ and (All) Other Traffic Offenses: The Supreme Court and Pretextual Traffic Stops

For me, it’s the most fun when the thing itself is clearly identifiable as a thing, clearly interesting as a thing unto itself, but hard to figure out from background context. Not being able to find it on StreetView is a plus, but it has to be a publicly accessible spot.

Some of my favorite tags over the years:
* the fountain in the courtyard at the County Courthouse
* the first one I ever picked up, a big anchor I couldn’t possibly pick up

* the little people in the Allies parking garage

Also, I will say it was fun re-reading the first 25 pages of posts on the first thread. Even with half the photo links broken, it was fun seeing what we all shared with one another. It also makes me wistful for when we had 40 or more active participants in the game.

Got It. Frank and Shirley’s Restaurant. 2209 Saw Mill Run Blvd

What was the DWB clue?

I think that’s where the police killed Jonny Gammage.

Does anyone need a hint?

You got it. Some history:

“At 1:47 a.m. [October 12, 1995], Jonny Gammage was asphyxiated to death by five white police officers in the Pittsburgh, Pennsylvania suburb of Brentwood. Within seven minutes in police custody Gammage died.

Brutally assaulted, Gammage died of suffocation when the police stood and kneeled on his neck, shoulders, and waist as he lay handcuffed and shackled, face down on the pavement. His crime–being a young Black man in a late model sportscar and putting on his brakes “in a suspicious manner” as police followed him through the suburban roads of Brentwood and Overbrook. Gammage was unarmed, and even the D.A.’s office found no reason why Gammage was stopped by the police that night.”

The criminal cases against the five policemen that took part in the killing of Gammage resulted in an acquittal and two mistrials. The police received no criminal punishment. The civil case resulted in a settlement where the Gammage family received $1.5 million.

That was tragic. Racism at it’s worst.

I believe that side of Saw Mill Run Blvd. is actually Carrick, not Overbrook as the article states.

Those are not cats.

Does anyone need a hint?

Describe something maybe a few doors away (pizza shop, library, statue), or a rhyme based on the street name. Something that won’t give it away too easily. There isn’t much context in the photo. Like for your Perry Hwy mural last summer, you might have mentioned there was a funeral home across the street. On a good day, I will write a poem or quote some song lyrics that provide some context.

This tag is not visible from StreetView and is 1/2 mile from Cattivo. 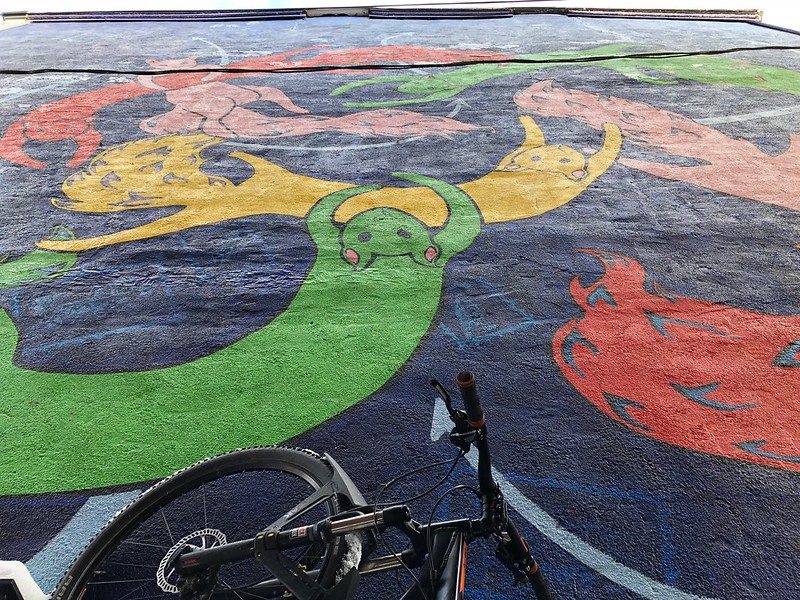 new tag, involves 30-300 ft of bike walking, depending on whether you’re comfortable biking on a snowy trail 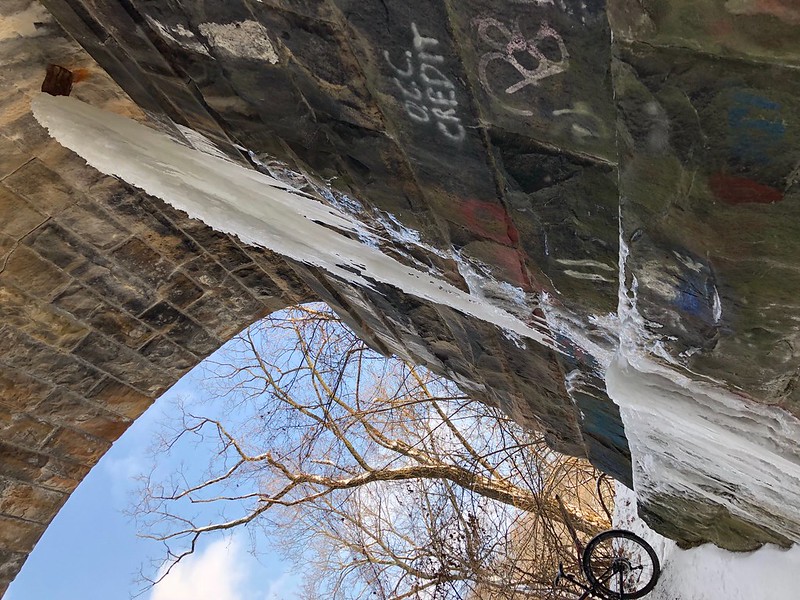 hint: the cats are bronze

Hint: it’s tough to get to.

This one was a toughie. It’s in Schenley Park on the trail next to Anderson Playground, in the archway next to the trail (a steep scramble).

The “big cats” clue would have been more helpful if it was not in the plural. “One big empty cat” would have been closer still, i.e. Panther Hollow Road. There are lots of pairs of lions in the area, and quite a few are near bridges. Where are these bronze cats? I’m drawing a blank. 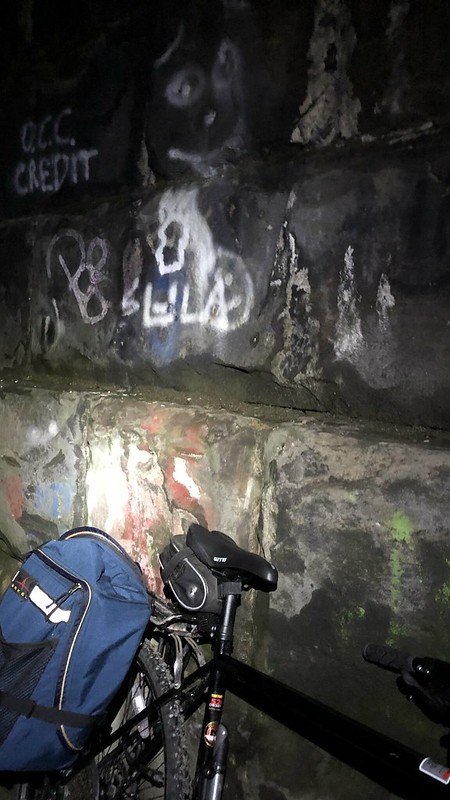 There are bronze panthers at the ends of the Panther Hollow bridge.
I knew where it was pretty much after the second clue. But it was hard to get to. Definitely not bikeable.

It wasn’t easy, but it was bikable when I went there: 14F, ground frozen, 3 inches of powder on a short stretch of trail. We’re intrepid Pittsburgh tag-o-ram-ers, so we push through it, right? 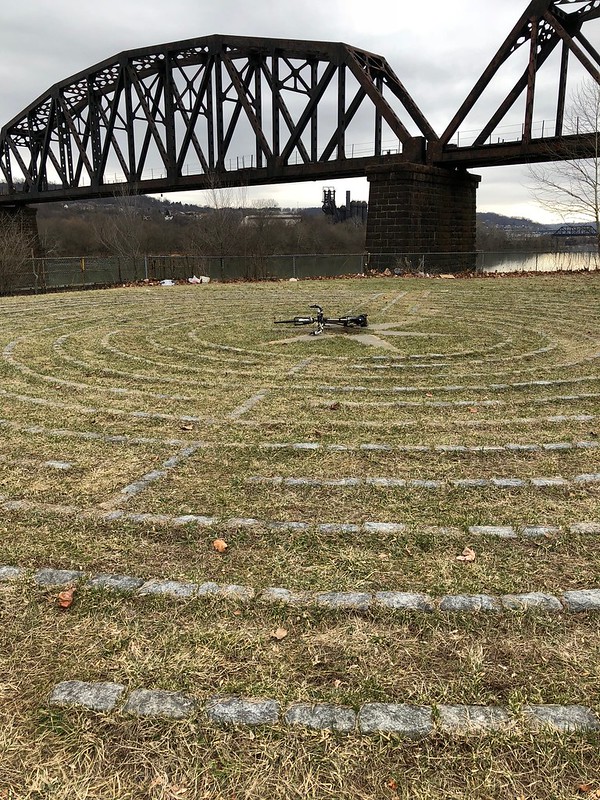 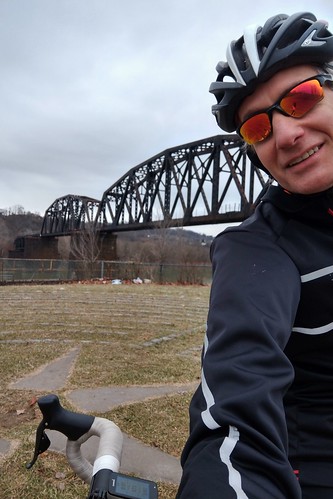 Homestead Labyrinth, right by the pomphouse… 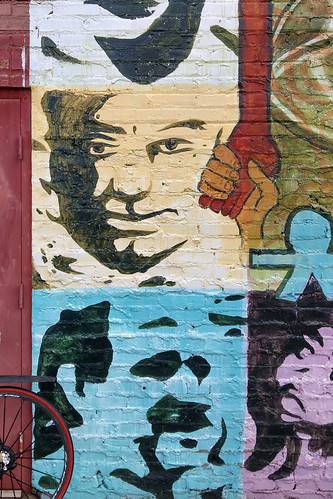 I get knocked down, but I get up again
No you never gonna keep me down…

OK, so Chumbawamba made WYEP’s list of Worst Songs ever. Am I close?

I’m not at liberty to provide another clue… ;^P

Okay, okay, I’ll make it a little easier. I’m surprised this one hasn’t been used before; it’s been around since 2008 and is not far from a well-used bike lane.

This Westmoreland PA county native made a fortune in Pittsburgh’s railroads, before notably writing,  “I am Denver City.”

What, have you all fallen off your bikes and can’t get back up? Makes me feel bad for Kyle Holbrook…

“We Fall Down but We Get Back up” mural by Kyle Holbrook, Paulson St & Dix Way. http://www.pghmurals.com/Kyle-Holbrook-354.cfm 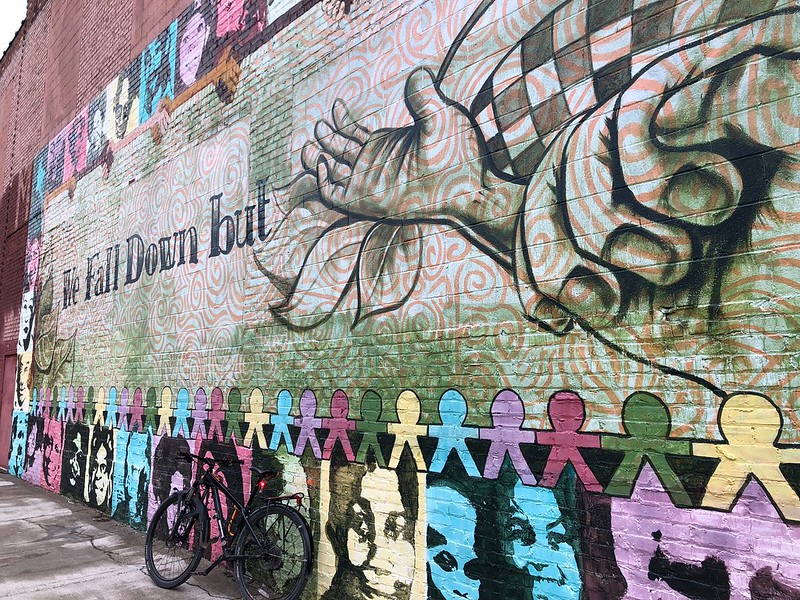 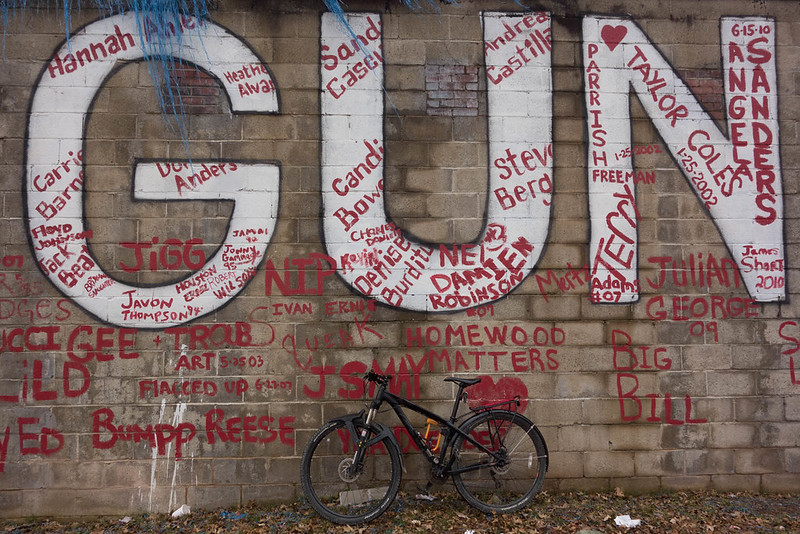 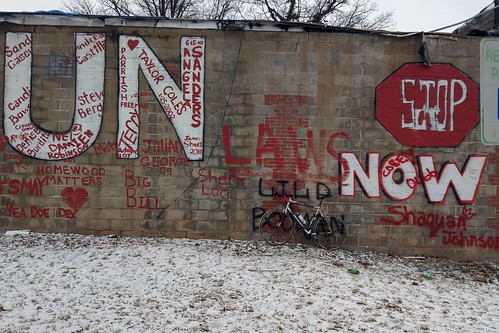