Re the “speedy” comments on my last two pickups… Heheh heheh…

This time of year, if a tag’s within a couple miles of home, I feel compelled to jump on it quickly, since there are fewer “accessible” tags in the winter because I’m not gonna ride out to Ambridge in this weather, or even up Mt. Washington, since I’m still worn out after Doze Dirty Dozen.

Gottu admit, tho, I need to research some more future tag drop locations; my list is starting to look kinda meager.

This tag, it has a newishness: 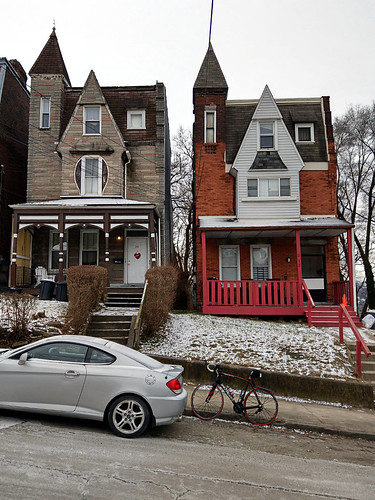 Tomorrow is Saint Valentine’s day,
All in the morning betime,
And I a maid at your window,
To be your Valentine. 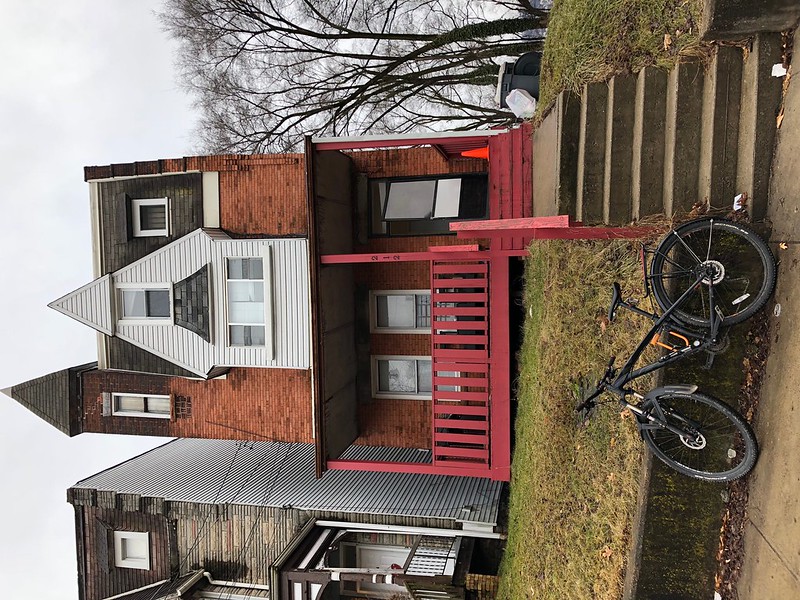 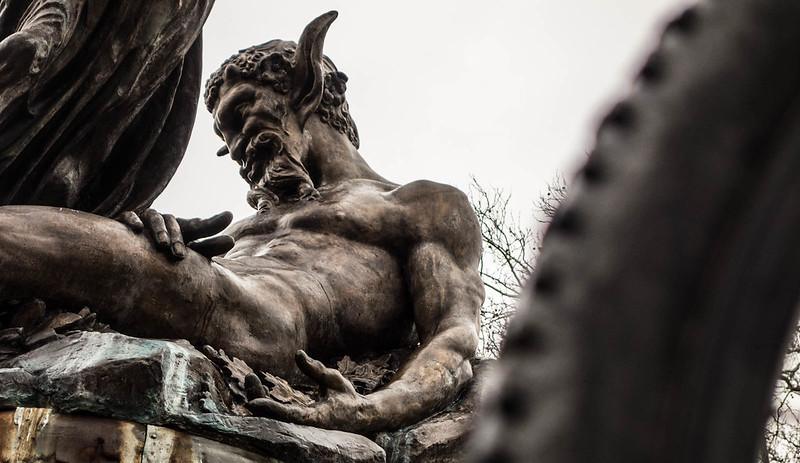 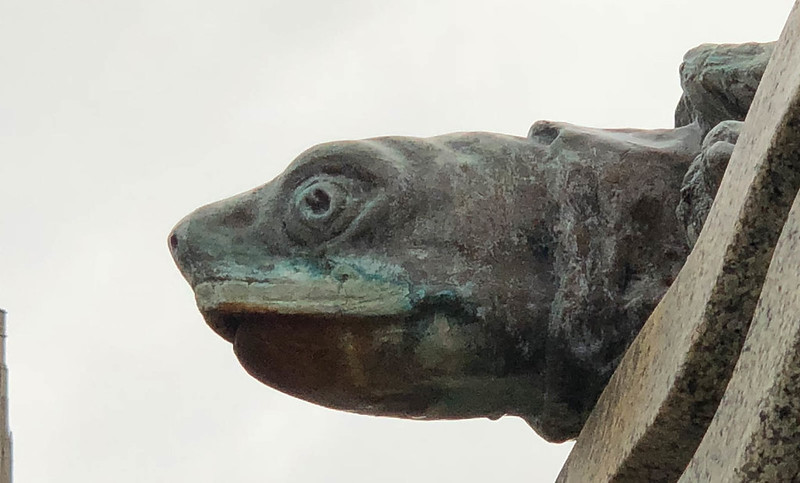 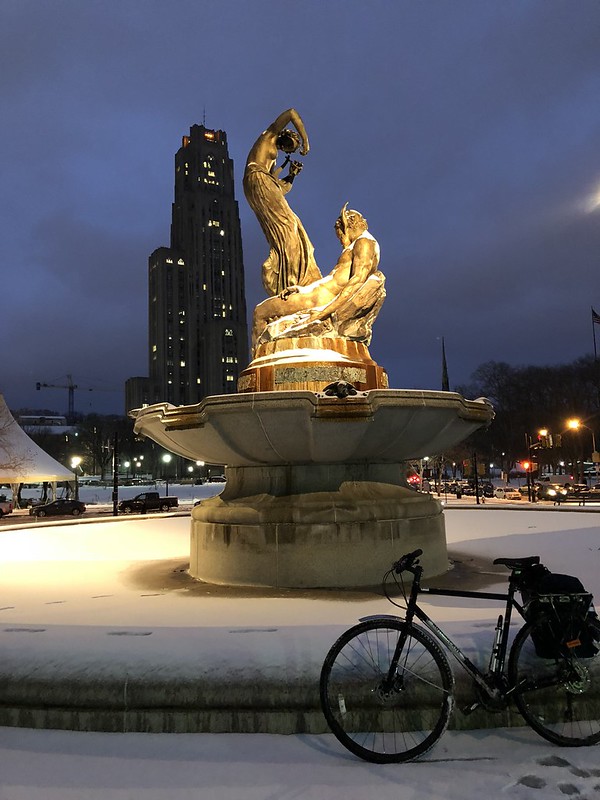 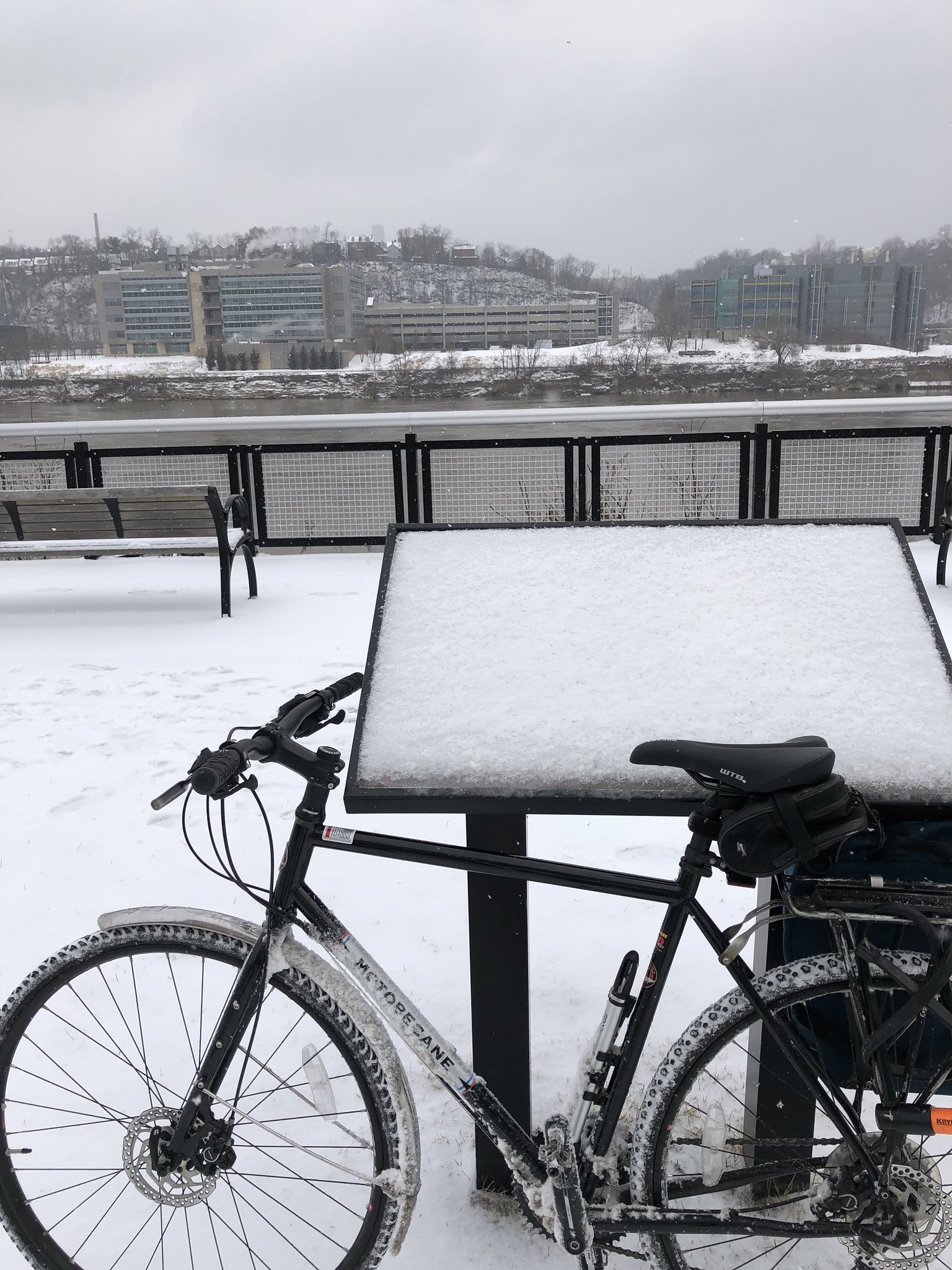 It’s the thought and effort that counts. 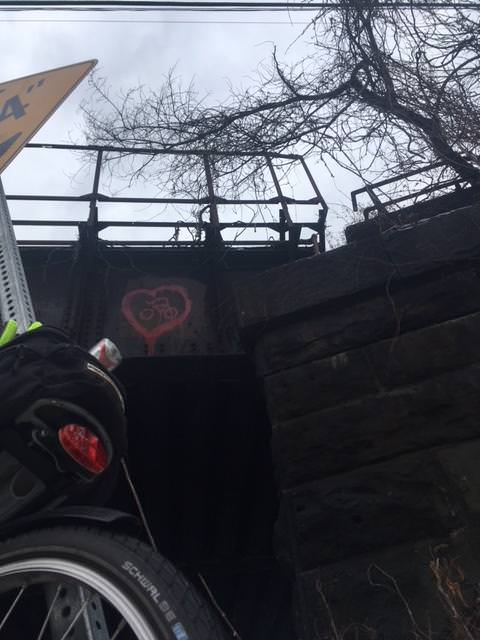 Not sure why the photo wouldn’t show in the previous post.  Happy Valentines Day.

I could use a hint.

I was planning on saving you the trouble, but there’s an enormous pile of nope outside… 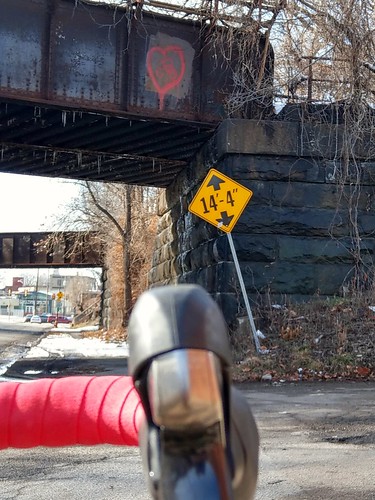 Looks like that pile of nope is gone… Hamilton by the Wheel Mill.

You really don’t need a clue for this one, do you? 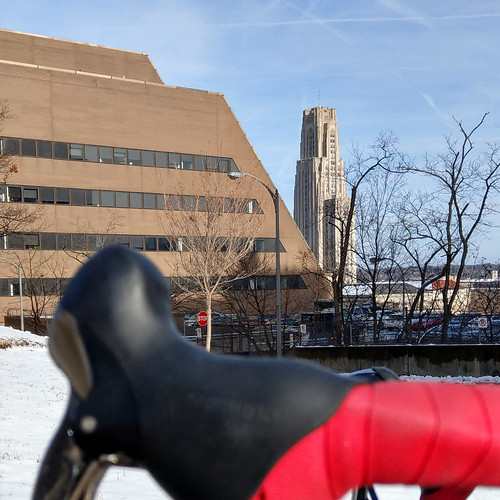 I only worked in the building next door for 15+ years…

No, you don’t need a clue. It’s about ~10m from a tag I dropped a few ago. But it does face in the opposite direction…

Too bad I have a bum foot just now, but I expect @ph will shortly be on the case.

Clue: It don’t count until you ride there and post a photo!

There’s nothing in the rules that says a tag can’t be claimed by the person who placed it. Just sayin’…

Find the tag and get a picture of your bike in the same location (as best as possible). The first person to post a found tag gets to place the next tag.

If @ornoths’s assertion were correct then “The first person” would have been “The person”; “first” implies an ordering. If you think about it, the dropper is technically the 0th person in the picker-upper queue. Otherwise “first” is redundant.

So, close, but no cigar.

I agree with @ornoth on this one. It’s a loophole in the rules.

Anyway, people will get your tag. Just keep posting clues, making it more and more clear, until someone does. No need for self-pickup.
There are other loopholes. Two or more players can conspire, one setting a tag that there other picks up. Again, not clearly against the rules, but clearly against the spirit of the game. Do let’s not do that, either.

There is randomness involved here too with people’s schedules. Sometimes we have more free time, sometimes not.

All these mass shootings reminds me of the time I was trapped in the building next door to where this photo was taken. The bike component of this is after we were let out by the swat team I picked up my bike from the shop in sq hill.

Okay, clues were requested, so let’s see what I can do for ya. I guess my sense of what’s easy & difficult is still inaccurate; bear in mind that I’m a recent transplant. And @ed’s point is well taken; I forget that, as an unemployed bum, I have more time to devote to figuring out and chasing down tags than most folks. 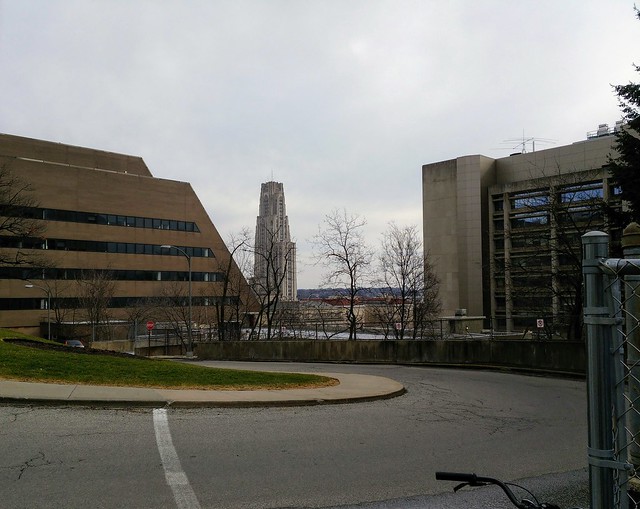 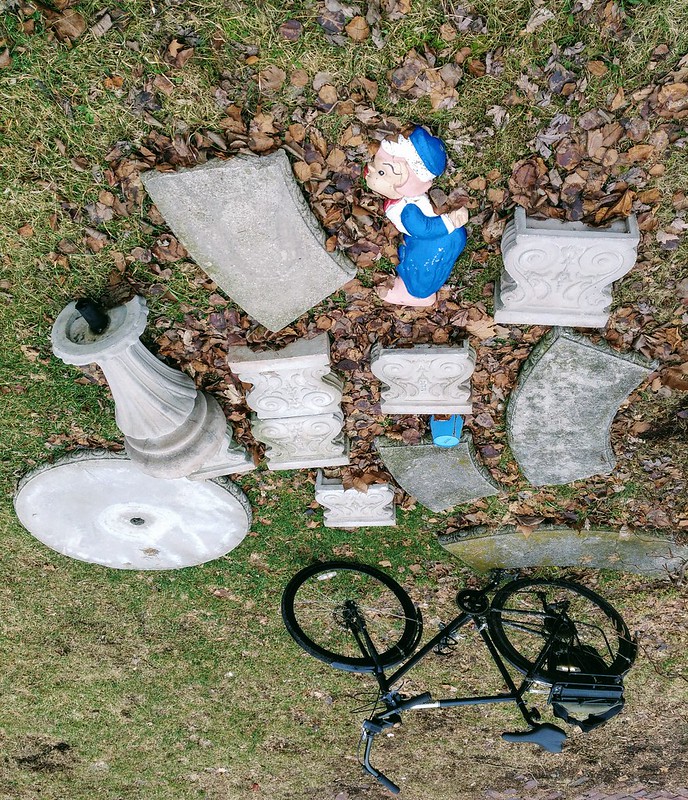 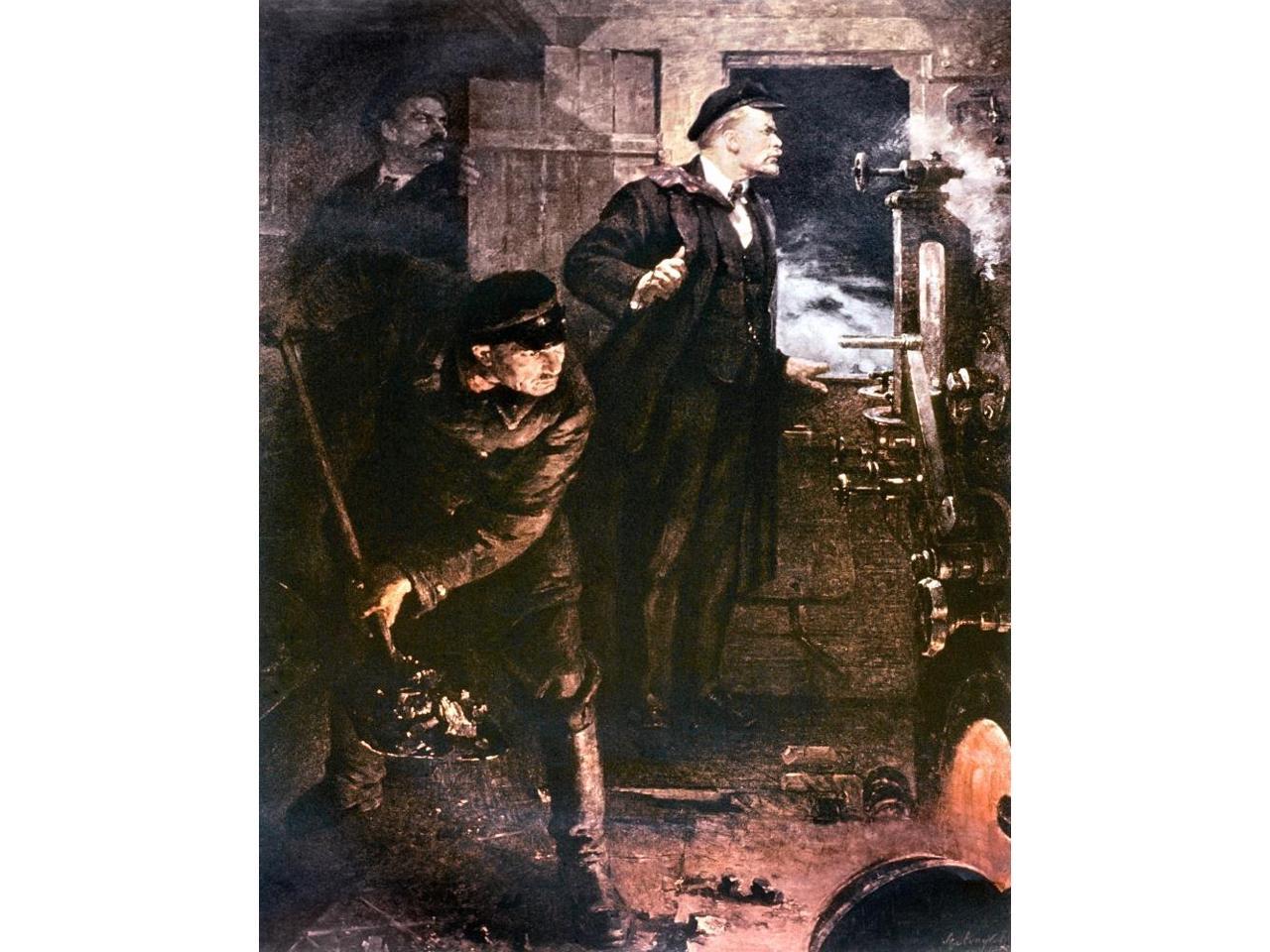 Is it time for a hint?

The clue is the clue because the painting was apropos of the destination.
But Sankt Peterburg also has the similarly apropos, though boring, Varshavsky Voksal: 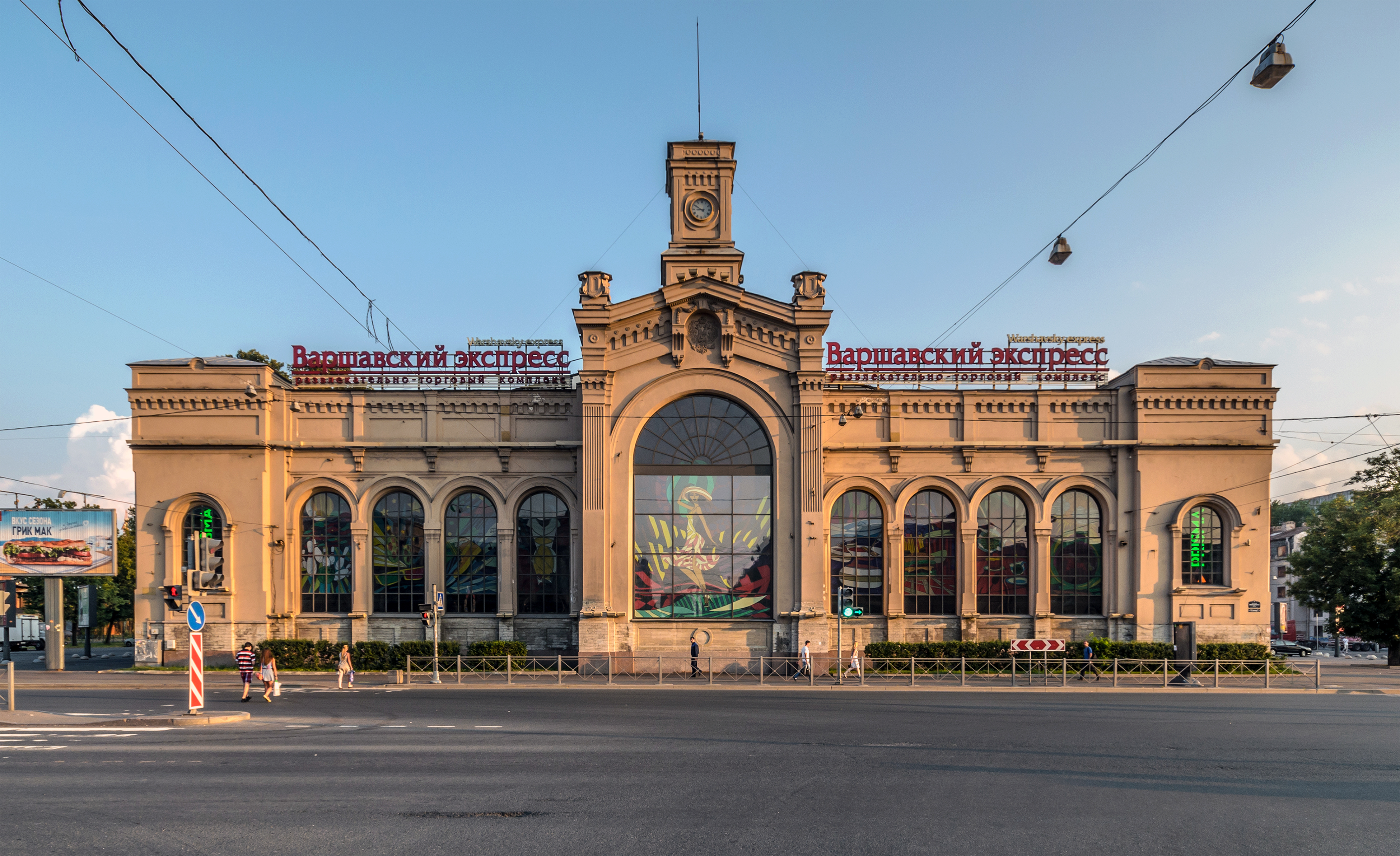 But are the clues enough to give you ideas about the location? You’re allowed to google.

Each clue (almost) gets you to a word relevant to the location, which is at a corner.

The first clue (properly google’d) gives you one of the streets.
The second clue (properly dereferenced) should point you to the neighborhood.
The third clue, alas on reflection is a bit misleading (it was meant to give you the cross-street). But only half of it is actually relevant; maybe it was a misconceived obfuscation.

Here’s the Strava heatmap at the location, showing the tag to be on a well-traveled bike route. 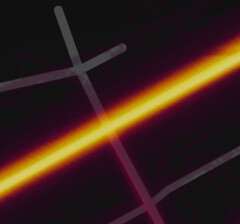 ARGH!!!! I went and checked that exact road today, but I checked the wrong half! No one told me it was one of Pittsburgh’s maddening discontiguous streets! ARGH!!!! 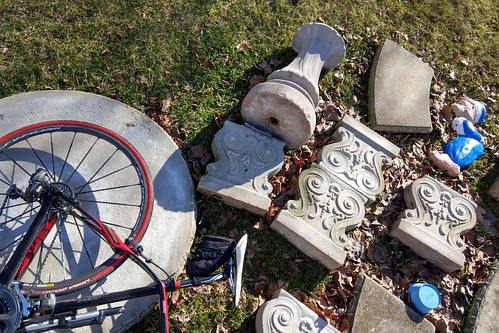 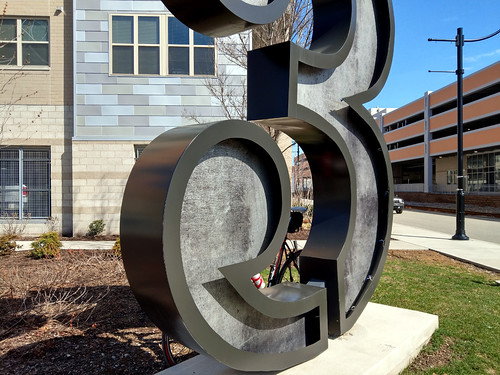 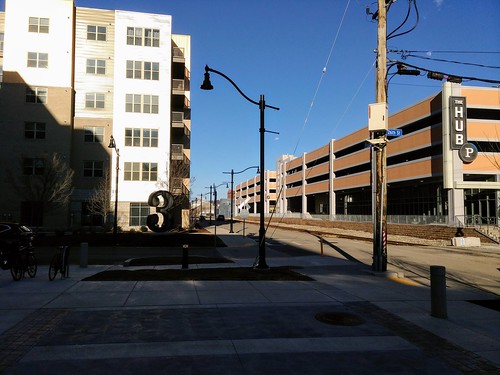 Railroad at 26th, in the Strip.

The big 3 is at a new development “3 Landings”. Of course they have bike racks. 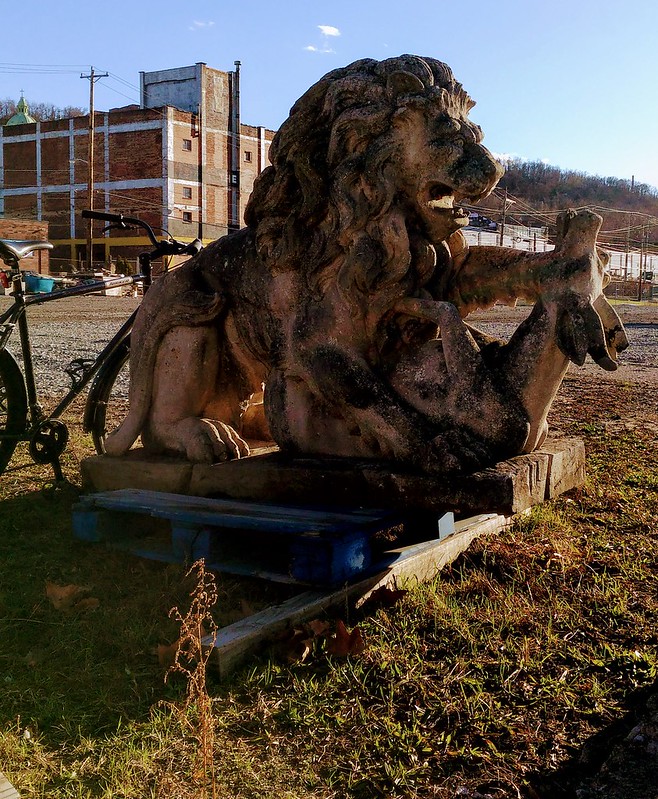 Wouldn’t have gotten this in a million years if it weren’t for the dome. 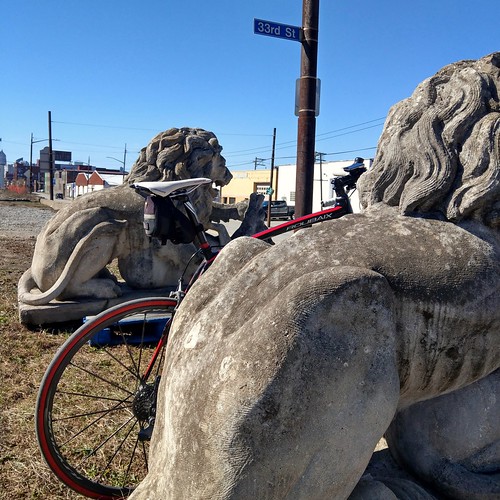 Good job. There’s two domes visible from that spot, but I had figured that would be too much of a giveaway… Does anyone know where these lions came from?

A tag a day keeps liposuction away… 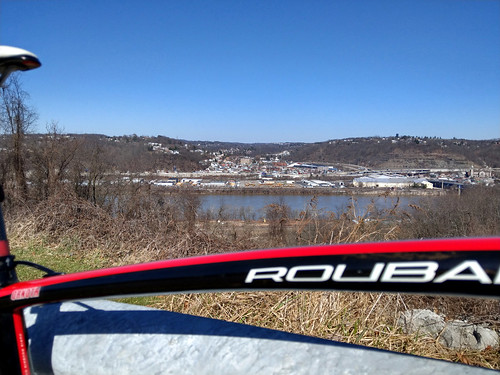 LOOK DOWN DOWN LOOK!!! Perhaps the only place where you can look down from (near) the top of one Dirty Dozen hill and see the next. 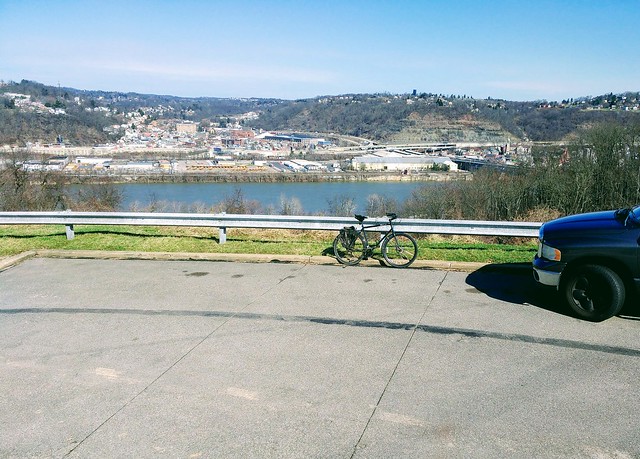 Downlook is one block away from this famous incident: “On April 4, 2009, a shootout occurred at 1016 Fairfield Street in the Stanton Heights neighborhood of Pittsburgh, Pennsylvania, United States, stemming from a mother and her 22-year-old son’s argument over a dog urinating in the house.” Three policemen were killed. “According to police and witnesses, he held police at bay for four hours as the fallen officers were left bleeding nearby, their colleagues unable to reach them. More than 600 rounds were fired by the SWAT teams and Poplawski.”

I always had trouble with that neighborhood with its twisty little streets, all the same. And I invariably get lost (like I did today). A few blocks away is Officer Eric Kelly Memorial Field, named for one of the victims.