The EXIF info for Paul’s shot says it’s a panorama. Looks like a typical panorama artifact.

The car fragment was a result of the panorama software.

One thing Harriet Day and Leone Evans had in common, though not simultaneously, was their husband, John K. Tener, the baseball player and PA governor. Homewood Cemetery, Section 12-3, Lot 102. 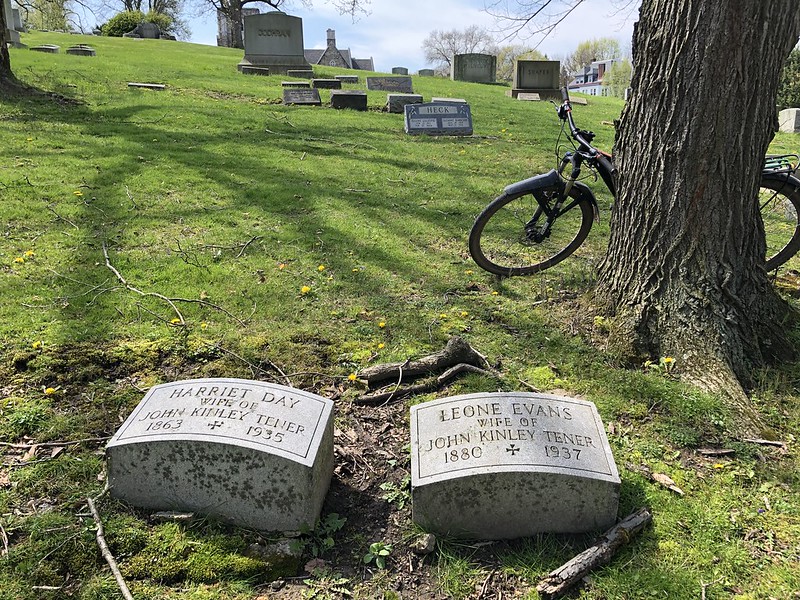 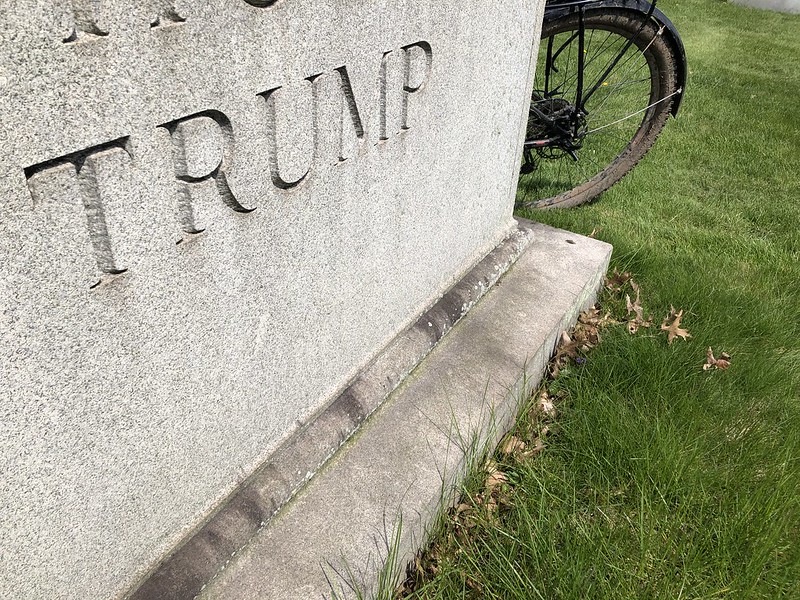 Nice picture.  That makes my day! 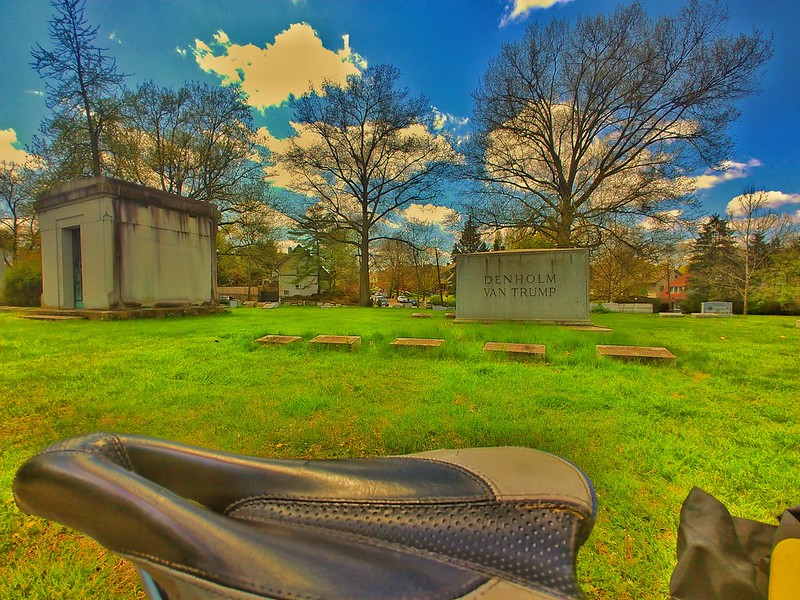 In keeping with the current theme, this is outta the park, beyond the box seats, but not the farthest, so kosher. Another Cooperstown resident. But you knew that.

My brain doesn’t work like a lizard so I have a hard time interpreting these clues.  Does it mean a cemetery somewhere behind the baseball stadium? I am not familiar enough with historical players names to know who this might be.  Dre…..?  Drew? Bensv…? Bensvosser?  I have no idea, and don’t even know which cemetery to go riding around in.

Well that was interesting- I now know who it is, and exactly where he is buried. Oh my gosh, does that mean I am starting to think like The Iguana? That’s a scary thought!

it’s long way from home, but might make the trek up there this week. Got nuthin’ else to do. 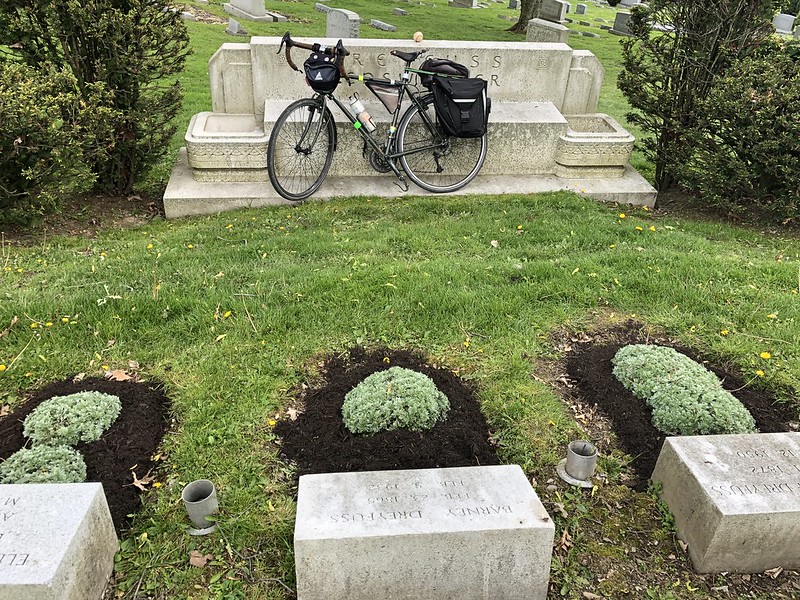 Hall of Fame Major League Baseball Team Owner. Born in Freiburg, Germany, he emigrated to America in 1881, enjoyed the game of baseball and organized amateur baseball teams first for the distillery workers, then semi-pro clubs around Louisville. In 1890, he obtained part ownership of the Louisville Colonels, then a Major League team in the American Association and in 1899, he acquired full ownership of the Pittsburgh Pirates National League team. During his 32 year (1900-32), reign as president and general manager of the Pirates, he built the first modern steel-frame tripletier stadium, Forbes Field, in 1909 and is credited as the innovator who created baseball’s World Series. The Pittsburgh Pirates finished in the first division 26 times, winning six pennants in (1901-03, 1909, 1925, 1927) and the World Series in 1909 and 1925. Dreyfuss was also a pioneer in professional football, as co-owner and manager of the Pittsburgh Athletic Club, winners of the pro football championship in 1898. He died at age 66 in New York City and at the time of his death, was vice president of the National League. In 1979, he was inducted into the International Jewish Sports Hall of Fame and into the Baseball Hall of Fame in 2008

I feel like I should give an explanation on how I deconstructed the Iguana’s cryptic clue.

Suspecting this was a baseball player with a name related to one of the words on the bench, I looked for cemetery’s pretty far up on the Northside (outta the park, beyond the box seats). West View Cemetery had a search function so I looked for names starting with Bens or Dre. Did not notice the small grave that Mr I. carefully included the rest of the name (fuss) and date of death (Feb. 5  1932).  The search function showed a picture of the Dreyfuss plot, and I had heard the name of Barney Dreyfuss, but did not know he was not a baseball player (outta the park- on the sidelines, or beyond the box seats but rather in the team offices). 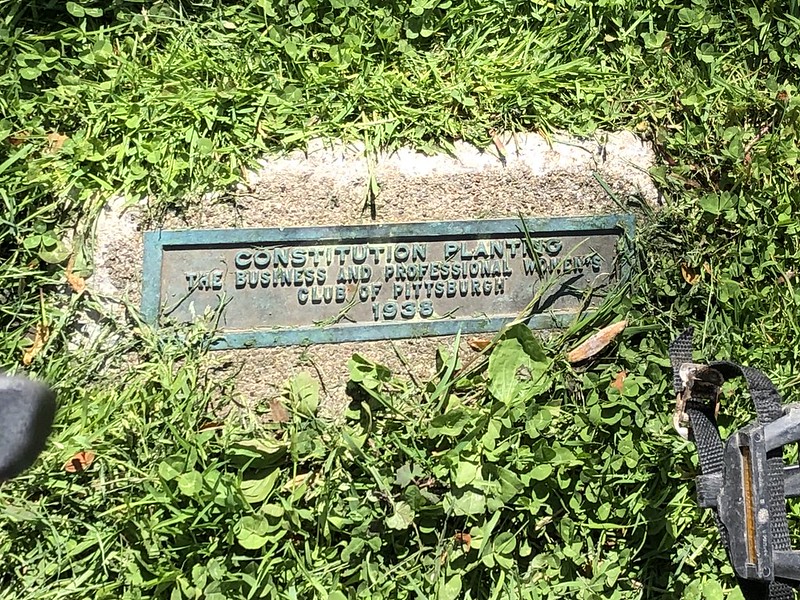 Ms. Crogan, recently betrothed to her husband Edward, gave the land for this park to the city 49 years before this plaque was installed. If I had given this spot a bit more than the currently requested distance by stepping backwards, I might have become a statistic.

I spent almost an hour searching the park. I didn’t find that plaque, but I did find this:

Another clue- the road I might have become a statistic on has the same name as a Northwest Indiana High School who’s athletic teams are called the Brickies.

Mother deer will sometimes leave their fawns while they go off and feed, with specific instructions to not go anywhere until she returns.

The original hint was not very revealing (and yins complain about my hints), not that it mattered to me, as I have seen and photographed this plaque before–in fact, I recall going passed it in the last week or two. It was one if two places…so I thought. I was to to take a gander on Friday, but more pressing business was …more pressing… yes, there are more important things than tags. Saturday was amenable for a late day ride. And to snag the tag…but the locations I had in mind were not fertile; so I moved on; life is not the tag–the idea is to ride rather than spend an hour chasing geese… But I did find the parents of a fawn under a tufa bridge (a natural tufa formation can be found on the GAP east of Cedar Creek) as well as a five-petaled Quaker Lady (bluet)–quite unusual: 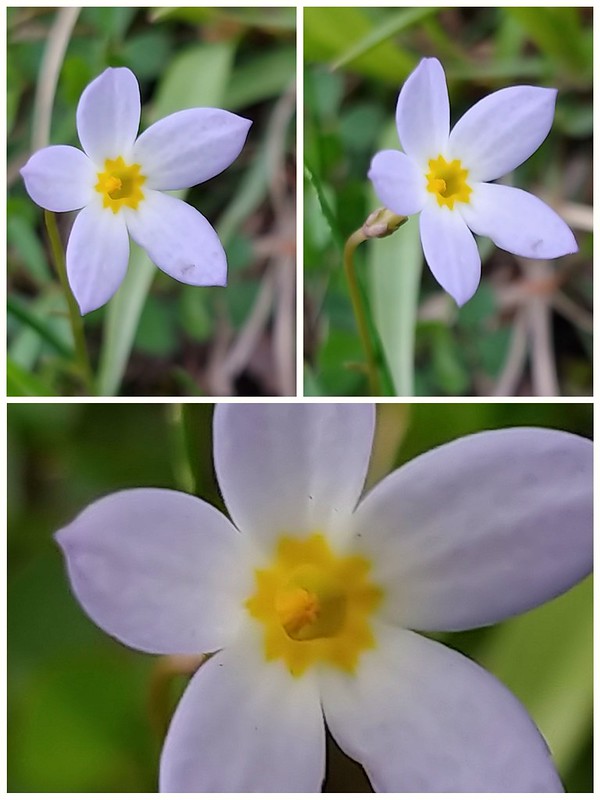 … moving on… maybe I’d recall the location…or not. At The Point I checked my e-mail and noticed more activity on this thread. A new hint…and then it came back, the exact location; I could see it in my mind’s eye…even in the dark:

Hobart, near the confluence of Greenfield Rd, Bartlett, Panther Hollow Rd, and Bartlett. A plaque commemorating a tree planting in honor of the sesquitennial of the Constitution by… 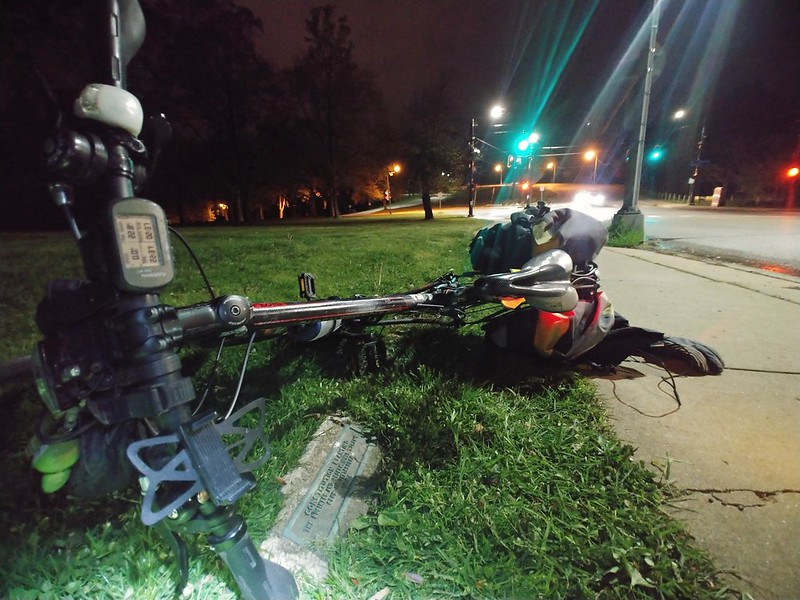 [And please continue to complain about my hints…]

…missing the Buccos? I thought so… so here’s another baseball tag… not in any parks related to Crogan’s daughter. But in a park…though she did have some influence in a nearby park…and this guy ran for President. Ride to fight the virus. 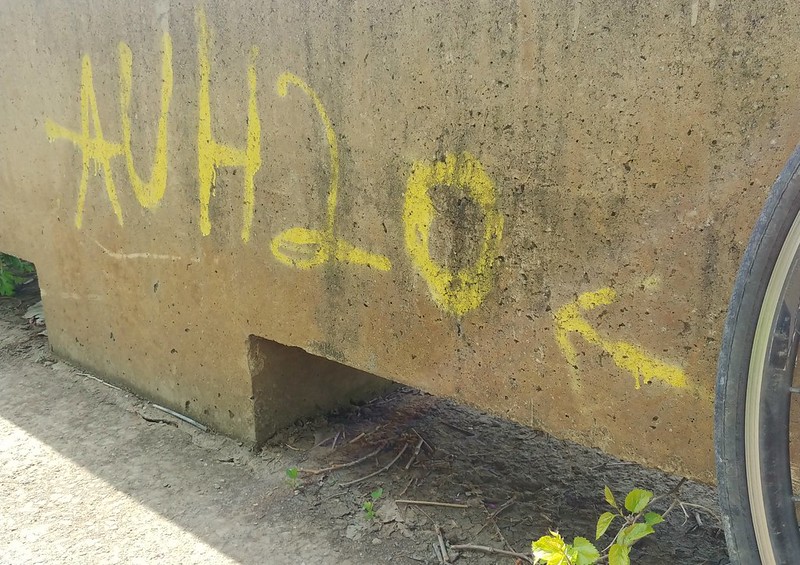 Steve’s field? I checked there but didn’t find AUH2O.

I am pretty sure I saw this in my travels, but don’t remember where.  Did get to see some baby foxes while looking for it yesterday, which is always a good thing.

I’m sure you have. Indeed, with the warm weather, there have been quite a few foxes… and some cougars as well…. not to be confused with the panthers we typically have in this area…

By “this area” did you mean Oakland in general, or “this” being more specific to the tag location?

I can’t attest to the clearness of my hints…that’s a personal matter… I may be able to give another hint.

The recent questions have not been very clear…talk of Steve and foxes…???

The above is not a hint…as far as I know.

The point is you should focus on conventional wisdom…and center your search there…and maybe you’ll score.

Steve as in Steve Forbes, of course

Oh, Malcolm… well, why haven’t you gotten the tag… giving Dave a chance?

AUH2O, Riverfront trail opposite PNC Park (a bit downstream of the Clemente Bridge) 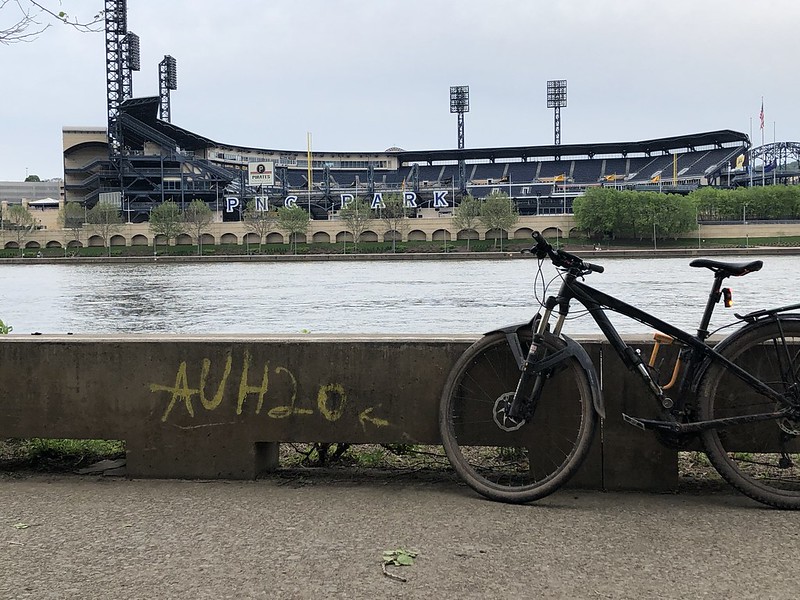 I just did not ride down the trail far enough.  What nearby park did Mary Crogan Schenley have what sort of influence in?

new tag. let me know if you need more hints (beyond what’s in the picture) 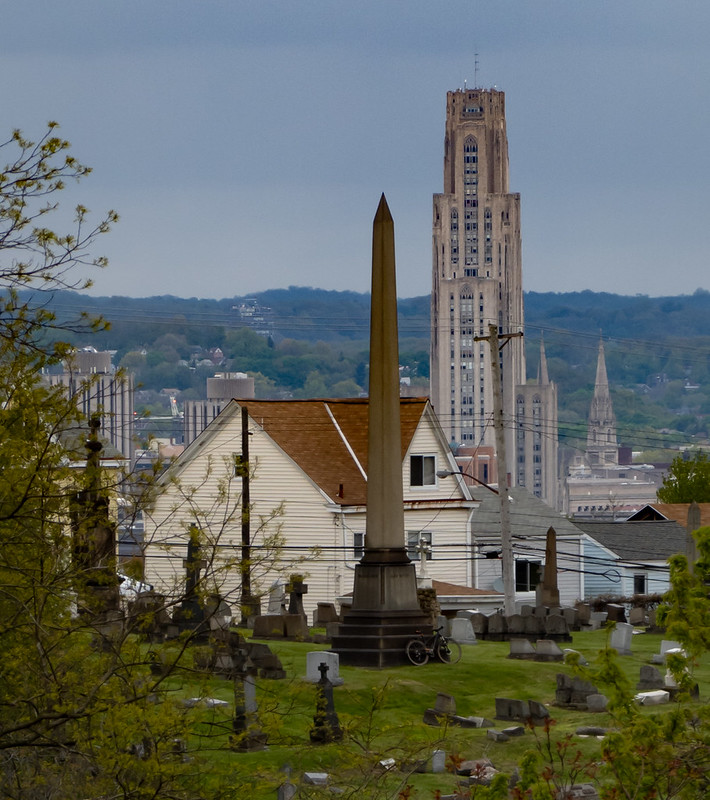 Mrs. Schenley owned the Blockhouse and was instrumental in preserving that area for development in a park rather than industrial development…an interesting story in its own right. 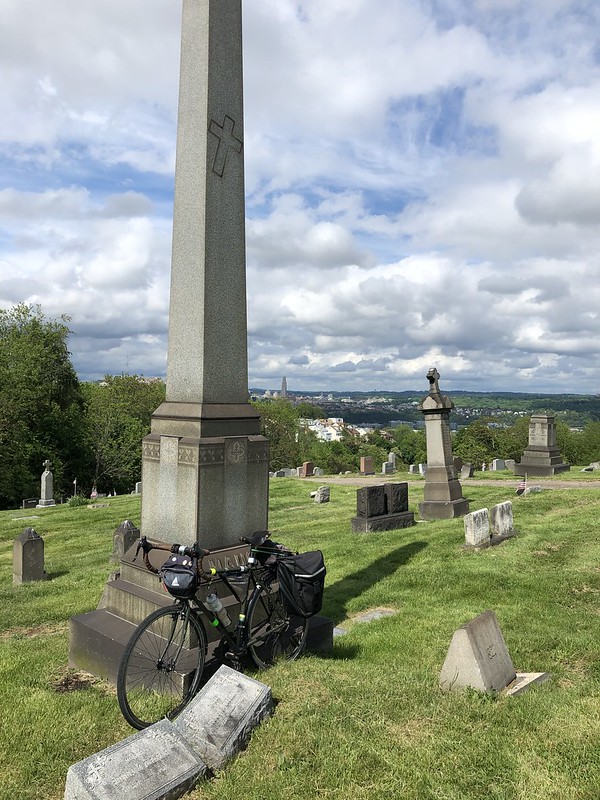 lots of cemeteries up there, not as many obelisks.  Neither of these are the right one.  Spent a good part of the afternoon looking unsuccessfully.

Sorry, that’s not the right obelisk. Here’s a second picture of the tag obelisk. Note the building in the distance at left. 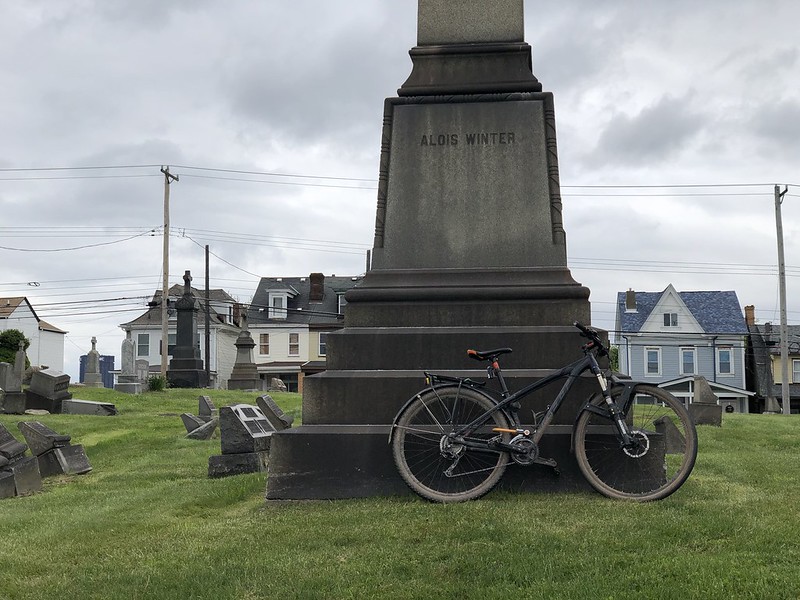