Being Jewish and a Pittsburgher I knew nothing about this place. I found this city paper article from years ago that just seemed wrong and someone confirmed my suspicions in the comment section. Which is probably the only time in history that the comments have been useful.

Bottom line, in Judaism if something says Congregation it is/was a working synagogue. If it was just a school or a social center like the settlement houses it wouldn’t say Congregation. But the other bottom line is that there still isn’t much known about it.

This was a cool tag. 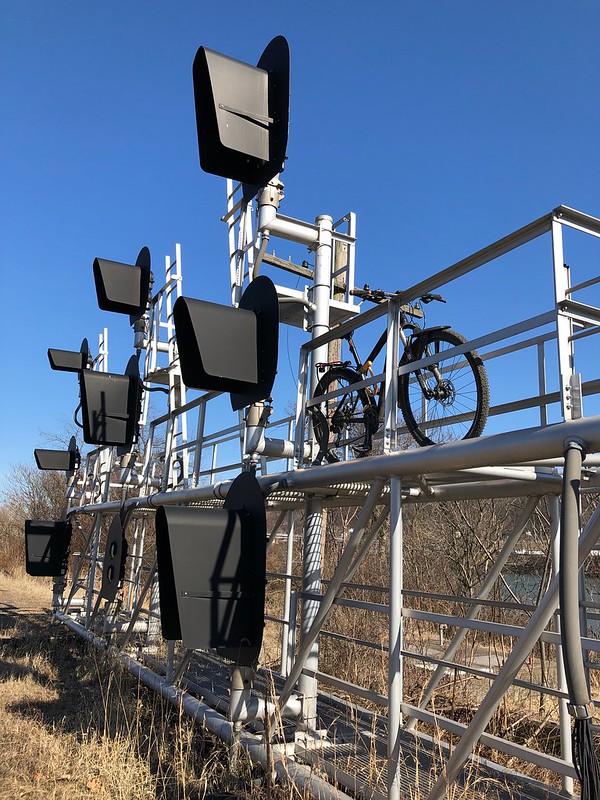 but this one..about 1000 feet west of first location..

What’s weird is that a really obvious tag in the center of the east end (‘Sliberty Presby Church) went unsolved for 2 weeks, but a tricky tag across a river in no-man’s-land (above) got picked up in 1 day.

This game isn’t over yet. 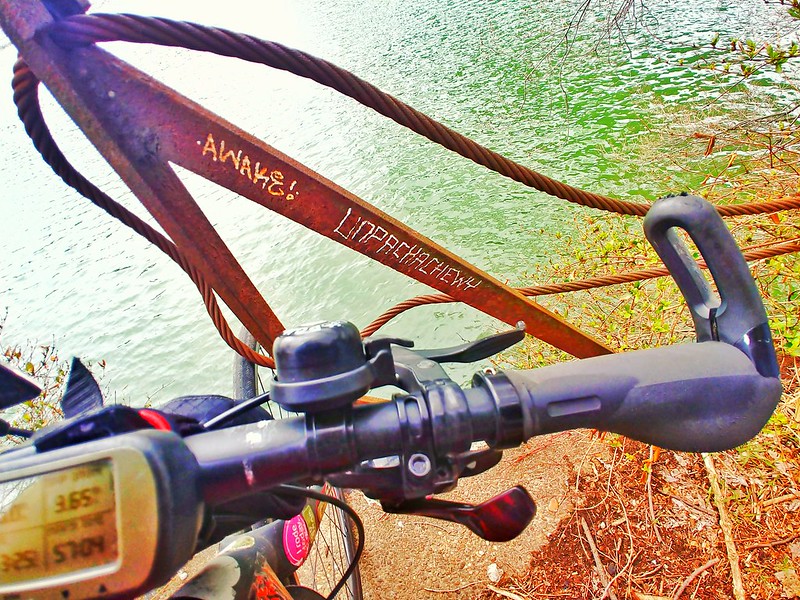 North, South, East, West…
Three it’s on,
but two it’s not…
the shore ends at the river…
…go figure…

It was not where I suspected. With so many words in the hint, it’s hard to know which to ignore.

Others should speak up so The Iguana will know if its hint is sufficient.

All the words are relevant and necessary..at least in Iguana-speak…you can take that as an additional hint.

The hint(s) are surely sufficient. I wonder whether the hintee is sufficient…lacking proper focus…and hot blooded.

I am remarkably dense and don’t do riddles or puzzles well.  So I have no idea where to even start looking for this other than on a riverbank somewhere in the box.

none of the above reasons are anyone’s fault but my own, but just my lame excuse for not picking up tags.

Hot blooded = hot metal bridge? that’s the only thing I got and I figure it is wrong, but I also know it’s on a trail somewhere…. and so is the hot metal bridge. extremely circumstantial evidence here.

My other guess – Lake Elizabeth in West Park. It has the West in West Park and the West and North on West North avenue. and it is on the north shore.

The Iguana is self-conscious about its cold-bloodedness.

Ornoth and Eric might be on the right track. Or not. You never know, when you’re dealing with an Iguana.

Guys, we’re wasting time. I can’t figure this out, either. Four really nice riding days. We could have traded off two or three tags by now.

Yeah, I need an excuse to ride on my lunch hour.

Is it within a 15 minute ride of the North Shore (and DOESN’T require one to clamber down a steep riverbank)?

I have a meeting on Federal St this evening. Could travel via Millvale if I had an inkling that it might be along that bit of shoreline.

What is this across from? That might help without giving it away.

I agree. It’s sad to have this game held up by an overly difficult tag. (I’ve made that mistake myself a few times.)

The text hint does almost nothing for me because every piece of it could be interpreted many ways, and we don’t know if the sentence fragments are connected or disconnected.

The picture, on the other hand, tells me: large body of water, can’t see bottom, 95% sure it’s one of our big rivers; concrete less than 10 feet above water level; trees nearby; bent cable handrail tells me it’s probably old industrial stretch of riverbank (not a rebuilt tourist area as you’d find near Heinz Field, or Mon Wharf, say); if photo was taken mid-day, highlight on water suggests we’re looking SSW.

Metadata (assuming it wasn’t modified and the LG smartphone was set correctly) confirms the photo was taken Sat 3/30 at 1:25:55 pm.

I’m 99% sure this isn’t in millvale. I run/bike the trail 3-5x a week. I think I would remember something like that. Plus, the trail is too high off the water, and when you get down on the water over there there’s nothing between you and the river at that point. The riverbank is also quite sloped over there with a few flood plains full of trash or dead boats/barge parts. nothing that looks like that.

Over/under on when this tag gets picked up?

Never if we don’t get some adequate hints. I vote we revert to the previous tag if no hints are provided in the next 24 hours.

What does reverting to the previous tag entail? We already know where it is. Someone picks it up again and then places a new tag?

I don’t want to get involved with a vote since I’ve been accused of being a tag o Rama whiner before. But whatever anyone decides I’m cool with- more hints. Whatever. To keep the game moving.
I’m afraid if we wait until the tag is stumbled upon it may never be picked up and TOR, which already seems to be hanging on by a thread, will finally die. I guess the counterpoint is that maybe it needs to die?

Can certain cold-blooded lizards find it in themselves to take another picture of the tag, showing some additional shoreline? My hunch is that it’s off the Baldwin trail, one of those little slopes down to the Mon River, but I hadn’t time to explore each one when I was out there last week.

I’m reading the lizardian clues as a north-facing shoreline of our southern river going out past the East End (three it’s on), which has no western component and is not the north shore of that river (two it’s not), and the cable in the cement indicates where a shoreline ends and a cement wall replaces it. But that still leaves a lot of wiggle room. I’d start at the HMB and work my way upstream rather than down. And my chances of getting out that way before yet another weekend are minimal.

I honestly tried. I got on a HealthyRide and explored every accessible spot on the south bank of the Mon from Eagle Lake to Smithfield St, trying to get as close to the water as possible, and nothing.

Above and beyond. I think everyone else has stopped looking (or never started) and was hoping that iguana would eventually drop a clue that was understandable.

Seriously. Even if you do go out looking for it, expect ankle deep mud anywhere near the shoreline. Frankly, we don’t need a hint, we need to know where the damn thing is.

@healthyridepgh Apologies… You might want to hose down 70230. I got into a muddy spot along by Eagle Lake by the trail out toward Sandcastle. The bike is running OK, but there’s residual mud under the fenders. Checked in at Federal/North.

Was eagle lake back? When I went on that part of the trail last week the lake was gone, finally, but the sides still had a nice algae pond going.

Not covering the trail, just the algae pond, as you said. There are a couple other spots between there and Hot Metal that have water crossing the trail, but trivial. They’d be more a problem in winter when they freeze over, but yesterday they were actually helpful in getting some of the mud off. Five seconds or less each. And we did have an inch of rain a couple days ago, so no big surprise.

What’s the general consensus as to what to do as the game is essentially not playable right now?

options-
1. We could just wait. My guess is that this will spell the end of the game for the foreseeable future.
2. Someone who knows the Iguana could reach out to him IRL and see if he’s willing to give us an easier clue. a) If he is, then we can wait. b) If he isn’t, then do we give it to a certain time (maybe 4-30 so it’ll be a month since the last tag was placed) and then someone can post a new tag?
3. we could just shut down the game since interest has waned. Maybe this is the merciful way to put the patient out of its misery- – an unsolvable tag…
4. other options?

I’m mostly interested in just getting us back under way again.

Workable hintage would obviously be preferred… but in its absence I’d be willing to declare it a violation of Rules #2 and #3, and revert Paul’s preceding tag to unclaimed status, as outlined in Rule #2a.

SRSLY, Let’s get rolling, it’s been 10 days since we requested additional hints. At least 2 of us gave it a good try. I suggest reverting to that last tag, Paul’s: 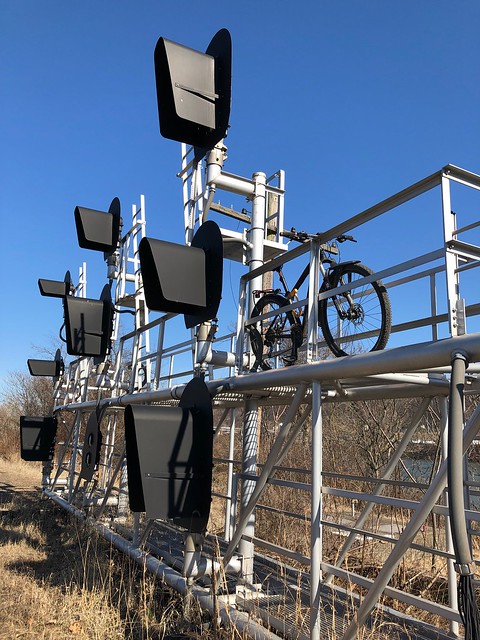 (Along RR by Allegheny west of 62nd Street Bridge by Sharpsburg) 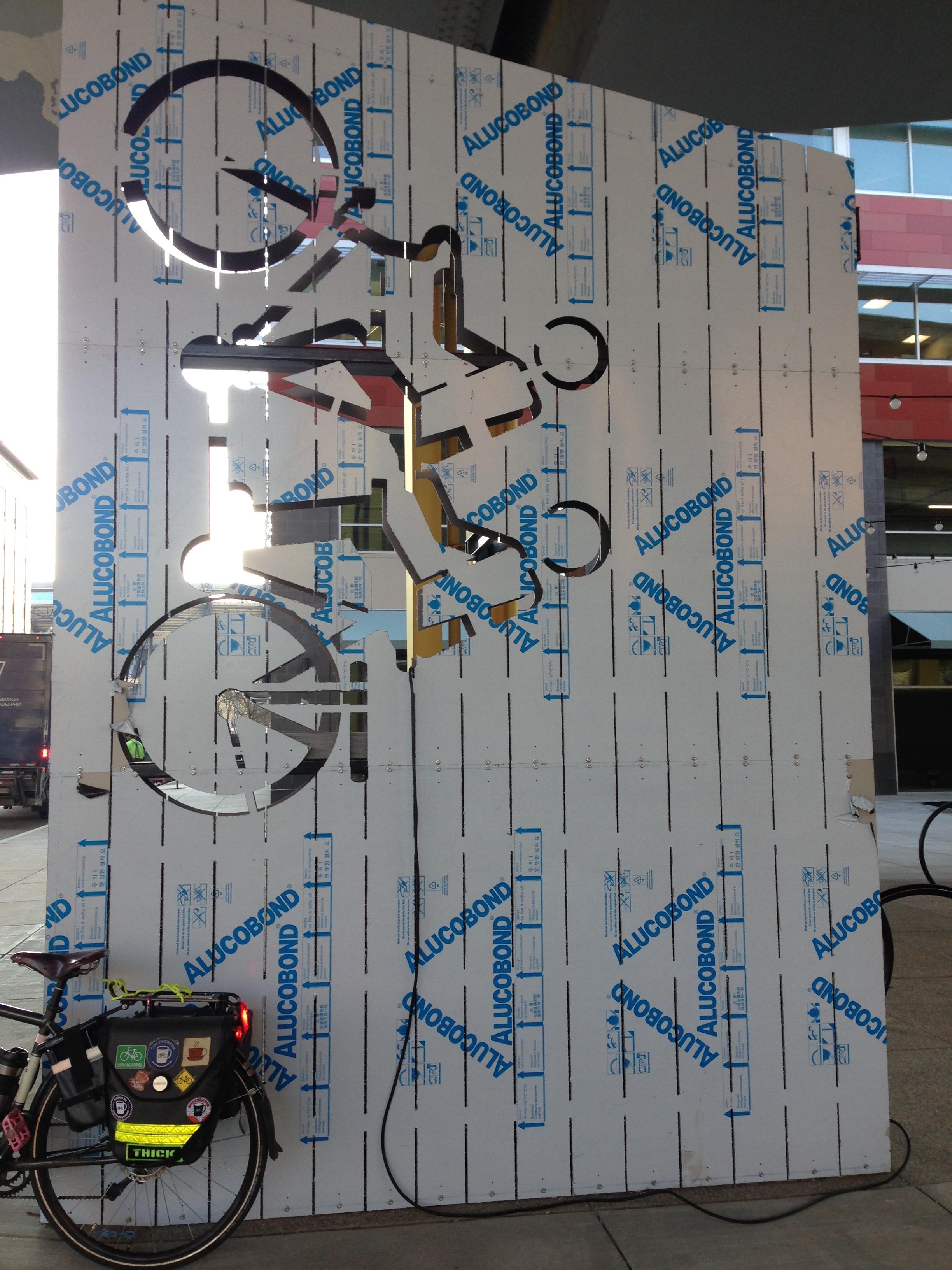 If you need a hint, it’s over in Stadium Land.

Go for it. Keep the game moving.

Zoom in left side. Big hint. I’d snag it but I’m in Cleveland for Passover.

I’ve beeb brumating and see all thus hubub.. so I see Trump-era-lack-of-rule-of-lawhas come to this forum…
I stayed here for פסח…though next year in ירושלים.. ..had my four cups of wine… for you whiners…

And here we go again:

North Shore at the end of the Ft. Duquesne Bridge. 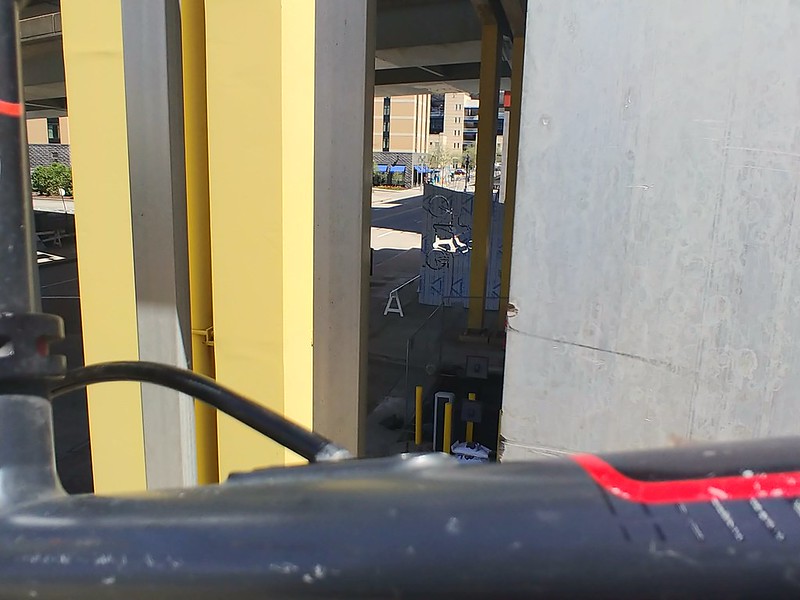 In case the rules have changed, here is a cliser rendition; 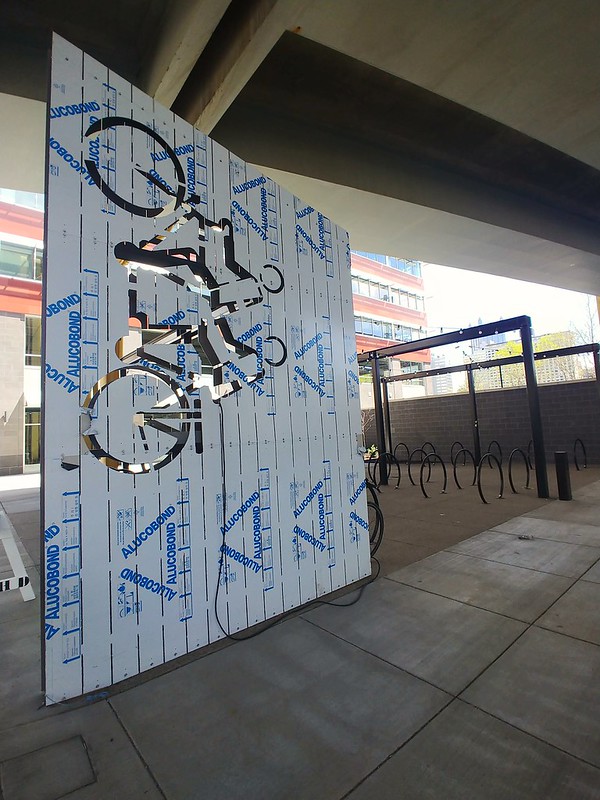 This bike station has a DERO fixit station with what appears to be a new, more ruggedly constructed pump handle and there is a power station with electrical outlets and USB hookups: 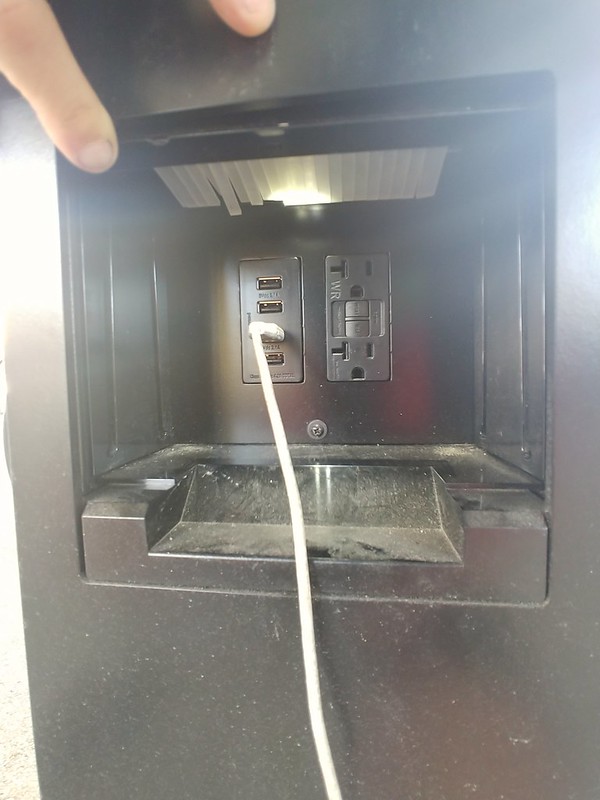 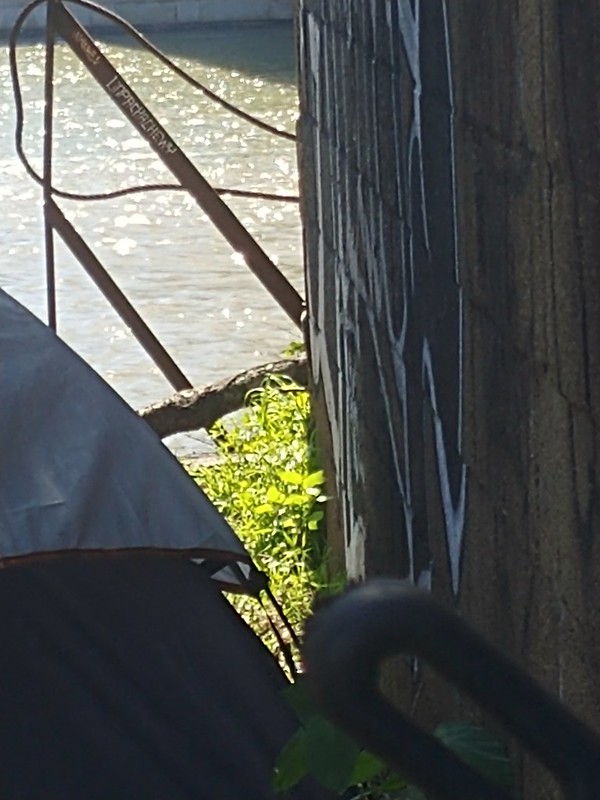 Did you drink manischewitz Concord grape for your 4 glasses or better stuff? 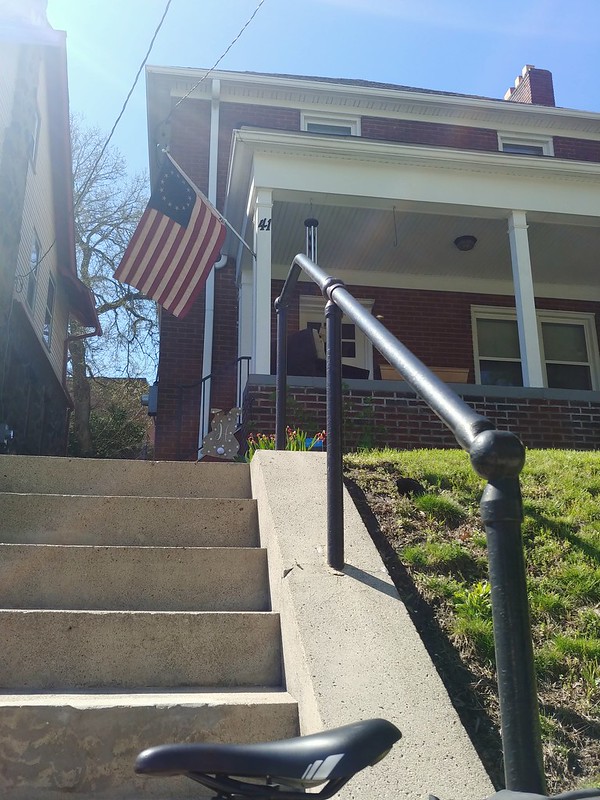