My bad…I meant to write the tag location as Forbes and Gist.<!–more–>

Today I begin my third century. As I sit here, as is my way, celebrating and sipping a free nitro cold brew, I reminisce of the big one that got away; of his father who tried to sacrifice his brother, but he survived; a challenge to my scruples. But I digress. I tag this confluence that also includes pygmies and a perfect number squared.</p> 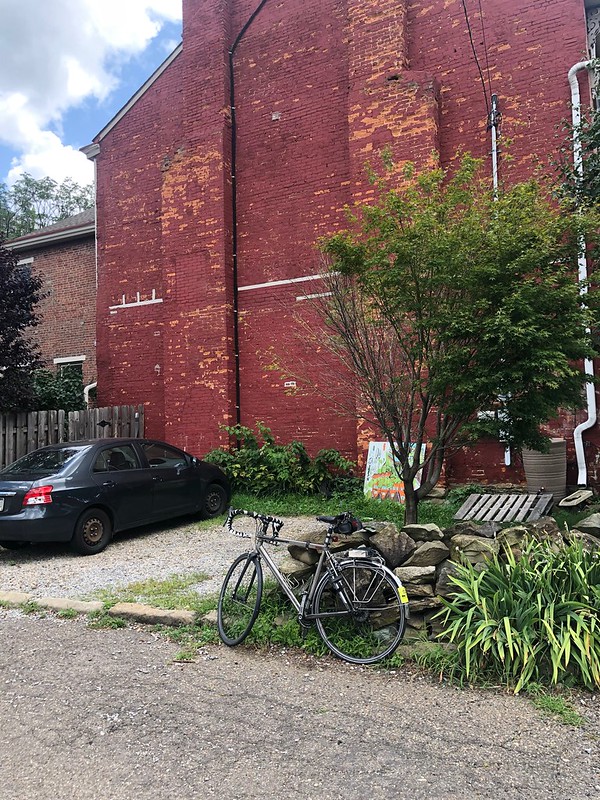 A pearl of wisdom for those who ken

So write this down with your penn

This angel honors those who fell 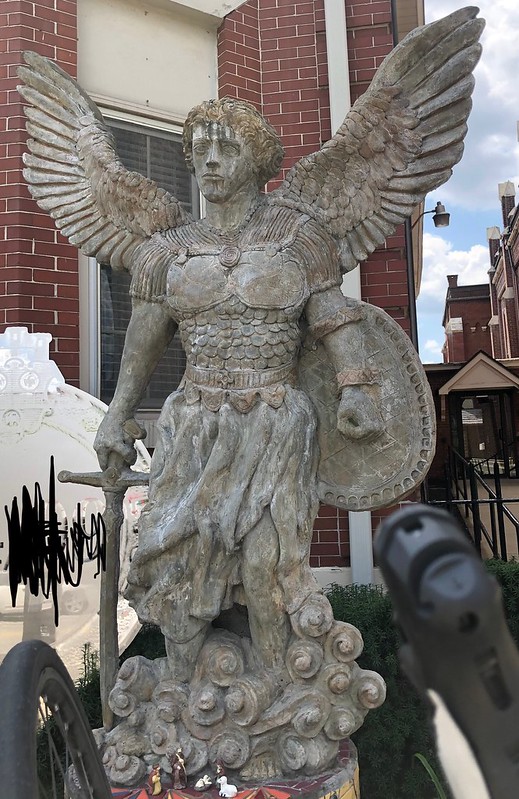 Methinks this hint is in error.

As not so much my quill doth flourish.

As Saint Patrick has a hankering preference for this or death.

Between these precious stones of oyster and January..

Begone upon thy fair steed to claim thine prize….

And honor those with Michael.

Anon shall I snag said tag.

Unless perchance The Bruce prevails.

The gauntlet thrown for Challenge…
And no takers…nay, Eric the Rusty Red, Saul of Tarsus–the Heckler, the Glory of the House of Stewart Clan, et alia…decline in shame..nary a peep…outdone by a scaly armoured rascallion with nary a s.word unsheathed.

Victory from The Webb.

4712 Liberty between Pearl and Garnet

Though the hint is straight forward and nearby beach-like terrain, don’t be fooled tabulating here…but:

To be sure, you can drive north…

NO way! We WiLL be chastized twice–to bicycle…and to remember.

That clue isn’t working for me. Another clue would be nice.

I was going to request that also. I do have another request though- after a long conversation with Iguana about his clues, I would like people to give their thought process to giving that clue after the tag is solved, and maybe even how the new person figured out the location.
For example, for my recent tag on Gist and Forbes, I felt the photo should have made it obvious as there was lots of background. If that was not enough, if you were traveling backwards on Forbes (one way street at that location, sentence was written backwards) and went past Gist to Miltenberger, you would have gone too far.

What a clue to return to. Can I ask what park of bike is showing in clue? But really: i just want more clues. :-)

Let me annotationally deconstruct the clue a bit…

Though the hint is straight FORWARD and nearby BEACH-like terrain, DON’T(!!!!) be fooled TABulating here…but:

To be sure, you can drive NORTH…

No need to read between the lines.

Was sure this was at the “Keeping Tabs” memorial (previously tagged a couple times), but I could not find that little word. Bummer.

Never mind the clue. I have no idea what I’m looking at or what I should place my bike next to.

Fwiw, and recognizing that I don’t really understand Yale’s little lizard brain, it seems possible he meant Forward and Beechwood, but not that one.

That said, a photo further back, or another clue, would be nice.

I’m puzzled. I spent an hour or so riding to both of the Forward and Beechwood intersections and couldn’t find anything like that color or that distinctive word. Please post more info @yale.

I assume there’s some relationship between the capital letters and streets or place names but I can’t figure it out.

It appears you were fooled, though he hint clearly warns…DON’T(!!!!) be fooled… …and a couple more deconstructions I forgot to include…

To be SURE, you can DRIVE NORTH…

No need to read between the lines.

Fwiw I’m now thinking something with North Shore Drive. That seems like it fits with some of the words and the reference to beach-like terrain. And there a MEMorial Park (and a WW II MEMorial) that might be worth looking at.

I won’t have time for this today, so go for it.

Could be up on North Charles St, too.

But I still have no idea what I’m looking at. That one sign near Becks Run Rd was the size of a playing card. This thing could be that small, too, I fear. 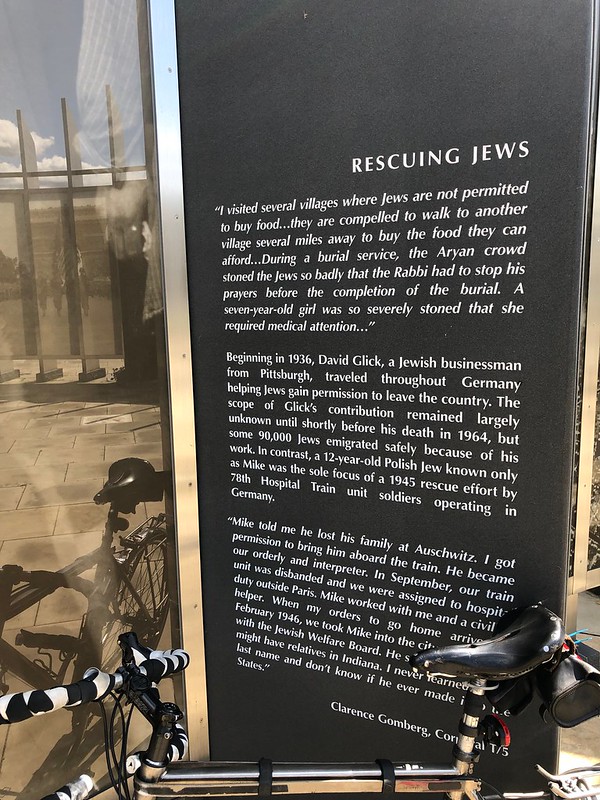 As to how I got there, @dave: I knew from the font that it had to be a sign, and no one puts that word casually on a sign. So it had to be in reference to something important, like a historical event, or a synagogue or something like a Jewish support organization.
After making the mistake of taking @iguana’s clue too literally and looking in Squirrel Hill I reexamined it and found the connection to the north shore, which of course has memorials, including the WW II memorial. This matched the clue’s capitalized letters, and confirmed that was the place to go.
Ideally, when I’m figuring out where to pick up a tag, I want to have an idea from the photo, and confirmation in the clue. I was pretty confident I’d found the right place before I set out this morning.

So find it now, in this season. 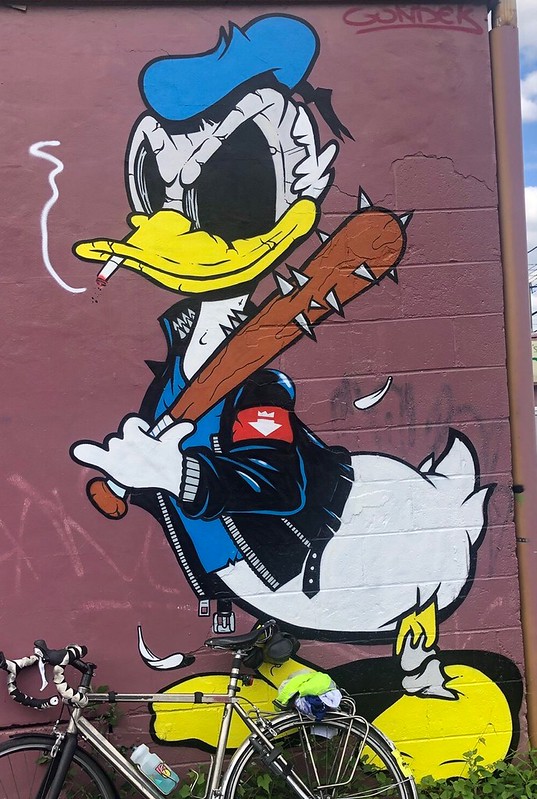 BTW, weird but true: I ran into Yale Cohen three times in Pedal Pittsburgh. Different locations. Perhaps explaining why he picks up tags so quickly and also the multiple identities here: there is more than one. 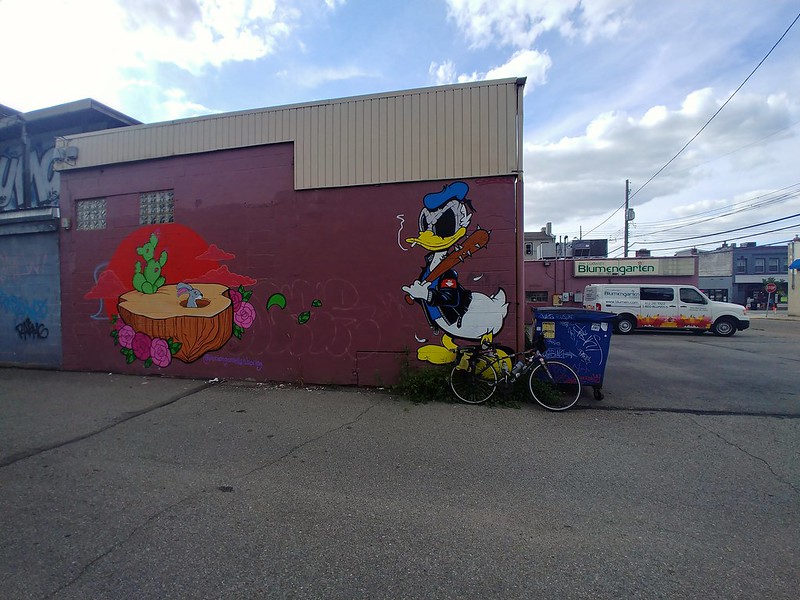 I recognized Blumengarten in the photo. And funny thing…my stalking of @jonawebb didn’t help…

The MB is really getting ratty. I posted the new tag on th 25th or 26th… Let’s try again.
Nee Tag: 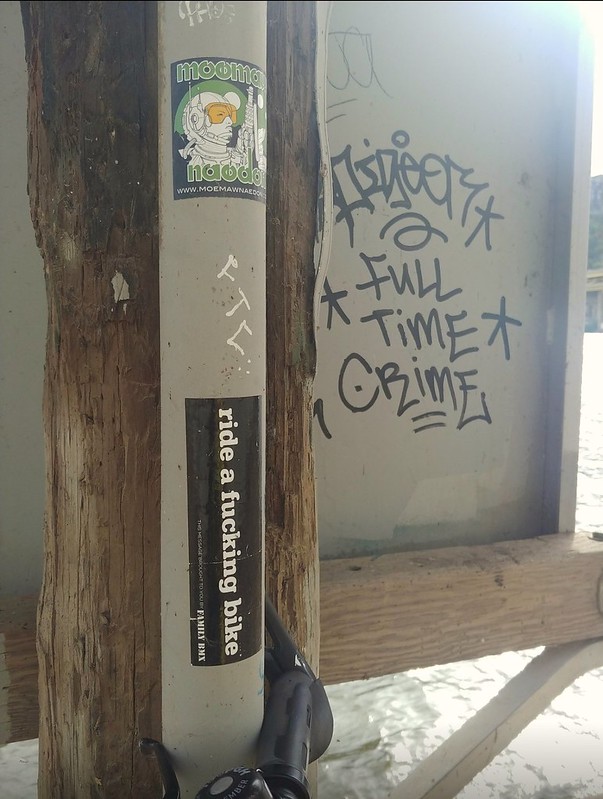 Hint: Just do it… And don’t worry it’s just a common Klingon.

I was asked for hint clarification:

Ride your f…ing bike to the comMON Klingon in the gap …in the gap.

Mon wharf near the ramp up to the path to the Point. 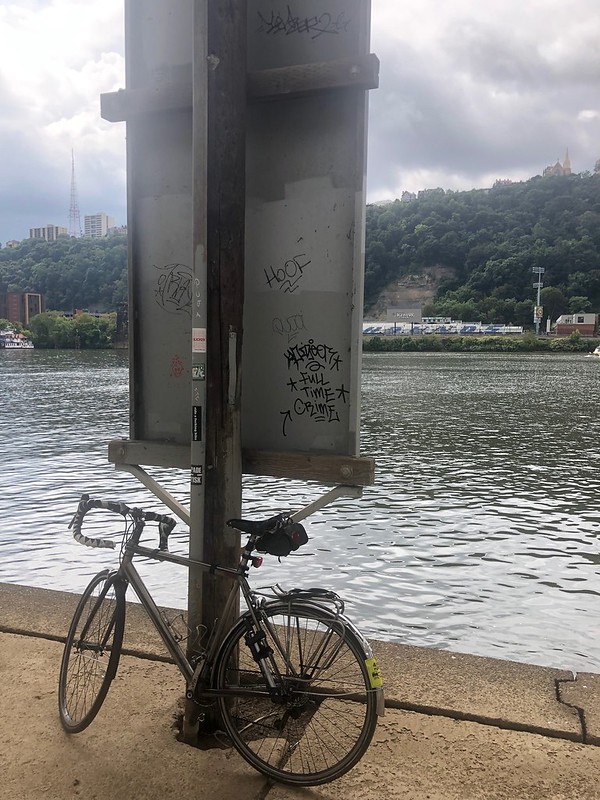 …and it is literally in the gap in the GAP.

Hard, fast, and true
Says this sign on the trail
Yet trueness will fly
From your wheels
On the cobbles nearby 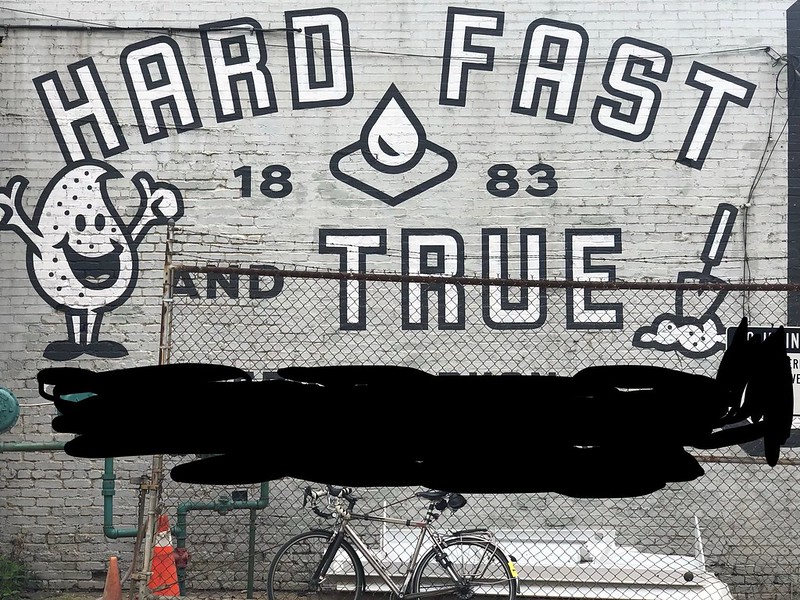 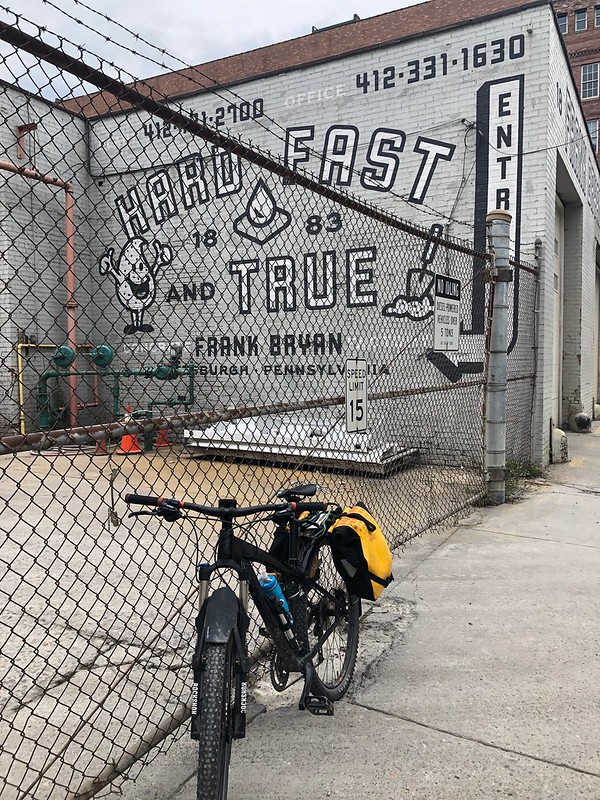 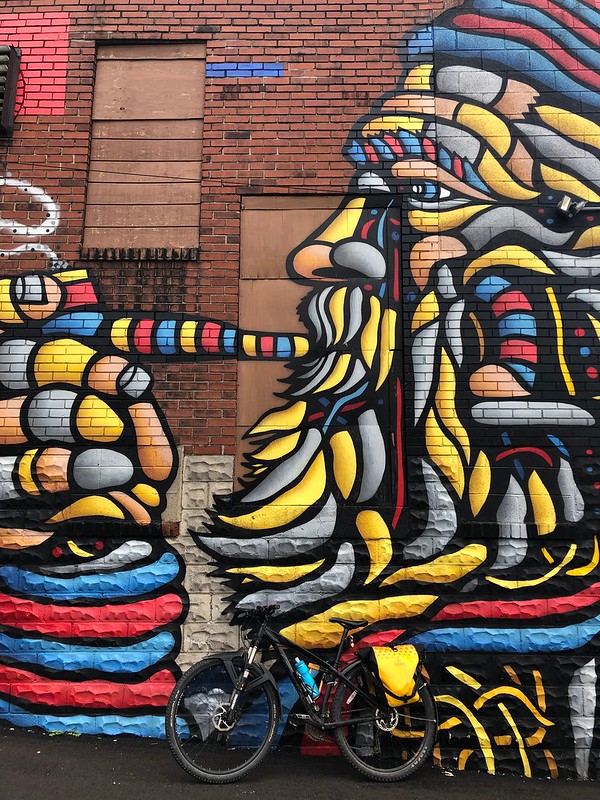 hint: by the same artist, but not in Pittsburgh: 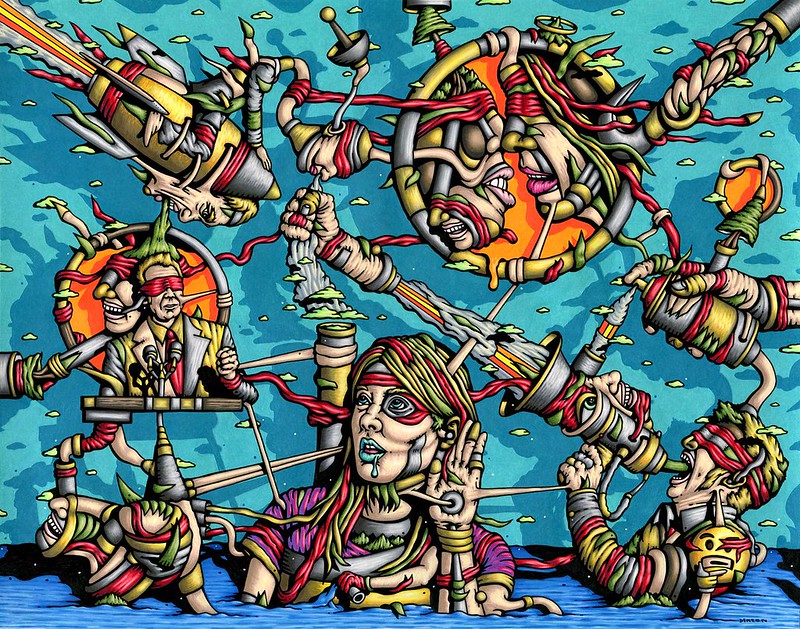 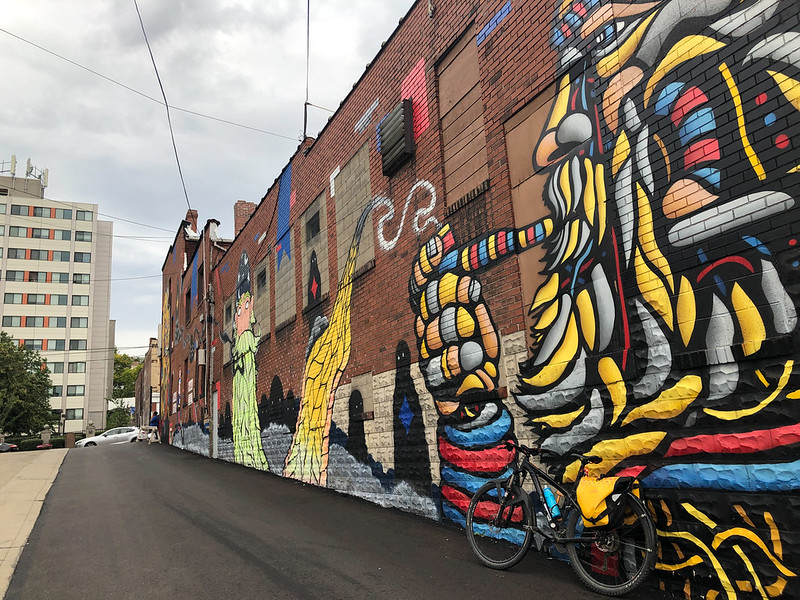 hint: not in StreetView

One could pick up this tag on the Every Neighborhood Ride this weekend, without even having to go past the second rest stop. Plenty of other items of interest and murals up there for a new tag, as well, although one mural was tagged a few years ago.

Is another hint needed? That first hint should have sufficed.

…<no hint>
…by the same artist, but not in Pittsburgh
…W avenue
… not in Streetview
…<Jake’s input which I think may give it away…but it’s hard to check since it’s “not in Streetview”>
…That first hint should have sufficed.

So “by the same artist, but not in Pittsburgh” is the dead giveaway… or is the <no hint> the first…and sufficient?
…
And I got my tail yanked for this?

I shared the “by the same artist” picture because it is a hint. Look closely.

I gotta admit, I’m stumped. I’ve ridden around, I’ve driven around, I’ve followed the All-Hoods route sheet on StreetView. Granted, the mural might not be on SV, but there can’t be too many 10-story apartment buildings on a hill in the city. I’m sure I must have been past this 50 times, but I can’t place it from memory, and the clues aren’t helping. “W Ave” might be Western Ave, but that part of the North Side is dead level. Something farther uphill, north, near Mattress Factory, has plenty of art (think Randyland) but no tall apartments.

We’ve had a fantastic run of nice weather here the past two months, but seems the only tags I’ve chased after have been in drenching rainstorms back in April.

Gentlemen, we’re making this game too hard. The tag I set was picked up in hours, like it should be. If the photo isn’t self-explanatory, make the clue just helpful enough that you get in the area and with a minimum of riding around looking, you’ll see it. Like my hopscotch clue, my 10-foot @ sign, or the Diamond Bank.

@stuinmccandless try doing a reverse image search on the other art piece this will lead you to the artist, That is how I found it.  I haven’t felt like climbing up the hills to grab the tag when I don’t have anything in mind as a new tag.  While passing by don’t let the onions make you cry too much.