If you can find a place
Tomorrow, you might race Landmarks in this image should give it away.

I’m not even sure this is the same spot as I can’t find the right angle or gravestones. The bldg looks close, so does the tall monument at left. Going to keep looking. …and get your bike in the picture!

Ah, this is it. Union Dale Cemetery, but on the west side of Brighton Rd. The previous image was on the SE corner of Brighton & Marshall. I also looked in the cemetery on the NE corner. Awesome find Stu! We were hoping the bridge would be clue enough.

Way back in Tag 36, almost three years ago, I picked up my first tag in this game, the anchor in Allegheny Center. But it’s time to drop anchor again! When you find it, you might say “That’s It! ____ _____!”, and in so doing, earn some high marks. Anchors near the Ingot Mold thingy at Station Square. This looks round on the sides and high in the middle, yes?

The park is quite small
just a bench and a space
barely enough room
to wait for your place.

Near a pair of circles,
but one is a square.
Both are confusing;
one will leave you impaired. 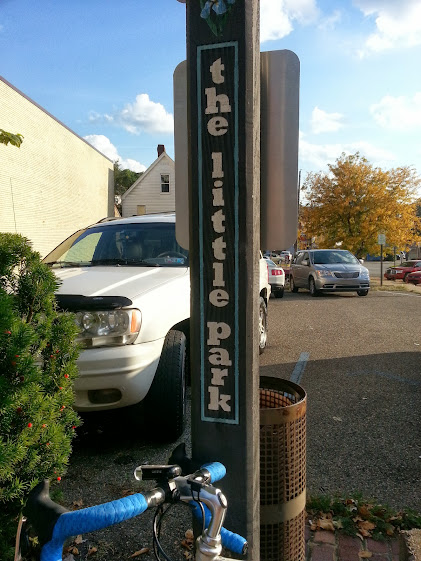 Look at the box, towards the west.
The tag is next to the very best
neighborhood Italian place
very close to my home base.

Ah yes, I went right past there a few weeks ago. It’s going to be the weekend before I can have a shot at getting out thataway.

Stoltz and Crafton, next to Sarafino’s @steven – I’m not sure how long it’s been since you changed the Tag-O-Rama spreadsheet, but ha!, I like the new categories. I couldn’t find a translation for the Russian word though.

Bah, no upload button, either. Gonnahafta fiddle with editing the post. After an hour of riding around riverfronts! And bruced, at that!

Ok, here, next to Highmark stadium, just yards from where I dropped anchor ^H^H^H^H^H^Ha tag Yeah, I rode past that anchor this morning.
That sea of orange cones really struck me. They were having a BMW driving demonstration. I’ll bet I could outdo any of the cars in terms of precise handling.
I couldn’t Google to translate it, but I’m pretty sure that Russian word means “awesome”.

Oh, this is maddening. Definitely the right site, just not the right spot.
Where is that fence?! Six months ago, the space on the right looked like the space on the left. But with a lot of volunteer labor and $1,500 of tax money, it’s been cleared out, cleaned up, and seeded with flowers and native plants. TeamDecaf wrote:I couldn’t find a translation for the Russian word though.
the russian alphabet”– 64 –

Transliteration would be “Stahanovtsy”. This is based on last name “Stahanov” who was in charge of coal-miner brigade that produced enormous amount of coal per each day (as usual rigged) and it became an word of its own meaning that you have to work really-really hard to earn this nick-name.

I didn’t add the two new categories. I didn’t even notice them till you pointed it out, though they appeared back on September 23 (courtesy of “anonymous”, says Google).

I coded the “most tags” and “found by groups” logic (and did most of the data entry). Other folks have added the chart and the list of categories (original and improved).

For a second I thought that upper pic was snow, and I wondered, where the eff did Stu find snow?! Set with the weekend hills group including Buffalo Buffalo.

Hmm, who could that be? It would have to be someone who was familiar with Russian idioms… can’t think of anyone… This veteran cyclist has a bird’s eye view. This tag (no pun intended) is just a hop, skrip and a jump away. Hmm, who could that be? It would have to be someone who was familiar with Russian idioms… can’t think of anyone…

Wasn’t me for sure.

Boy, that’s a lot of curiosity. Fortunately, no dead cats as yet.

Way back, in the mists of time, I added the histogram chart to the Tag-o-Rama spreadsheet, mostly because I was curious about the player distribution. It became apparent that people stratified in terms of their focus on the game. So I added the range labels; they were not meant to be too serious, after all it was a light-hearted, fun game with a top score of ~16, I think.

I visited the spreadsheet more recently and (among other things) realized that the scores had really shot up. Calling the top tier Stakhanovites seemed about right: Heroes we seek to emulate. Sorry stu had to use a diffrent phone to upload this pic,
This place is no longer in use but people still show up in their underwear.