Looks just like another one, but this one has a church steeple.
Stairs across RR tracks at 15th St & Breed St, Southside 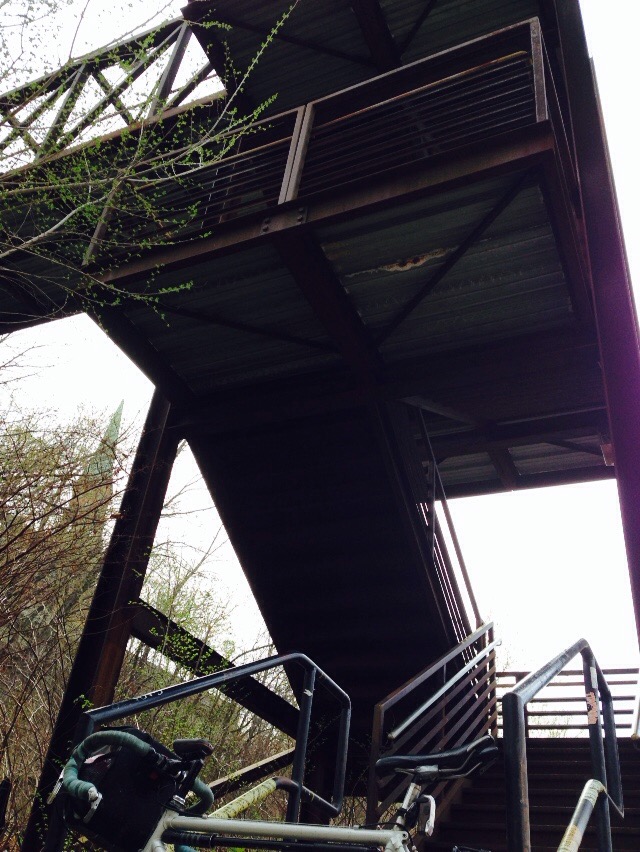 NEW TAG. hint: Aurelan was one

bike near top of stairs 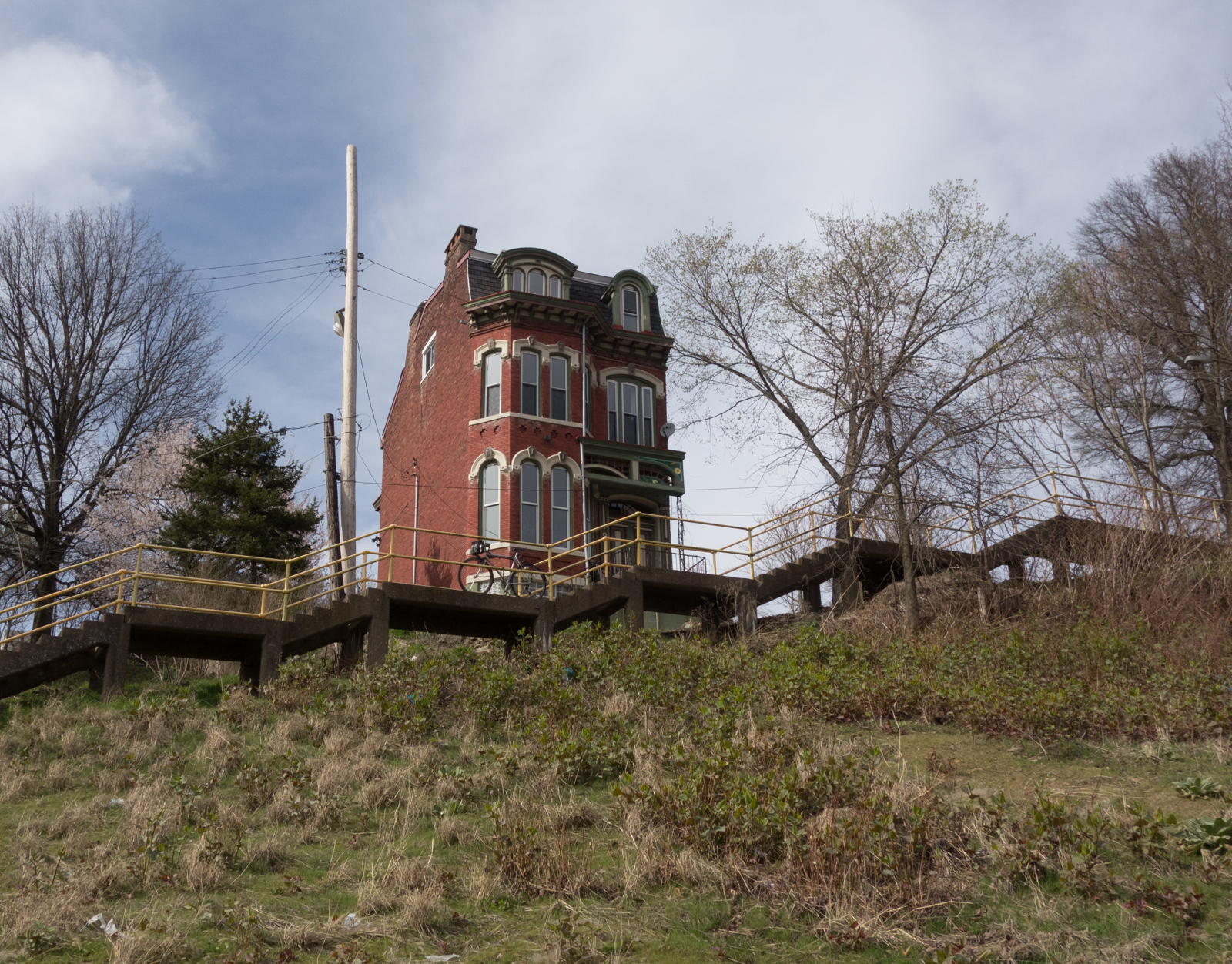 bike near bottom of stairs 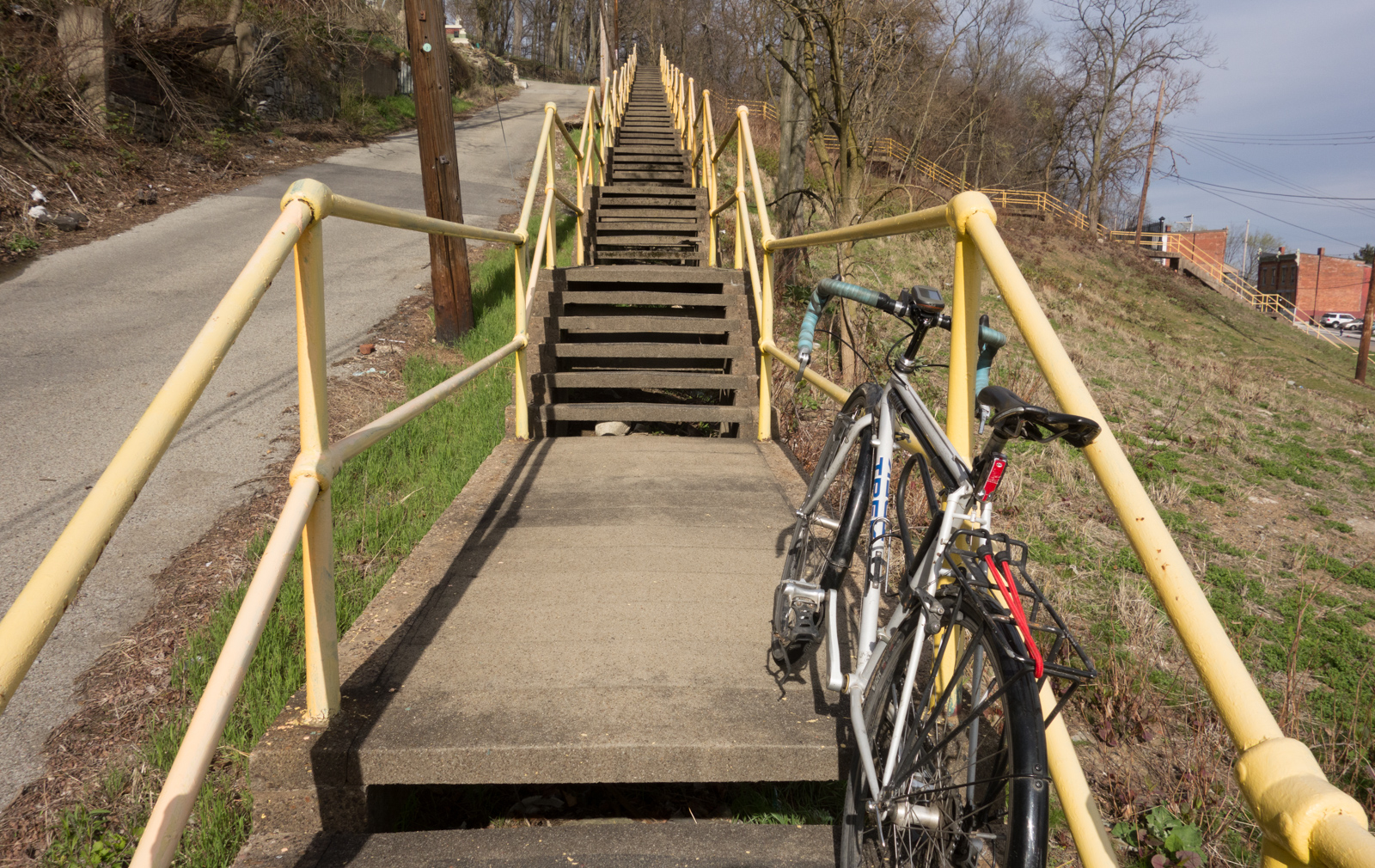 I have no idea where but wow I want that house.

hint: 2 blocks from the RR tracks

Someone get this. I want to go there and slap their heads because of that satellite dish. WTFittyF?

I know where this is. I should be able to get there tomorrow. 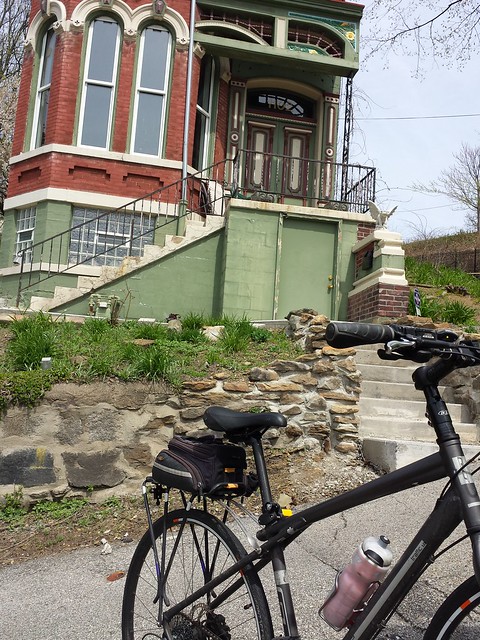 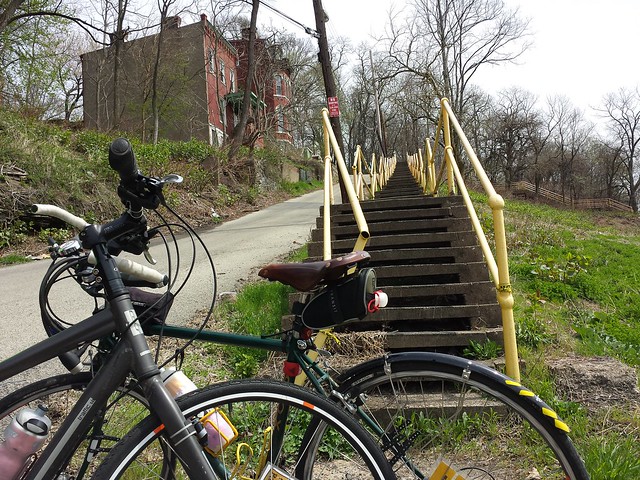 I don’t get the clue. The only match I could find for “Aurelan” was James T. Kirk’s sister-in-law. But that led nowhere. 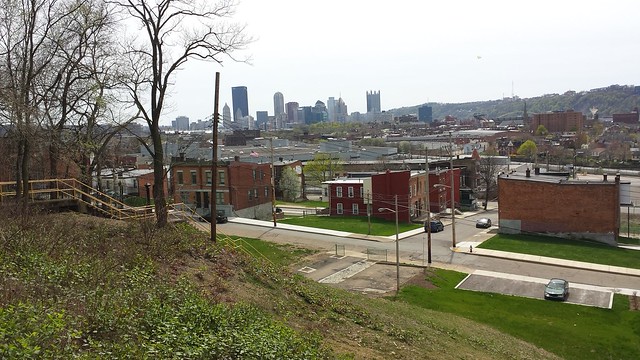 View from the steps. About 75% down from the top. 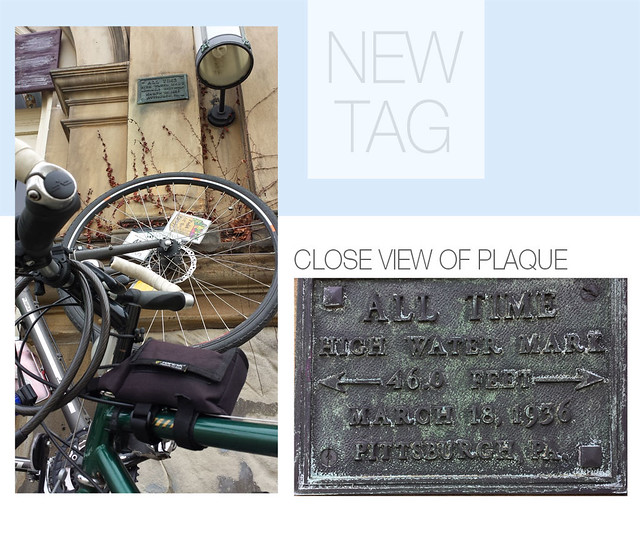 Not sure if this needs a clue [thinking].

Aurelan was a Kirk bride

I looked at the same Wikipedia page as Jon, didn’t make the connection.

OK, life goes on. Now I’m going to have to ride all over Pittsburgh to figure out which of the dozen such plaques commemorating the 1936 flood matches the tag. Oh poor dear me, tsk tsk.

NOT A FIND:
I thought it would be in the vicinity of this marker, but after scouring the area, I did not achieve the proverbial cigar.

I was feeling confident that RustyRed would pick up this tag – it’s in her Bohemian area.

The New Bohemian, across the 16th St Br. 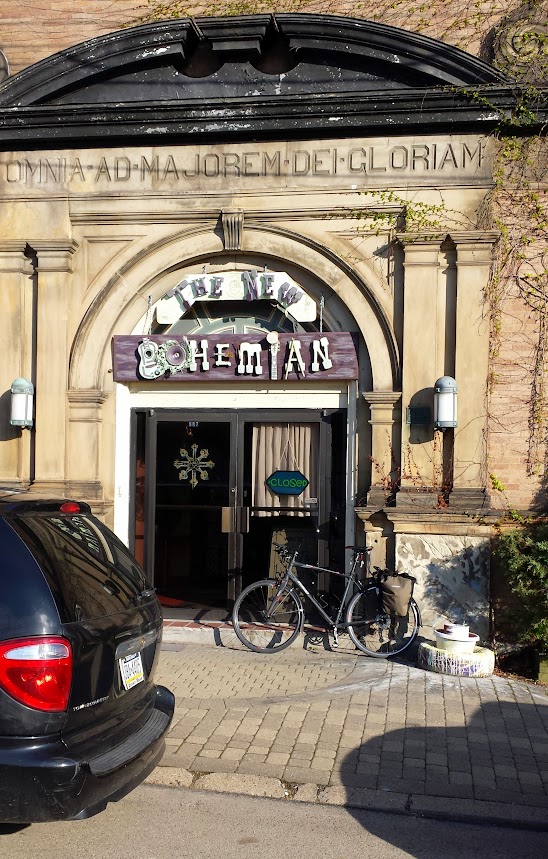 loc: 40.452822, -79.993063 (tag plaque shadowed by right lamp).
hip yet interesting
A former Czech church (hence the name); “art gallery that doubles as a tattoo parlor and triples as a wedding venue”, according to a review.

I’ve been there a few times for dancing; do check it out: https://www.facebook.com/steel.city.squares
Bike parking in the vestibule.

That building was also tag 76. Back then (December 2010) it was a daycare center.

Well, isn’t this Just Ducky! Not only does Pittsburgh have a Duck Hollow, it also has a Duck Junction. Rubber Duck? I don’t think so. 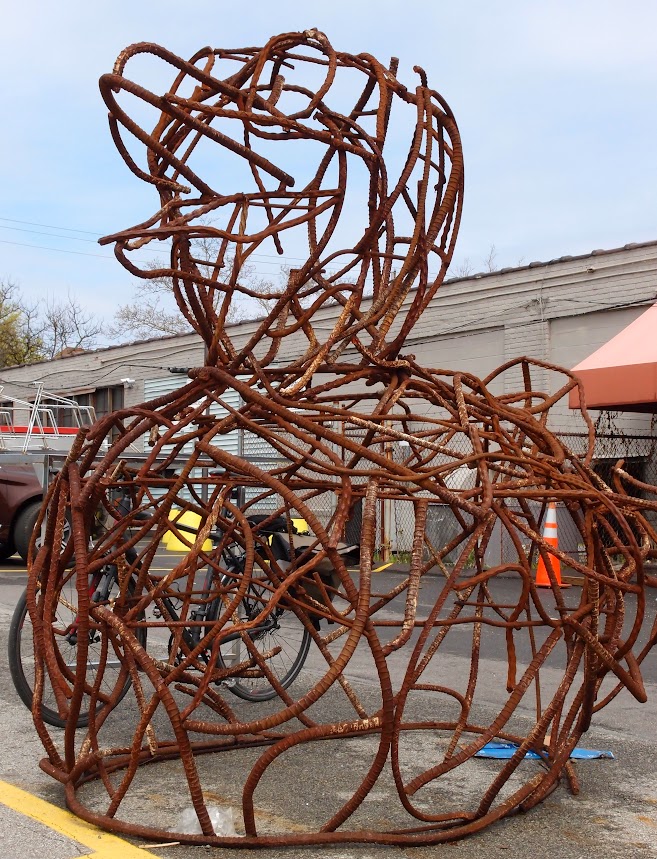 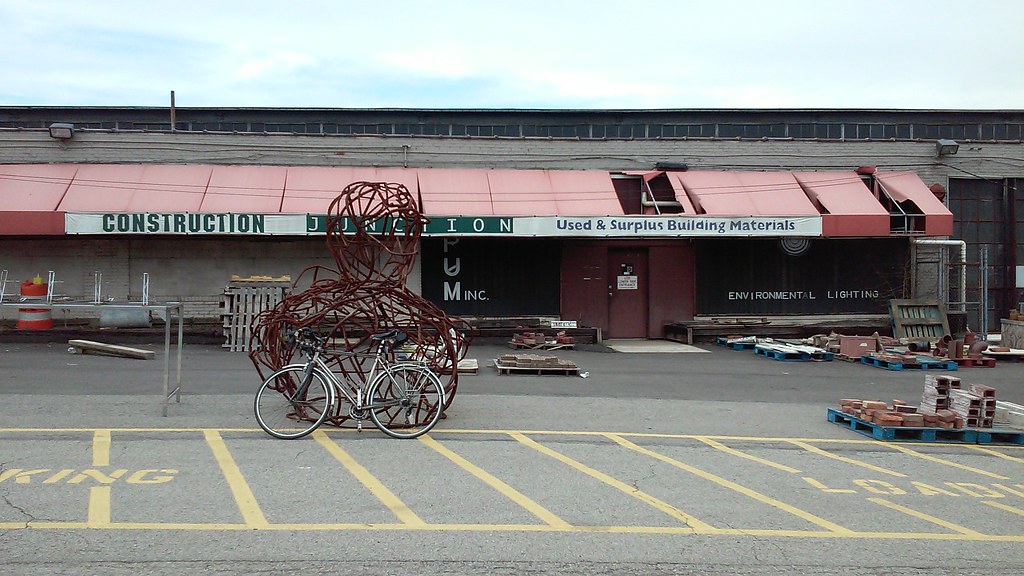 Steel Duck, please.
Anyone know what that’s about?
I like it. 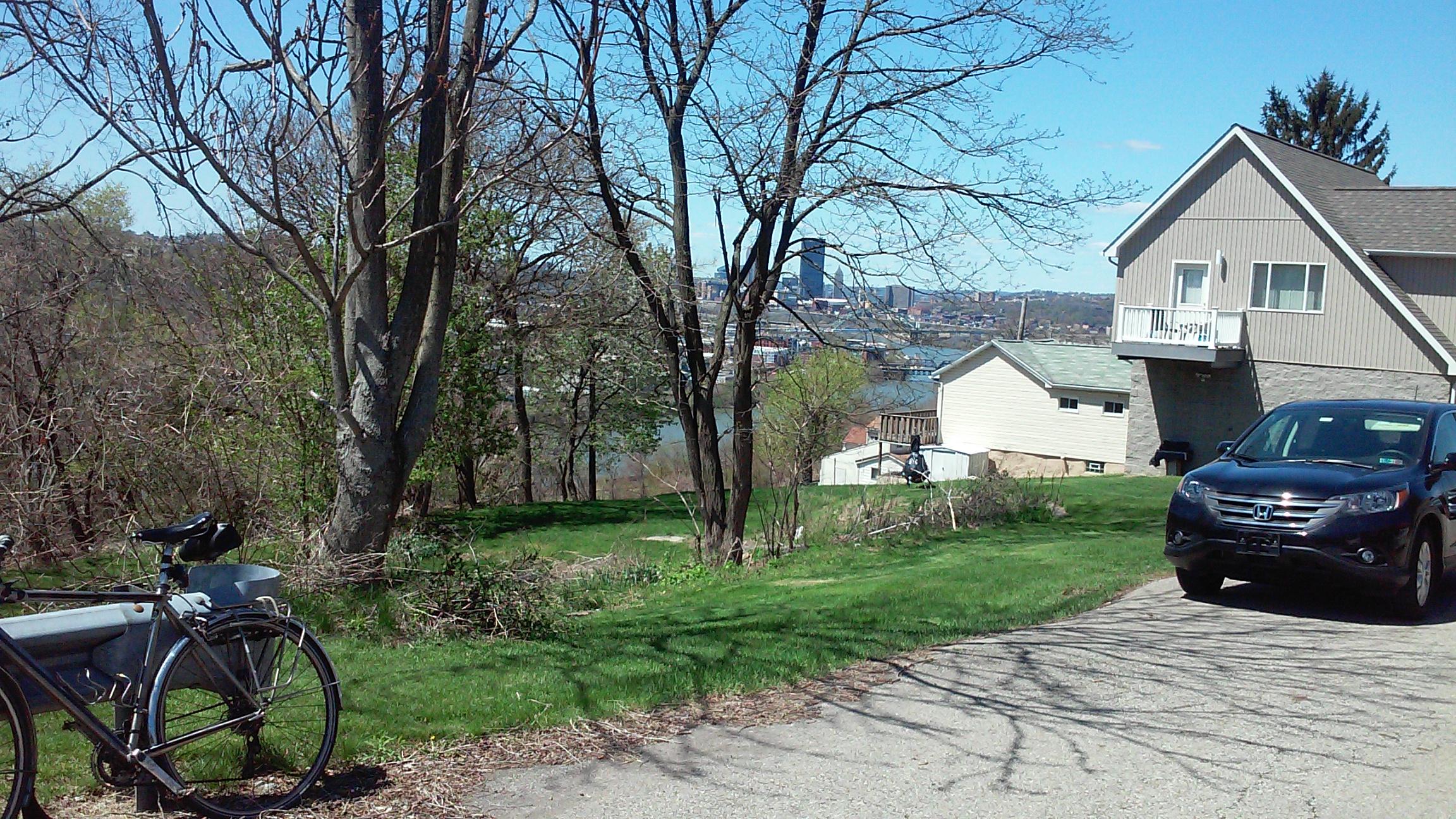 Ah, a great stretch for vistas.

Of course StreetView drove by in the summer, so it’s not that obvious if you look for this on the innernets. Wouldn’t it be cool if Google made a point of consciously sampling data in both winter and summer?
One of the things I really like about Pittsburgh is how different things appear with and without foliage, how they transition from one to the other and back (no, really). And how you’ll remember what’s behind that wall of green when you roll by it in the summer. Cycling speeds make you notice that much more (that driving).
Anyway, I won’t really be able to get to this until next week-end, unless today’s weather just keeps on and on, and forces me to ride (like it did today).

But since, at bottom, Tag-o-Rama has a competitive sub-text…

(Different spot; getting from one to the other is not totally obvious if you’re just tooling around.) [20141228]

I know where Jon’s tag is. Too bad I’m in British Columbia this week…

@pearmask and Noah rode CtC, but too bad Noah ended up in the E.R., or they might be willing to head up this way. Or maybe Noah is feeling better now?

Jerusalem Delivered (Italian: La Gerusalemme liberata) is an epic poem by the Italian poet Torquato Tasso first published in 1581, which tells a largely mythified version of the First Crusade. […] The poem was immensely successful throughout Europe and over the next two centuries various sections were frequently adapted as individual storylines for madrigals, operas, plays, ballets and masquerades; scenes from the poem were also depicted in paintings and frescoes.

If you can there’s a nice little climb waiting for you. (Well, two of them depending on taste.)

Lest I forget… Y’all are invited to ride with the Tag-O-Rama team in the NBC!
Click the Join button on this page:
https://nationalbikechallenge.org/team/5345

No special reason to join this particular team, except liking to ride. Or as Eddy Merckx put it: Ride as much or as little, or as long or as short as you feel. But ride.

If you look closely at the photo you should see a bridge handrail at the top. I would suggest picking this up today; that marathon race is tomorrow and its route is right next to this spot. I’m pretty sure they won’t let you bike that race. 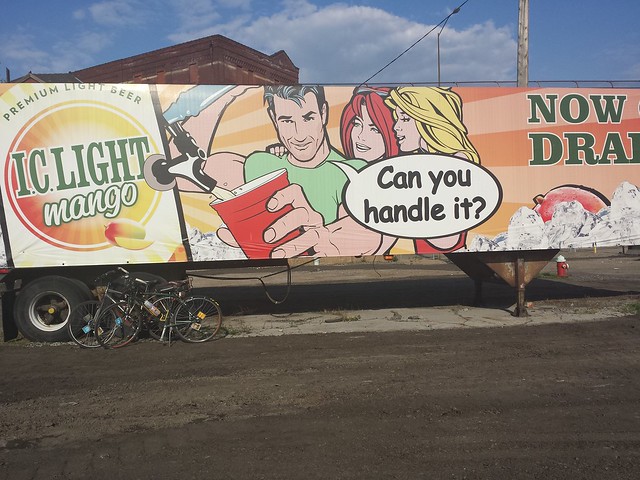 Can we get a zoomable version of that new tag photo?

Colorful, this little library, in a place that’s absent of all color.

No particular clue springs to mind. So, hey, take a look.

If you head out 30 a good ways, you might find a town by that name.

Ligonier Street by the far end of Spring Way.

Family things happened today (daughter just got home from college), so I didn’t get far from home. I promise I will have a photo posted Sunday morning. Sorry for the delay.

As burls go, this is a fairly large one. To take your own photo of this, you should have a view of a river but don't. pic.twitter.com/VH6Do1Cx1C

As burls go, this is a fairly large one. To take your own photo of this, you should have a view of a river but don’t.

Just in case the tag photo does not show up through the tweet, here it is again: 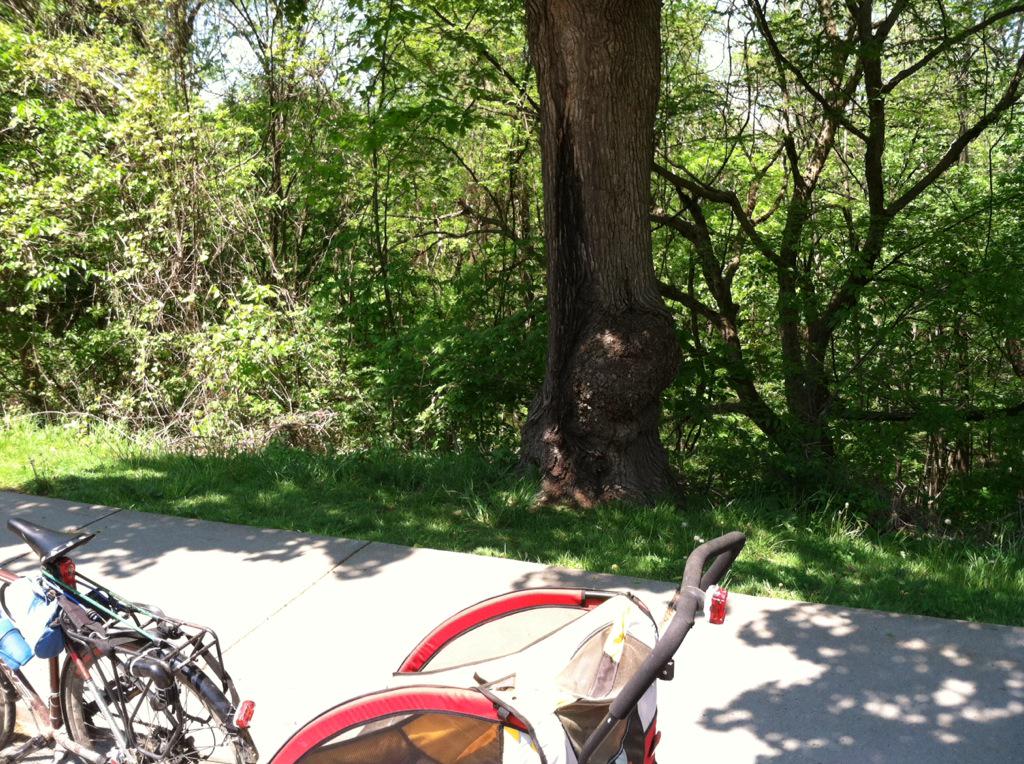 I will add that this is out in plain sight, along a well traveled street, which I have seen many group rides go past. Just barely out of frame is a bus stop sign.