If you ride the paved river trails, you should be able to see this.

Southside Riverfront Park opposite where Will Smith sat in Concussion (see a previous tag) and collinear with the previous tag beim der Hoffbrauhaus. 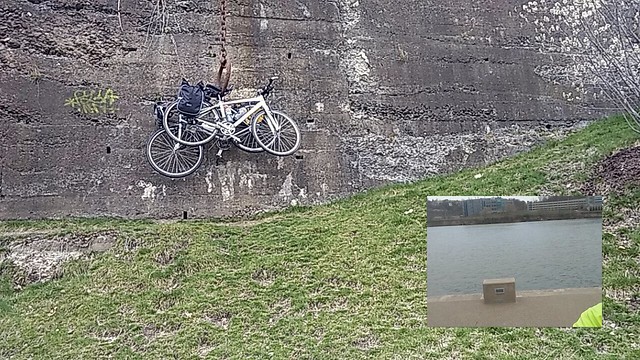 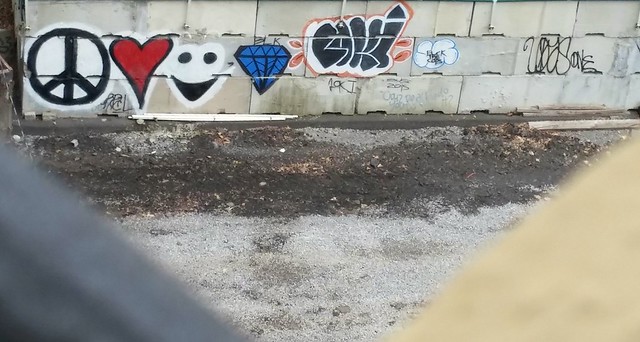 As the previous hint required riding where not permitted, the current tag view is in The Rectangle, but on a boundary parked above the trees. To your left bats used fly, but now, to your right it becomes buggy in the Spring. Supermans legacies are planted all around–check it out. More could be said in line with the previous tags, but we can cross that bridge if so flagged.

It’s not that hard; it’s underfoot. Go ogle the young girl and sea captain drive by, along the oxidized crossing back in ’97. Daddy don’t be a Cro Magnon–but close.

Ah, an @IguaTag, along with its intricately constructed clue(s). Whose construction, despite my gentle needlings, I do appreciate.

I almost think know where this is. But we’ll see tomorrow. Or not; it’s a long day. And there’s always others lurking about… hungry for a tag.

———
But while I’m passing through: Is all this peace/love//happiness vandalism traceable to that mini-donut shop on the Strip and their, perhaps ill-conceived, attempts to advertise their (frankly greasy) offerings? There’s an awful lot of it around town.

Or is this just another meme that I somehow never managed to notice? Are there other permutations, each with their own possibly meaningful signification(s)? Love/Happiness/Peace seems like a plausible progression. Anyway.

Maintenance building at CMU, above Boundary and next to the Panther Hollow Br. Fun fact: its Google address is “1 Boundary”. At last we know.

The clues made this pretty straightforward (though the apparent scale of the tag photo did make things a bit less obvious).

And note that this pic is doubly trespassive, appropriating property from both CMU and the railway in one shot.

As implied in the first clue, there was no trespassing required for this tag. I always take the high road. I respectfully submit: try again.
…and to give it away–be warned if you go today–as suggested in one hint : beware of the bugs–they are swarming.

Are you saying that’s not the right location? Because it sure looks like it, to me.

I saw yours and raised you two…

It depends how one understands the rules. That location is in my tag, but I and my bike were not there; it was from a much different vantage…and maybe??? the image was too ambiguous…on a higher plane.

But tags are images. And the images always feature a scene, not the pic-taker’s location (in a literal x/y/z sense). Do peruse our collection of pickups; I somehow doubt that pickups are taken from the exact spot where the tagger stood.

Why? Because it is customary to change perspective and provide the audience with some sense of context. And perhaps allow them to appreciate the setter’s clever (or not) staging of a tag.

You are however raising an interesting philosophical point. So let me briefly address it: I believe the essence of getting a tag has two aspects: discovering the location of the tag, and providing proof that you did. Both criteria are met by furnishing an image that features a recognizable likeness of the original object (and obtained chronologically later that the original).

But I’m probably overthinking this. Is the goal here simply to get someone buggered?

I think I’ll follow @TeamDecaf’s suggestion and just roll with it.

You should be able to correctly duplicate my act of tagging without provoking much conflict. To be safe, I suggest that you also follow @Iguana’s directions “To your left bats used fly, but now, to your right it becomes buggy in the Spring”. Well, more or less.

“In honor of Toosie” commemorative brick, Schenley Plaza under the tent 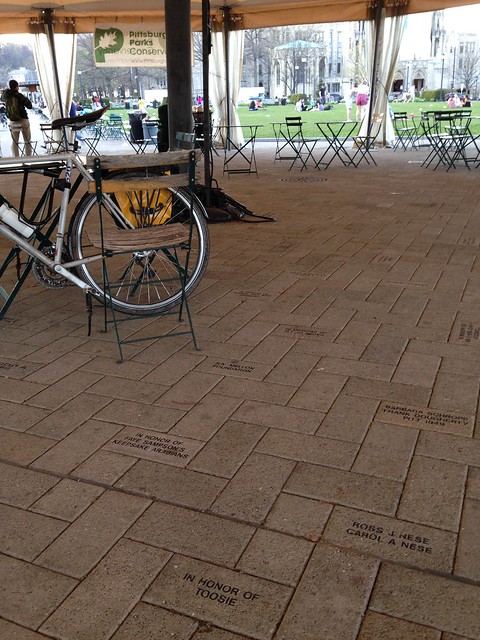 To tidy up and put all this behind us… @Iguana’s tag was shot from this place on the PHBr (I assume it’s that yellow smudge in his pic).

Apologies for not actually getting out there and snapping my own pic. I’m trying to move on.

But the @Iguana is challenging our comfortable assumptions about the world and how people tend to assign meaning, sometimes unkhinkingly. I can relate, but I’m trying to move on. So let me just point out that the conventional way to signal figure/ground relies on leveraging assumptions shared between artist and audience. The audience expects this sharing; if it’s not obvious then you should work harder to communicate your vision. It’s fun to violate assumptions, but do be careful out there… you may find yourself beyond the Pale.

God, I hate this twelve-step recovery and moving-on stuff… Anyway, I think I have, what, 2-3 steps done already?
So this is my next step:

It’s part of the clue. And it implies that the path to the tag should go past there. Why else would it come up? This is so confusing!

Wait, can I switch over to that Kübler-Ross thing?
It’s a lot shorter and I think I’d be done right about now…
Ok, screw it. That’s it. I’m switching.

Acceptance. At last.
Finally. I understand.

No more posts will follow.
Thank you for your indulgence.

At the risk of being called pedantic, lizard-brained, whiner, other-worldly: Schenley Bridge, constructed 1897, Henry Rust, engineer…no wild cats on that bridge…but we’ve moved on to PH Plaza…or at least @paulheckbert has…

Thank you for clarifying!

And confirming that the world does indeed support many overlapping, yet compatible, meanings. Each dependent on the observer, each valid.

BTW, when did the steam plant switch from coal to gas?
I somehow assumed you knew and had worked it into your narrative. Ah well. Overthinking, again. 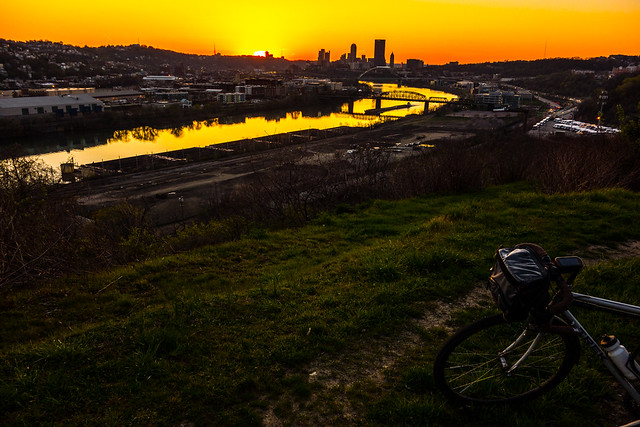 Oh, I know where this is…it’s the sun…is that in the rectangle…it must be HMB…or is it the Mon..or is it Eliza Trail area parking lots…I’d go fly a kite, but I’d rather cut down a tree to clear the view from this colorful area of mushrooms. 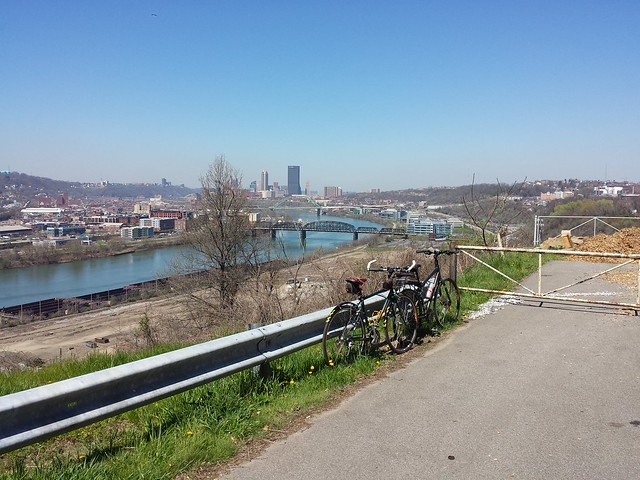 Yes! I think Forrester St is in Hazelwood, but right near the Greenfield border

Not much of a clue giver on the first pass, am I. ^ That’s it above, the glass block image says it all. With campV.

Regarding poems, an infamous one has a vague clue:
Pedicabo ego vos et irrumabo

“It’s about riding, not Googling.” Well, I’ve been Googling for 15 minutes, and now know a lot more about Latin poets and what you can say on the radio than I did, but I have no more idea where to ride than I did. Can we please get a bit more help here?

Ah, Stu, I sort of expected you to get this one already.

My Point is that you should probably think more about the British, not Latins.

That might be enough to cause me to ride a bit out of my way this morning. If it is where I think it might be, I don’t look at the place much, so don’t recognize architectural details. But enough whining, gotta get out and ride. 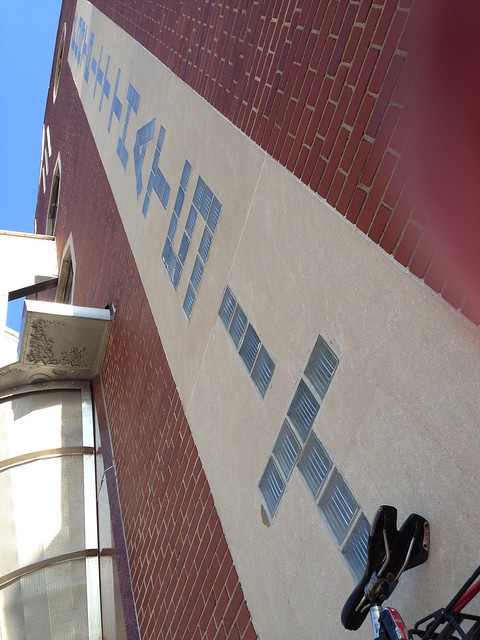 I never knew this existed. I thought it might be a T station, and rode around to three of them. 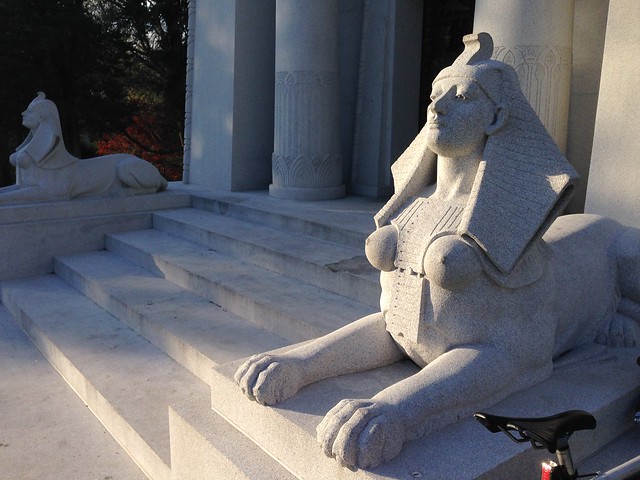 ok, for those of us otherwise occupied, can someone expand on the Catullus quote? (And its connection to the tag… some days I’m slow.)

Pedicabo ego vos et irrumabo is the first line, sometimes used as a title, of Carmen 16 in the collected poems of Gaius Valerius Catullus (ca. 84 BC – ca. 54 BC).

Ah, and I thought there might have been something interesting about that neighborhood that I didn’t know about. Say more Penn State than Pitt…

Ok, let’s move on. We have a new tag.
Hints? Or musings?
They clearly emerge.
Eye challenge: try me…
Hey rectangle: me lye.
No Latin needed: Ye legal erect hymen.

Beat me to it,

Looks like something clawed its way out out of there:

Well, that saves me a trip this morning. ;^P I guess I’ll stay in and watch Fleche Wallone…

… and of course a Vlaamse pijlkoker waiting for it.

Why is there no pepper?
They forgot the pepper.