On the edge of Riverview Park, Perrysville Ave.

I was so close I could smell the sassafras, but didn’t find the exact spot.

It must not be visible from along Sassafras St, as I’ve checked it from the old brewery all the way down to the ramp by 16th St. Well, the point of this game is to get out and ride, so that’s what I’m doing.

The pic was snapped late in the day…
Feel free to angle for more hints. Allow me to school you for a moment. Pittsburgh is filled with lots of vacant structures like this one which are owned by the city, or in this case by the Urban Redevelopment Authority. You can buy them and fix them up, probably a better deal than the new development in the background.

Uptown, on Colwell. Just off Dinwiddle. 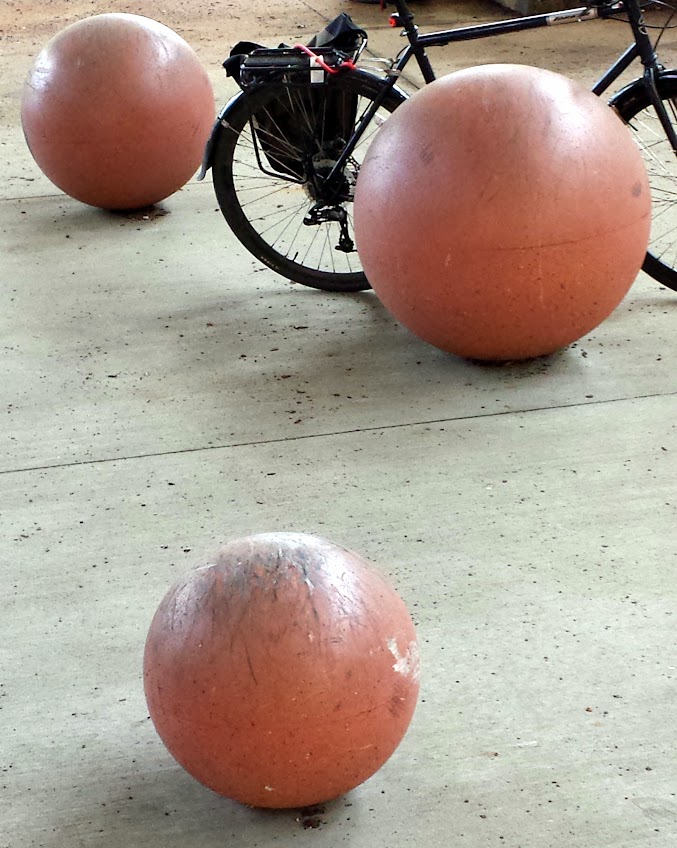 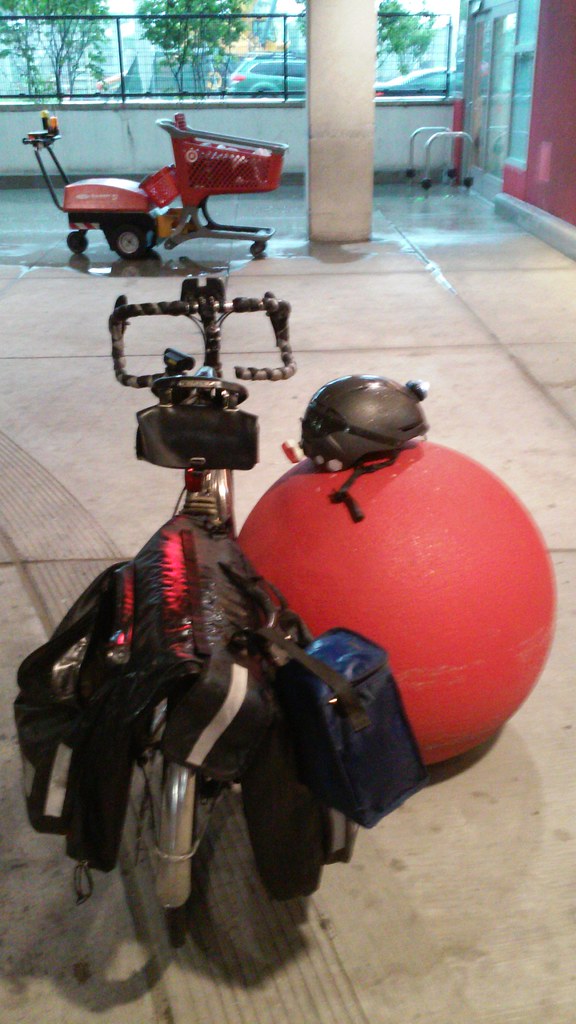 Not sure, balls don’t look right…

I actually considered biking down McKnight to check out the Target there, but that’s well outside the box.

I have a hunch they’re nowhere near a Target. The color is way different.

Ah, I think I have it. Whoever will B First to figure it out will be Golden. All you have to do is Try.

Nice try. But no cigarillo.
The manufacture looks to be the same, though.

The balls are different and there’s 3 of them. You need two more (um, so to speak). Note as well that the tag’d balls are scruffier. I’d bet it’s them dang skateboardin’ hooligans. Oh, and Obama.

Listen to the song again. Or maybe just reflect on it’s title.

I know those balls and I would have been all over ’em this morning had I not been home with a vicious barking/wheezing cough.
If I’m feeling better I may go wheeze my way over to them…

These balls hang out under the Liberty Bridge. 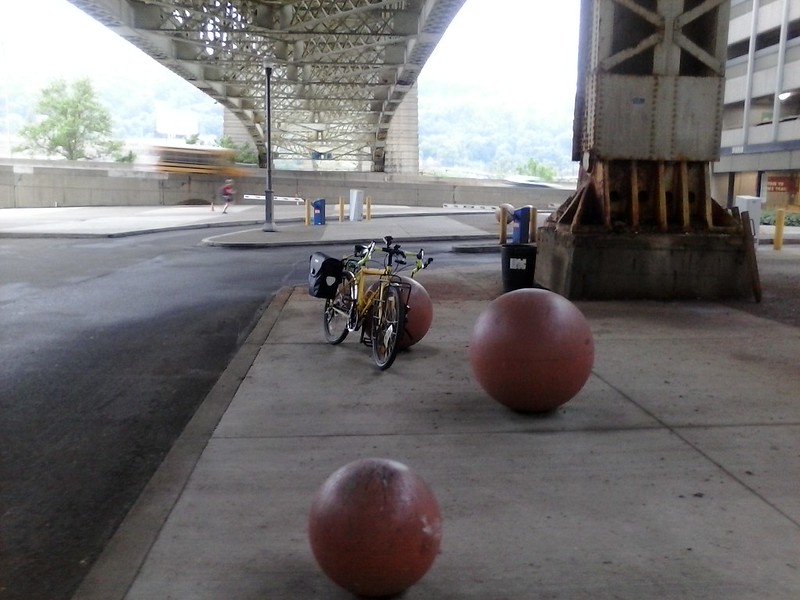 As I suspected, by the exit gates to the First Ave Garage.

ETA: Colleen, how did I miss you? I’ll give it to you, since you posted first — by one minute!

Stu, I Bruced you by a few seconds?
I picked it up around 8 AM, and wasn’t able to post the photo until I got back to the office.

Which of the 50 PiBS stations is this? 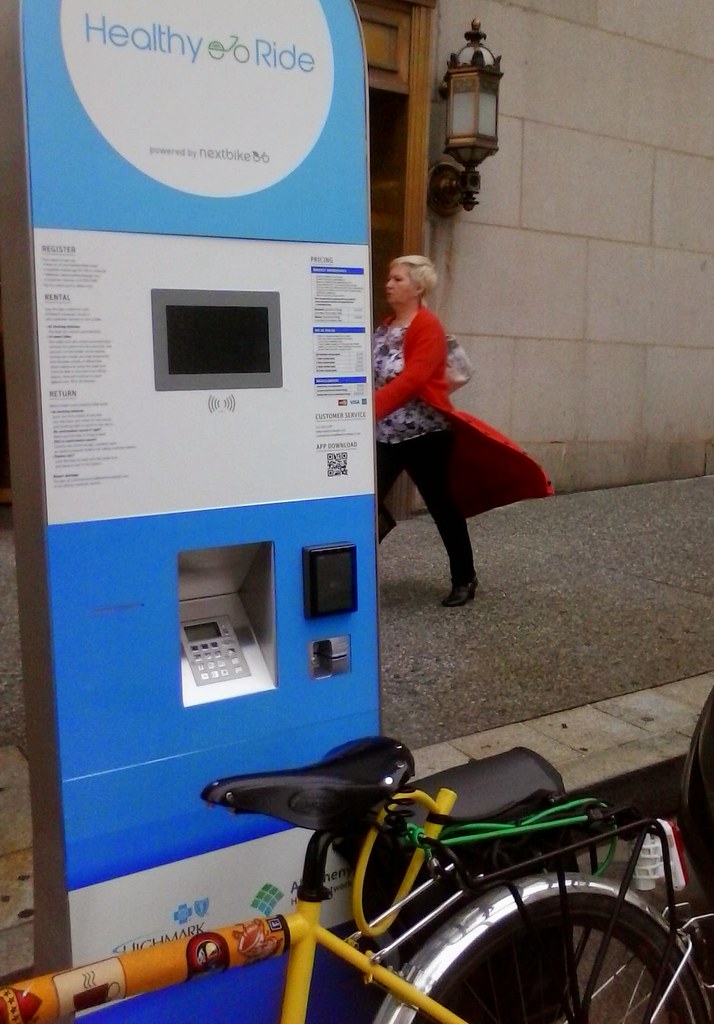 I don’t think it’s the closest bruce ever. Didn’t the original bruce actually have Bruce standing in the photo? And I think I bruced somebody at least once by a very short time interval.
Can somebody please spend an hour or two writing code and processing downloads from the website to verify this?
PS On tag 685 I beat @buffaloBuffalo by 2 minutes. Which is not quite as close at this. But I would imagine the original bruce tag would be closer.

“Can somebody please spend an hour or two writing code and processing downloads from the website to verify this?”

Thank you for the gift, Colleen. This was farther away by elevator than it was by sidewalk. Forbes and Grant, by the Frick Bldg.

The tag pickup ended up taking me almost 20 minutes, despite being 30 feet outside my building’s door and my bike otherwise parked 150 feet away. I got talking with the building engineer outside for a smoke, who recognized me and wondered what I was doing parking my bike there (not to chastise, just curious). That in turn led to another building tenant joining us, and we talked bikes and commuting and the Healthy Ride system for over 10 minutes. Then I rescued a couple of lost people who managed to end up on Forbes Ave while trying to get to Carnegie from McKnight Road (and ESL-speakers, to boot).

The elevator ride down, by comparison, took 30 seconds.

I saw someone pick up a tag once – at the Westinghouse memorial in Schenley.

I don’t play the game and I had not even seen that tag, but it was obvious the guy with the camera was afraid I had come to Bruce him.

I am rather surprised that Mt. Yinzmore has never been tagged.

Under 30th St Bridge, crew in back channel to Washington’s Landing, with Yale 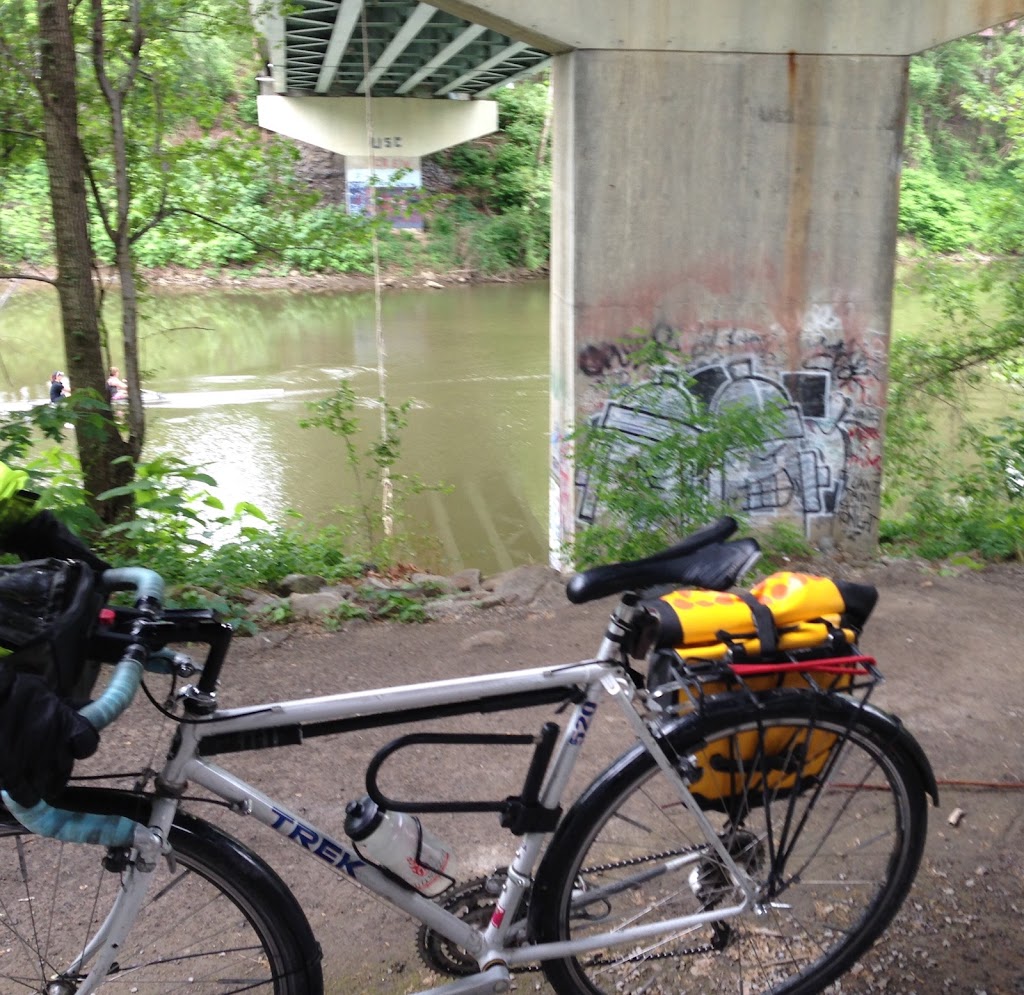 Why is this called Mt Yinzmore?

I have no idea how it got that name. It was spray painted on the bridge abutment a few years ago. I suspect it’s an agglomeration of “y’uns” at “Mount Rushmore”, but that doesn’t explain why. 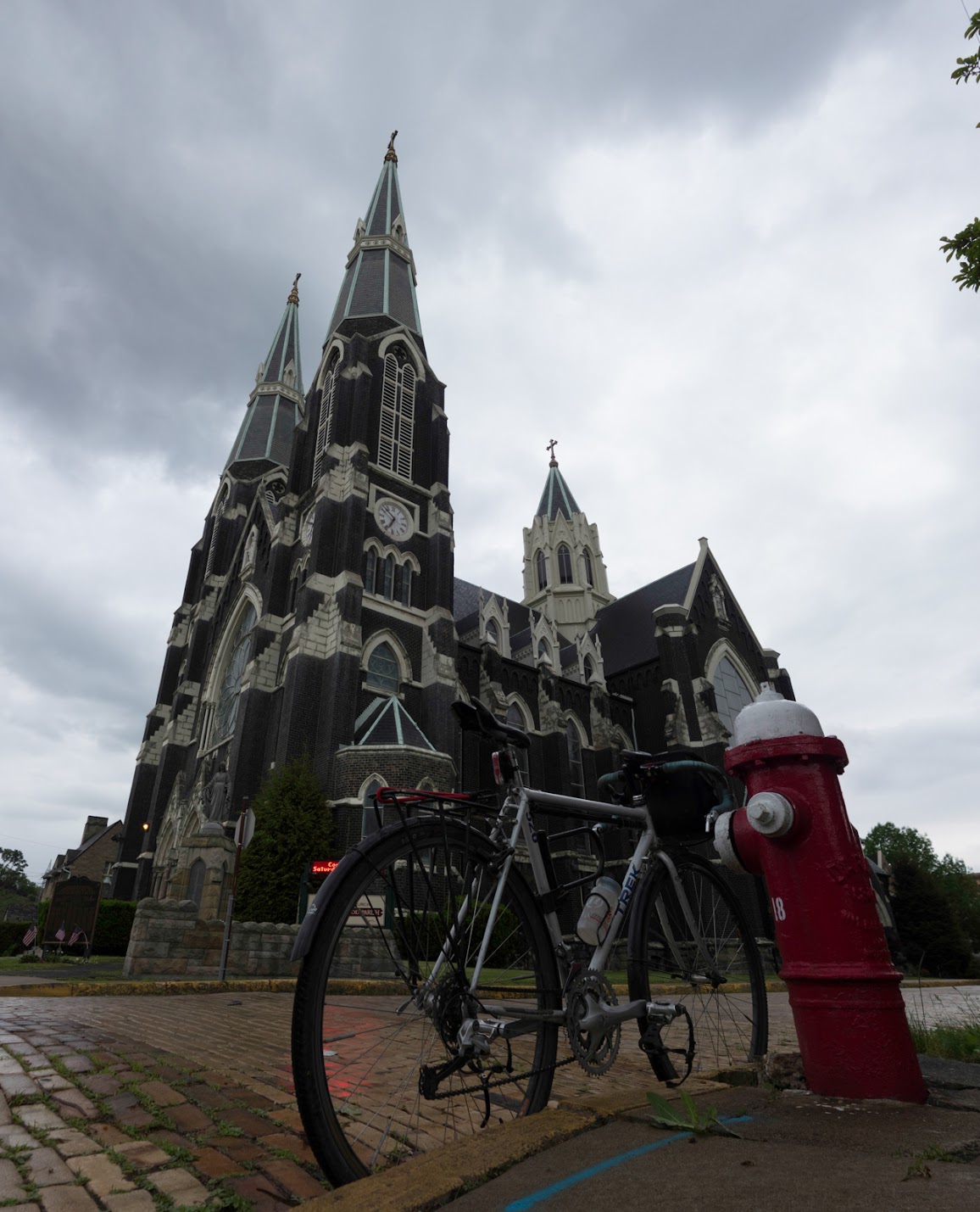 It’s a church. Hope that helps!

Does this narrow it down? 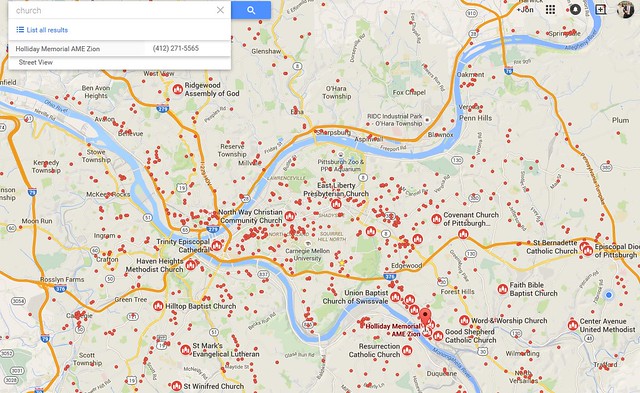 Mick’s got it; it’s a church. As my photoshopping concealed: 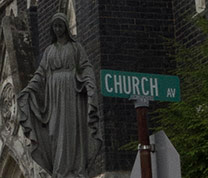 Jon could spell his name slightly differently for another clue.

You funny guys. I like you. I’ll tag you last.

This tag reminds me of the time I was in Bonn and saw people streaming into a church in the evening. But the church was unmistakably Catholic. I asked a bystander if there were a lot of Catholics in Bonn. No, he said, we took over their churches.
A Pittsburgh thing as well, like that Shul On The Hill tag a bit ago. 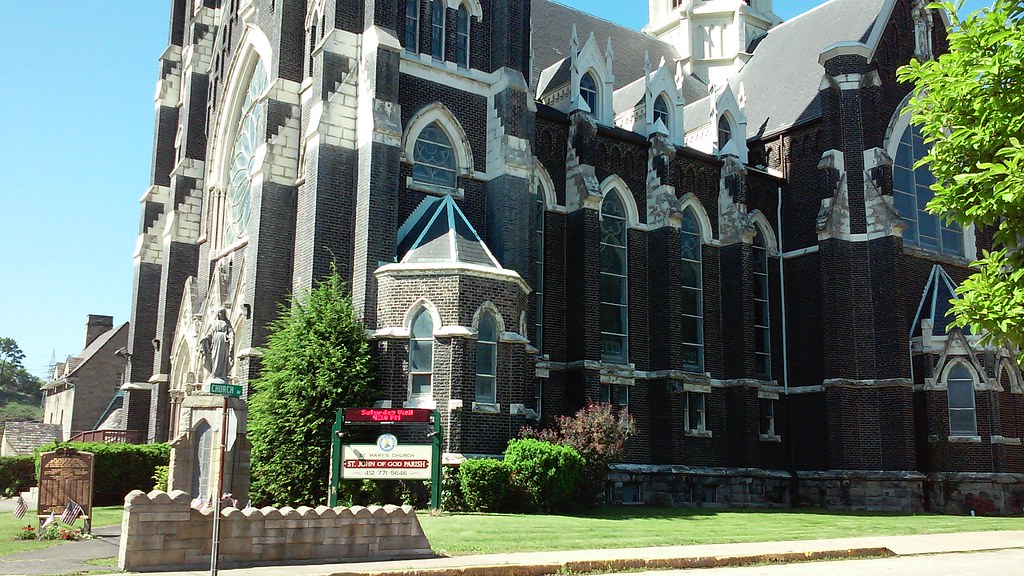 Missed my bike in the last photo 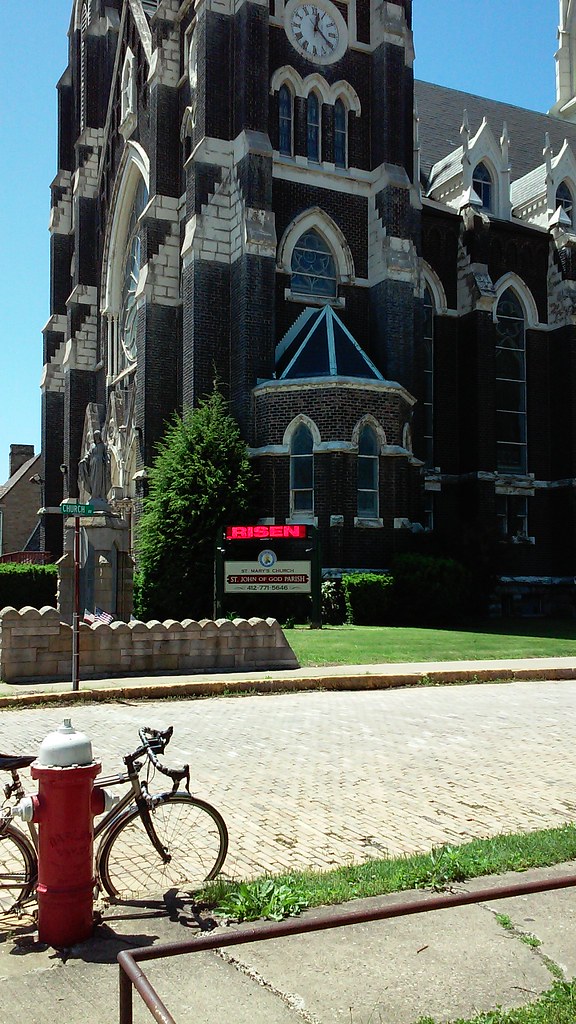 No bike rack, yet
But don’t fret
There’s good things to eat
And owner will be glad to greet 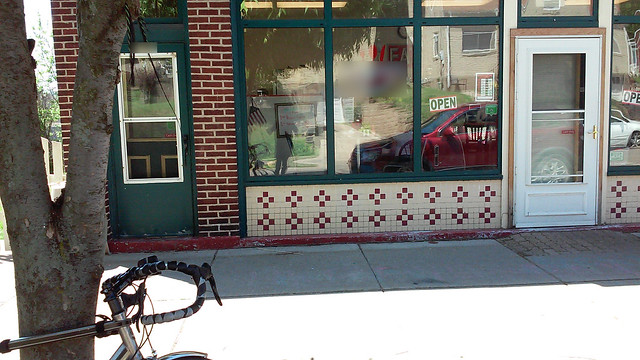 hey, that’s some slick photoshopping… especially on the shadows.