Unpacking this a bit:
* Definitely a building that had to have existed pre-1960, when those fallout shelter signs went up
* Probably also a building that existed in the 1930s or earlier, when sidewalk access elevators were installed in a lot of commercial buildings
* In general, a business district that was built up enough pre-1930 to warrant having sidewalk access elevators, and there aren’t many: downtown, SSide, Oakland, East Liberty, Squirrel Hill, maybe bits of Bloomfield, Shadyside, even Beechview or Wilkinsburg. Most of the old North Side (a.k.a. Allegheny) business district is gone, and what’s left isn’t likely to have a six-bike permanent rack.

I’ve made several passes through bits of downtown I don’t frequent, and I haven’t found it.

McCrea’s office is in Steel Tower, which does not fit the asterisk points above.

I have a good idea of where this might be. I’ll try to pick it up this evening

He mentioned ravine. That’s honest, no? 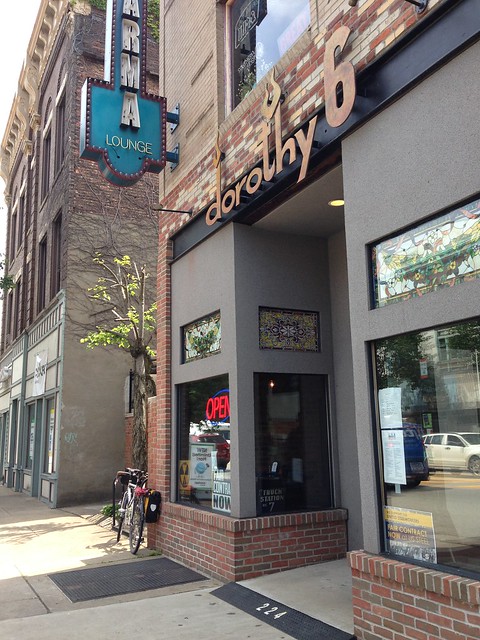 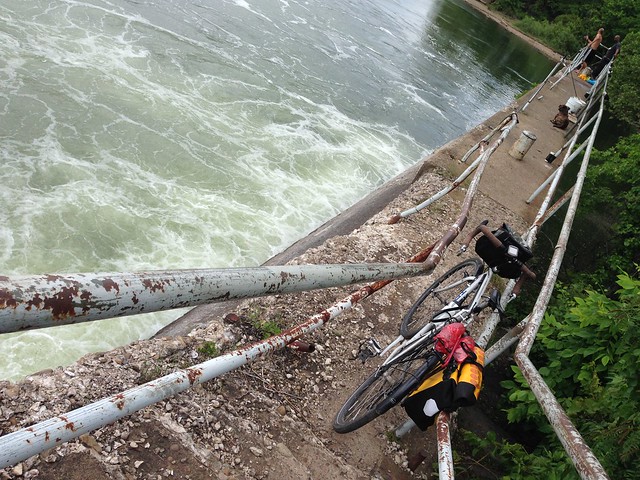 This is an interesting place. A clue would be nice. 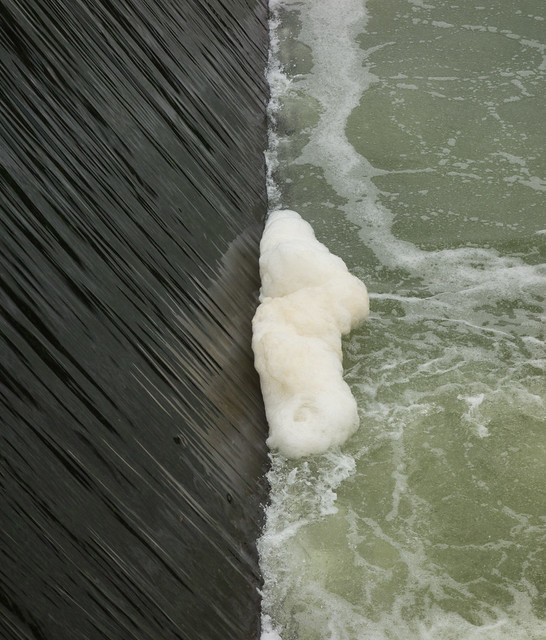 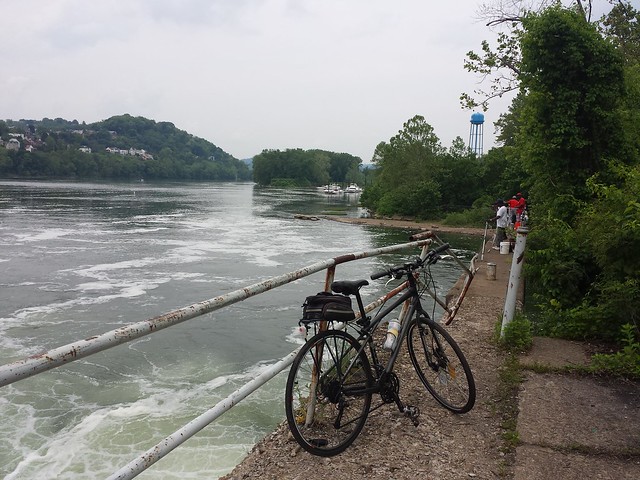 Is this on the Sharpsburg side?

Yes, just below Highland Park dam. Here’s another view.
I assume the railing got bent by ice slabs! 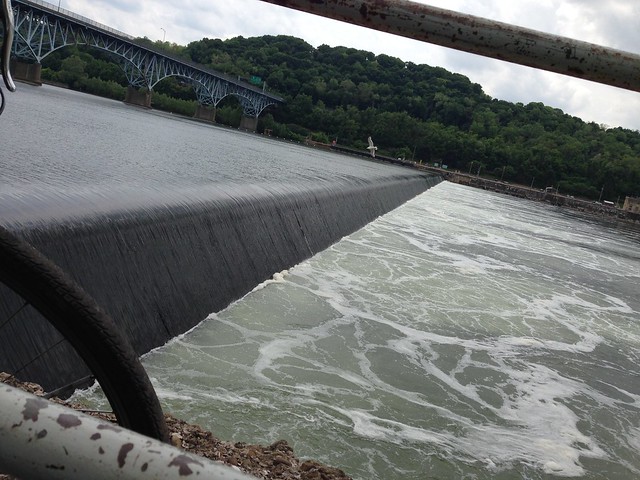 How do you get there? Do you need to go through the river access by Silkys crows nest?

The photos were taken at the red star. Two access points are marked by the yellow icons. 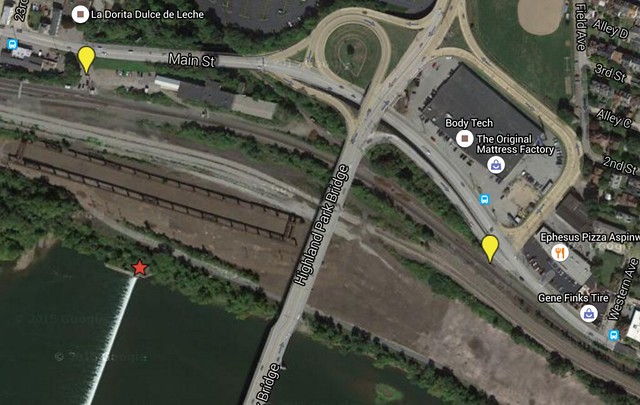 I tried Silkys first, nope. Went north to try from Aspinwall Park, nope. Then used Paul’s southern access point. That’s at the entrance to Ace Bindery’s parking lot. Lots of tracks and an old scrap yard (full of metal shards and glass) to traverse, plus a short, steep dirt path.

As I approached the path, a guy walking asked if I knew how to get to the fishing spot, nope, not yet.

If I were rich and owned a big house, I might pay someone to create a good clue for this hummin’ tag. 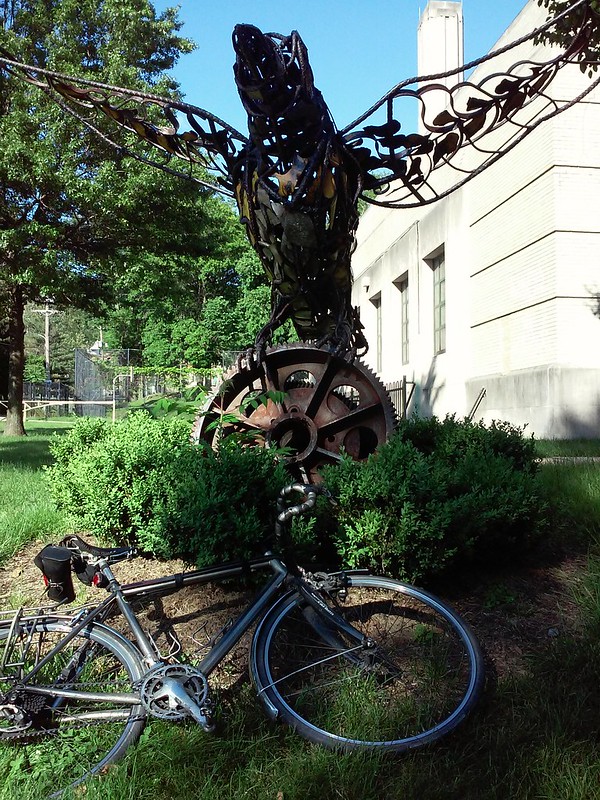 We got stacks and stacks
Of bike racks 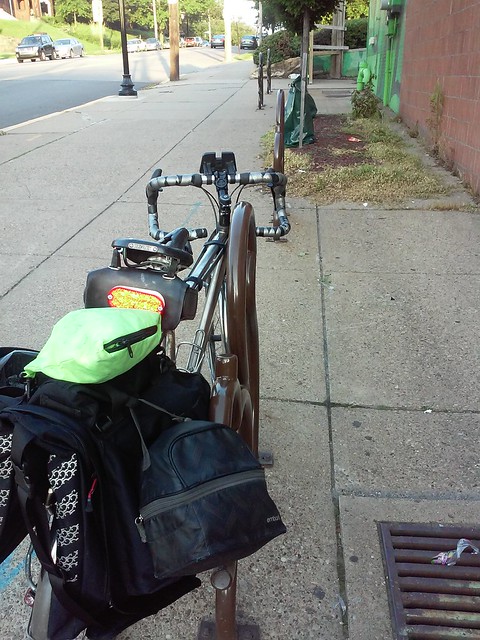 Squirrel racks at corner of Beacon and Murray.

This game is cruel

A place, traditionally, to enjoy Ungulates in varied presentations.

I wouldn’t say that the game is cruel. But I can allow that perhaps you might find reason to call it Game of Tags. (Now in its 5th season!) Still, it’s a game.

Your new tag photo isn’t showing up for me.

A place, traditionally, to enjoy Ungulates in varied presentations.

Former Charlie Ung’s Tea Garden in East Liberty, Tamello Way, East Liberty (back of what’s now Tana Ethiopian restaurant). Apparently their egg rolls and duck sauce were very popular.
“The sweetness of the plum sauce definitely needs the curse of the violent heat of Ung’s mustard sauce, which leaves you almost unconscious for a split second, and when you are back to reality, you realize that your sinuses are completely opened”.
http://old.post-gazette.com/food/20000330dnotes8.asp 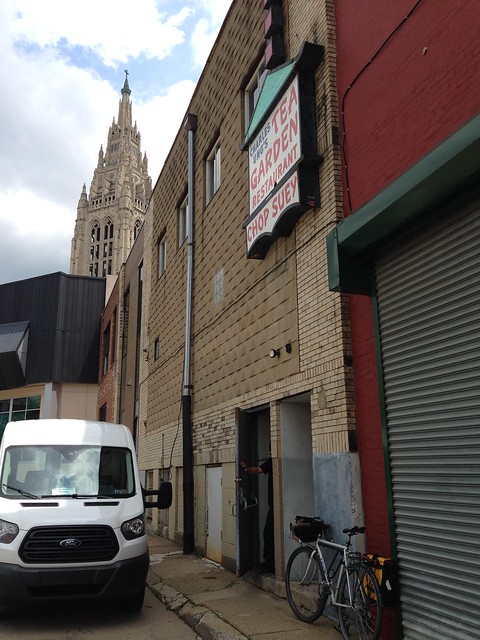 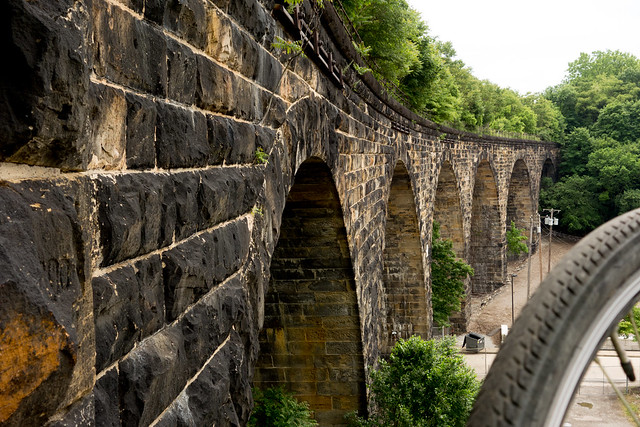 Poor fellow, left behind. Neither headed to a Presidential Library nor scheduled for a flowery Finale. (To the best of my knowledge.)

(Incidentally, the hint for the Chop Suey restaurant did not help me find that one.)
I think the game is most fun when the tags are easier and the game moves faster.

A little while ago some folks posted here noting that maybe tags should show up in some new neighborhoods. A couple were suggested. This tag picks up on one of those suggestions.

It’s on what I think of as a pretty well traveled bike route; a couple of riders even passed by while I was there.

I try to set my tags in public places, preferably ones that regular bikers might pass and not hidden from the street. But of course it’s up to you to look around. This one is adjacent to a stop light; you may even have stood there at some point.

Would it help for you to know that our boy-o didn’t make it to the U.S. Naval Academy either? And, sadly, he missed out on the Pro Football Hall of Fame. Maybe life is cruel after all.

Does anyone know where this is yet?
If not I’ll keep hinting.

Mohamed would need to go to the Mount to get this tag.
Pick the right one, though.

Of which there are two. This would be the lesser one… so less climbing ( think).

Please let me know if you want more hints.
I would like to see this picked up soon.

A-ha, that clue is useful. Now to figure out how to find time to get out that way. Kinda the wrong direction for me, and that’s even before I go exploring for the actual tag.

As I recall, it takes 18 minutes to climb the hill from nearby flat places. Don’t get too glassy eyed when you get to the top, or you might get framed.

darn. i thought all of them were useful…