Pedestrian deaths are up in recent years, in the US. The most dangerous states are in the south, especially Florida.

The Bible Belt Should Really Be Called ‘The Carnage Corset’

Ken Bukowski, 65, one of the few blind bicycle mechanics in North America

Beto O’Rourke knows what a bicycle is. Brief video in tweet.

Presidential candidate: “It was. I just put a freewheel on it.” https://t.co/bA405efQRF

A remarkable thing about Beto: His Dad died in a car-bike crash.

This is incredible to me. Beto's dad was killed while biking. And he still bikes around what is be all accounts a pretty dangerous city for biking. https://t.co/RYIudNTBjZ

A company is selling an electric trike for rental.
https://www.theverge.com/2019/3/1/18246706/gotcha-electric-trike-three-wheel-ev

NOPD Chief Shaun Ferguson said that most of the people hit were bicyclists, but it was not clear if all were on bikes

Road Race Paused After Woman Rider Catches Up With the Men

Nicole Hanselmann caught up with the men’s group about 22 miles into the Omloop Het Nieuwsblad road bike race on Saturday.
Officials paused the women’s race for 10 minutes to give the men enough time to get back ahead.
Hanselmann restarted with her original time gap but was eventually caught and finished in 74th place.

I had no idea New York was going to implement congestion pricing. Awesome.

that was a good NYT article. also seems that other cities (LA, SF, Seattle, Philly…) are looking into it if the NYC trial is successful. NYC will toll cars driving into areas below 60th. What I’m wondering is how they’ll do this, as there are plenty of ways of getting to below 60th. To get on the island below 60th you have to cross a bridge or tunnel from NJ, Queens, or Brooklyn, so that part is easy, but what about the cars travelling on the avenues in Manhattan. Are they going to put up toll readers at every downtown travelling avenue between 60th and 61st (i.e., 2nd, Lex, Park, 5th, etc. etc). It also seems that the FDR and West side highway are excluded, so are they going to set up readers at every single intersection off of those two below 60th?
Very interesting technology and logical issues since cities are laid out like… cities.

If I was doing it I’d require people who drive in those areas to have an automatic system for paying tolls. Something like EZPass etc. Anybody who didn’t have the system would get a ticket.

From what I read on other sites MTA or NYS or NYC or whoever else is in charge doesn’t actually know what the system would look like. There’s an RFP for a system. My guess is that other cities will wait for NY to figure this out first.

London has already figured this out.  They have had congestion pricing since 2003.  NYC will probably just mimic their system.

There are hundreds of roads in and out of London’s congestion zone, and apparently they have lots of signs warning drivers that they are nearing the zone, then cameras are recording the license plates that go in and out of that zone at every single entry point.  Then their system checks for a payment for that license plate number, and if there is no payment for that vehicle by midnight the next day, the vehicle’s owner gets fined.

From what I read it looks like they don’t want to go with a camera based system. I think Americans have lots of privacy concerns that Brits don’t have with zillions of cameras. They want something more high tech. But they don’t know exactly what.

I am so confused. My idealistic and rational self despises such bombastic fossil-fuel infrastructure and yet my aesthetic and creative self finds this Japanese interchange to be somehow fascinating. I need a glass of wine… pic.twitter.com/FK2GrWbOf5

The researchers found that one in every 17 passing events was a close pass (defined as under 1m).

…”In situations where the cyclist is in the same lane as the motorist, the driver is required to perform an overtaking manoeuvre. Whereas in situations where the cyclist is in a marked bicycle lane, the motorist has a clear lane ahead and not required to overtake. As a result, we believe that there is less of a conscious requirement for drivers to provide additional passing distance.”

I agree that passes are much closer with only a white lane separating you in the bike lane from traffic but the white line is also typically magical in that I’ve never had anyone veer into the bike lane while passing and thus I’ve felt safer even with the closer passes. Maybe it’s all psychological.

citibike pulling electric bikes off the streets of NYC due to braking problems.

Not exactly bike related, but @TheIguana may want to know about this.

The day after Dave was killed, another rider was hit two blocks away.  The next day, Abdul Seck, visiting from the Bronx, was killed when someone ran a stop sign and hit another car, which in turn hit Seck, who was walking on the sidewalk.  After that things start to run together, but at least two more people have been injured while riding on DC streets since then—in fact, they met in the hospital.  It’s been kind of a rough week.  For other DC folks, there will be a big rally in front of the Wilson Building at noon on Friday.

Actions you can take for safer streets this week:

Friday: Rally at noon at the Wilson Building: https://t.co/OSJy7Ds5i5

For other non-DC folks, there is a coordinated national action in his honor Friday:

Global Call to Action:
This Friday, 4/26
Place red cups along a bike lane or intersection that you want to see protected.
Join advocates everywhere to #DemandMore.#RedCupProject pic.twitter.com/IcMXzUozNV

(As may be mentioned in the Post articles @jonawebb posted, Dave was in part known for an action where he set out a series of water-filled solo cups along a Pennsylvania Avenue’s center-running bike lane to show how dangerous the rampant u-turns through the lane were, on Bike to Work Day:

A red cup red carpet in the #PaAveCycletrack for #BtWD13 pic.twitter.com/52d3VUVxvl

When that didn’t work, he turned to pool noodles. 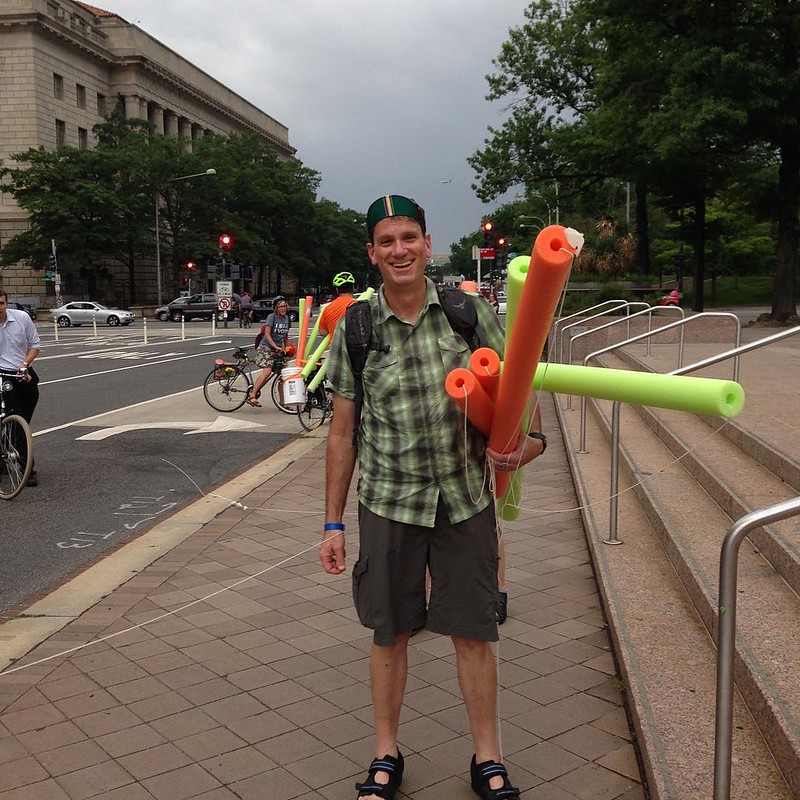 There are now rubber barriers like parking-lot wheelstops (called, in fact, “park-its”) the length of the PA Ave bike lane.)

federal court finds it is illegal to chalk tires of parked cars.
applies to midwest-ish circuit

Heather Cook, the Episcopal Bishop who killed Thomas Palermo while drunk driving, is getting out after having served about half her sentence.

A group of people paid $2.25 an hour to work at a makeshift ‘office’ in a San Francisco parking space, and it shows just how expensive and crowded the Bay Area has become

Edit:  here’s another site with video

Regarding the alcoholic murderous female bishop… she’s getting “points” for working with inmates… I don’t see how that can count for very much… that’s what she was trained for.. it doesn’t show any change… she hasn’t necessarily shown she won’t drink..drive drunk..leave the scene of a crime…while incarcerated…because she hasn’t had the opportunity…she is acting as she did before…and if she could her hands on some booze and a car…would she run someone over and leave the scene…??

A nice video about Tilikum Crossing, a bike/ped/bus/rail bridge (no cars!) that opened in Portland, Oregon in 2015.

Dave Salovesh hasn’t been dead a month, and his ghost bike was taken out, along with the pole it was attached to, by a car estimated at 85-90 mph.

An excellent video on designing streets with cyclists and pedestrians in mind, with examples from the Netherlands: Five Principles of Systematic Safety: