Spent last weekend in Toronto, and there were bikes everywhere! But a lot of cultural differences between us and them – curious to know what you folks think.

It’s pretty typical to have a busy (but wide) street with parked cars all along the curb and a marked bike lane running right through the door zone, with cars (including the crazy taxi we took late Friday night) flying by right on the other side of the line.

Despite these challenges, everyone seemed pretty comfortable with the situation. Like I said, there were lots of riders, and not only young daredevils. ;)

Anyone know the relative stats on accidents and injuries?

I am kind of wondering if they have so many cyclists that they have a “bikes belong” driver culture – if there are always cyclists, drivers learn to expect them and deal with them.

Most of the cyclists seemed pretty lawful too – stopping for lights and such. There were a few exceptions – two crazy people on bike share rentals who cut me off (I was on foot) while running a light into a busy 4-lane street, and Chinatown, which is … well, Chinatown.

Would like to know if anyone else has noticed the same kind of thing and how to explain it.

I biked around Toronto and also noticed the ubiquity of bikes. It seemed like every other apartment balcony had a bicycle on it. Many people appeared to be using bikes for short trips to the market or a restaurant. Very few had gloves or special clothes, many lacked a helmet. 90% of the cyclists I saw in Toronto were using bicycles for basic transportation. Drivers seemed to accept bicycles. In 3 days of biking all over Toronto, I think I was honked at once, by a taxi.

Bike parking on a cold November evening outside a restaurant, College St, Toronto: 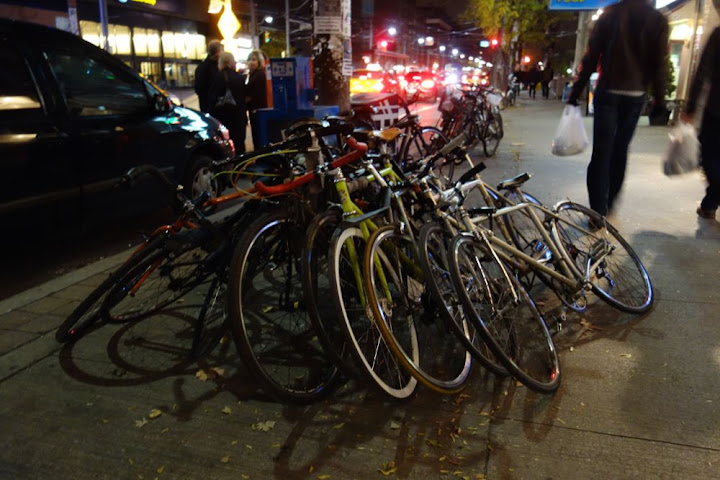 Roll on/roll off made it easy to use a bicycle with GO Train. (2 bikes per train car, outside rush hour, no extra fee) 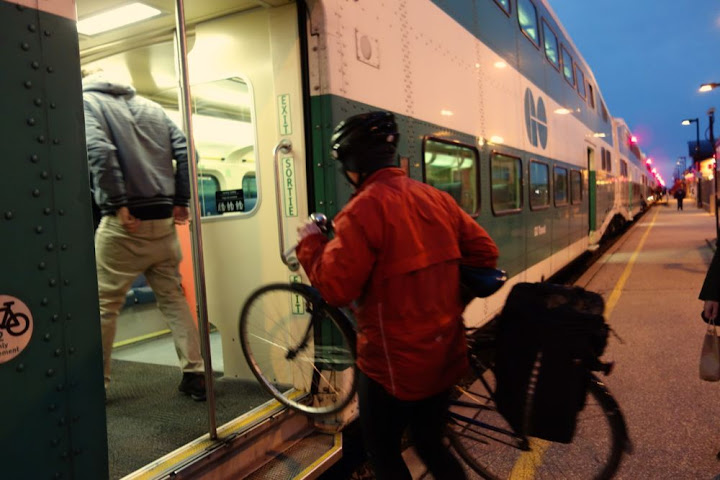