I dunno, I guess I am in the minority here…So Cavendish had a meltdown, so what. I’m sure most of us have had a tirade at some point. He’s only human.

The guy’s a super-talented rider who has really high expectations for his performance. I think the pressure to perform would put a ton of stress on anyone.

He certainly doesn’t deserve a poop-brown “douche of the Tour” jersey or anything horrid like that, IMHO.

I don’t think it was necessarily his tantrum that made him douchey, though it probably didn’t help. He has a bit of a reputation for being uhh, not the most humble of winners.

Re Cav, if I was able to win stages at the TdF I’d probably be a bit of an asshole about it too. However, that whole pistols-in-the-air deal that AC does is definitely douche-collar material.

Hopefully today there will be a shakedown in the GC.

I agree with dwillen–the tantrum was just icing on the cake for his detractors. The way I see it, Cavendish is incredible sprinter when the chips fall his way, but when they don’t, he doesn’t seem to be able to make something out of that. Contrast that to someone like Oscar Freire, who won the green jersey in 2008 when the rest of his team was busy supporting Denis Menchov’s bid for the yellow.

Contador’s pistolero thing doesn’t bother me as much, but his proctologist saddle was a bit much: 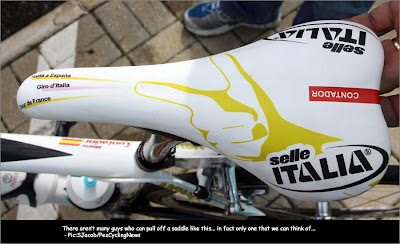 OK, I admit that the celebratory displays and gloating are immature and obnoxious…I don’t think Cav is somebody I’d hang out with, I’m just saying that I understand how the pressure to win could make him act like an ass.

Generally, I expect that he’s insecure and acts like an ass as a defense mechanism…when he screws up, it just reinforces his self doubt and he lashes out. He’s just a kid.

Cavendish is master of such a narrow discipline: the 250 meter sprint after being delivered the lead by Mark Redshaw. He is nonexistent everywhere else.

Plus, as stated by others, he’s so annoying in victory because he is so boorish when things don’t go his way.

Finally Hushovd and Farrar show so much more class and grace, it makes Cavendish’s act all the more unlikeable.

that saddle is too much.

Well, LA’s tour is over. I wonder if he won’t “come down” with something and abandon at some point.

i didn’t see it today, but i saw the recap online. said that lance crashed and then was “out of it” later on. he did tweet this:

“When it rains it pours I guess.. Today was not my day needless to say. Quite banged but gonna hang in here and enjoy my last 2 weeks”

Too bad for Lance. I was really hoping he would have a least be in the running for the yellow for his final tour.

Lance was at the wrong end of just too many crashes. He’ll ride to support Levi, I think. I feel bad for him but shit happens.

can you imagine having lance as your super domestique? good lord…

also, i’m really hoping thor can get himself the green jersey this year. he and boonen are my two favorite sprinters.

am i the only one that cheered when lance crashed the third time?

i don’t understand the pro lance position. never got caught, blah blah blah. it’s pretty much a fact that everyone he rode against was doped to the gills (this will lead to another argument). but really, there’s no way he was clean and beat jan.

i’m super bummed that taylor phinney is riding with radioshack proper.. read into that however..

If everybody else was doping, than why didn’t anybody else win during his seven wins? Not to mention the guy is like 38. Why didn’t any younger guys beat him? He was third overall LAST year.

That was with crazy super doping testing. I don’t think drugs are a substitute for raw talent and maybe that’s why nobody could beat him, he was just more naturally talented than the guys that positively doped.

Plus, I don’t know why crashing needs to be cheered. If you’re going to lose, better to lose to actual talent not to stupid accidents and others’ accidents.

Interesting in comparison, didn’t Cav actually finish after Lance in stage 8? So what’s so great about this guy? He can sprint?

Cav finished 32 minutes down yesterday. With the rest of the sprinters. Welcome to the autobus.

I’m glad the the LA storyline is over the Tour. Sure, it would have been better if he got shelled rather than crashing and getting shelled, but that’s how cycling works sometimes.

The thing that saddens me most about the lA era (which, by the way, is really just an extension of what Indurain started) is that Tour winners became one-dimensional riders. Instead of actually trying to win other events, the entire season was centered around the Tour. Contrast that to, say, 1985, when Lemond took second in the Tour and finished fourth in both Paris-Roubaix and the Het Volk. Oh, and Bernard Hinault, who won the Tour, also won the Giro that year. Oh, and Hinault won Roubaix and the Tour in 1981.

Those were the days, when they rode in snow, uphill both ways. And they liked it.

Very few people are Lance-nostic. I think he’s done a lot for the sport and he is an incredible athlete. I would have liked to see what he could do in his last tour, not have him out of the game due to a string of bad luck.

A spectator caught Lance’s crash on tape. Hard to watch. You can hear him yelling and skidding across the pavement. Ouch.

But seriously, it’s a little bit premature to say his tour is over, if he steps up and helps Levi get a podium, it’ll remove some of that one-dimensionality and show what kind of sportsman he is.

Enter Cadel. winning classics with the rainbow on

overall and also attempting to be a GC rider again.

I hate it. I hate what it has done to indy coffee

shops, but when I was a teenager, all that was

around was the beehive and kiva han craig street. Now I can get coffee anywhere. whatever

steevo, I agree about Cadel. I used to find him to be kinda whiny, but since he won the rainbow jersey, he’s been a totally different rider, and I like him a lot. I really appreciated the work that he and Gilbert did at the end of last season to deliver each other a few wins. Good stuff.

Also of note: Evans has won the leader’s jersey in the last three grand tours.

Not long after I became interested in riding “10-speeds”, Hinault and LeMond were battling. Watching them totally ramped up my interest. Obviously Armstrong has done the same – like Lemieux around here for ice hockey.

sarah_q, are you sure that was Lance yelping? Pretty nasty crash though, must have hurt.

Without Lance what would people yell at us from their cars?

@bjanaszek this is why merckx will always be the greatest rider of all time in my book. and of course lance dopes, i go just go into it like i do football or any other major sport, i assume everyone is breaking or bending the rules to their benefit as much as they can. unfortunately the millions of dollars that get pumped into the sports and the athletes’ bank accounts tend to have that effect.

If that was me skidding 10 meters across the pavement, I sure wouldn’t be getting up to ride 100+ miles and climb 2+ mountains – and still finish way before a lot of the other guys on the stage.

I figure that some US figure will rise to replace Lance.

After all, when Lance was young, cycling, sports or otherwise, was an obscure activity in the US. Now, it’s on the radar.

I’ve read that Lance started out as a champion triathlete, but then realized that bike racers were treated like RaWk sTaRs in Europe. He decided that was what he wanted to be when he grew up.

Got to agree this year Evans is a total badass.

re; Dwillen – and NOT run to my team bus and toss my helmet out the door like a 3 year old.

After yesterdays stage I pretty much decided that if I ever visited the tour, I’d like to wrap a bike chain around my fist and beat down several of the spectators who chase the racers. That’s got to be the stupidest most pathetic thing in all of sports. The 2 lead motorcycles should just carry tasers.

Yeah, that would piss me off. I’m riding a bike, back the fuck up and don’t touch me. Same as in pretty much any other sport I can think of.

Lanced finished something like 10 minutes back in Sunday’s stage. It’s hard to attribute that kind of performance to a crash where he lost less than a minute and today he finished 2:50 back and these are mountain stages. The stages he has excelled at in the past. Lance is just a beaten down man.

I think there were like three LA crashes on Sunday and one involved skidding across the pavement at a fairly high rate of speed (I posted a youtube above).

Evans rode today with a broken elbow and reportedly never mentioned this to his teammates until after the race.

Yeah, it’s too bad about Evans. Did BMC receive an invite to the Vuelta? Maybe he can get his grand tour win there.

It’s a two horse show at the moment, between Contador and Schleck. I’d say Schleck has a chance, but he’ll need an absolutely brilliant time trial to keep Contador at bay.

Schleck has a cool demeanor on the climbs that makes it seem like he can’t get tired.

It does feel like it’s shaping up that way. And is it just me, or does it also seem Alberto isn’t getting a whole lotta love from his team? Schleck’s chances took a hit also when his brother went down.

I think Astana is riding pretty well for Contador this year. Vino’s move seemed suspect at the time, but likely help shed a few riders from Contador’s group. Daniel Navarro did a ton of work to whittle the group down on the lower slopes of the last climb.

Schleck has a strong team, too (likely stronger than Astana), but they have to be careful not to burn the wick at both ends over the next few days. 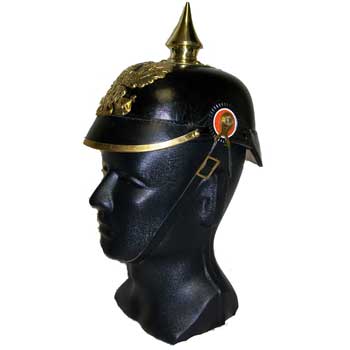 Well, so much for Hushovd for the green. Word on the street is that he isn’t feeling 100%.

Cav’s win today was pretty impressive–he started that sprint a looooong way out.

Edit: Renshaw was booted from the race for headbutting Julian Dean. Cav can’t be happy about that.