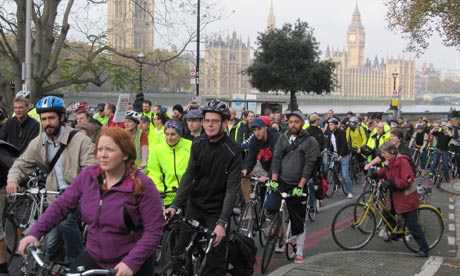 Written by one of the organizers.

“A cycling sight-seeing tour with a difference took place on Saturday, taking in London’s 10 most dangerous junctions for cyclists… more

…the site of 86 cycling casualties in the last 24 months…

that line jumped out at me too, especially since some gov official says they think there’s no problem with that intersection. Regardless of the traffic volumes, that seems like such a high number.

this one hit me: “Attempts by the local London assembly member, John Biggs, to have pedestrian crossings introduced at Bow, were rebuked because they would cause traffic delays”

as well as the later indications that TfL is actively seeking to remove cycling infrastructure and SPEED UP traffic.

what %age of total cyclists through that intersection is 86? We don’t have the volume so I’m not sure, if we did have a tour du danger, where would it go?

That’s the same issue over here. DOTs develop surface transportation corridors for the safety of the motoring public. However there exists often unwritten quotas for accidents and casualties that when achieved will cause DOT to review and make “improvements.”

Before NACTO et al., there were no clear standards or best practices for planning, designing and constructing corridors (roads, bridges, etc.) for the safety of all public users and not simply motorists.

From the article: ‘A series of “flashrides” have been held on Blackfriars Bridge, where plans to increase the speed limit, rip out cycle lanes and increase the traffic lanes from two to three each way (on a road where cyclists make up the majority of traffic at peak times) were met with anger and dismay;…’

Rip out cyle lanes on a street where sometimes the cyclists are in the majority? What is up with that? Maybe there si something there I’m not seeing, but it strikes me something is wrong with that.