My preferred commute takes me across the NS railroad crossing under the 62nd St. Bridge in Etna/Sharpsburg, then along the dirt access road to the NST in Millvale. A few months ago a public hearing established that this crossing is public. It’s unclear to me whether the access road is private property or not, but I regularly see joggers, cyclists, fisherman, and up-to-no-good packs of teenagers, and I’ve passed railroad and local cops there without anyone indicating to me that it’s not public.

Lately I’ve noticed that the trains like to park in a way that blocks this crossing. I don’t know if it’s intentional or not, but my guess is that it is, by the way the trains often park with about 400 meters of cars obstructing the entry. I’ve (thankfully) never seen a train stopped to obstruct access to the Aspinwall or Millvale Riverfront Parks.

My sense is NS doesn’t want people crossing the tracks for safety reasons, but this deterrent probably makes things less safe, as it encourages people to walk along the tracks and cross in less safe areas than the grade crossing with plenty of visibility (or, worst case scenario, cross between parked train cars where it’s hard or impossible to go around). The other day I saw several people who had driven trucks across to go fishing get trapped when a train blocked the crossing. I have no idea how they got out.

Do you guys think it’s worth writing to the railroad about this, or is it better just to don’t ask/don’t tell regarding property rights along the river?

This is from the 62 Bridge this morning: 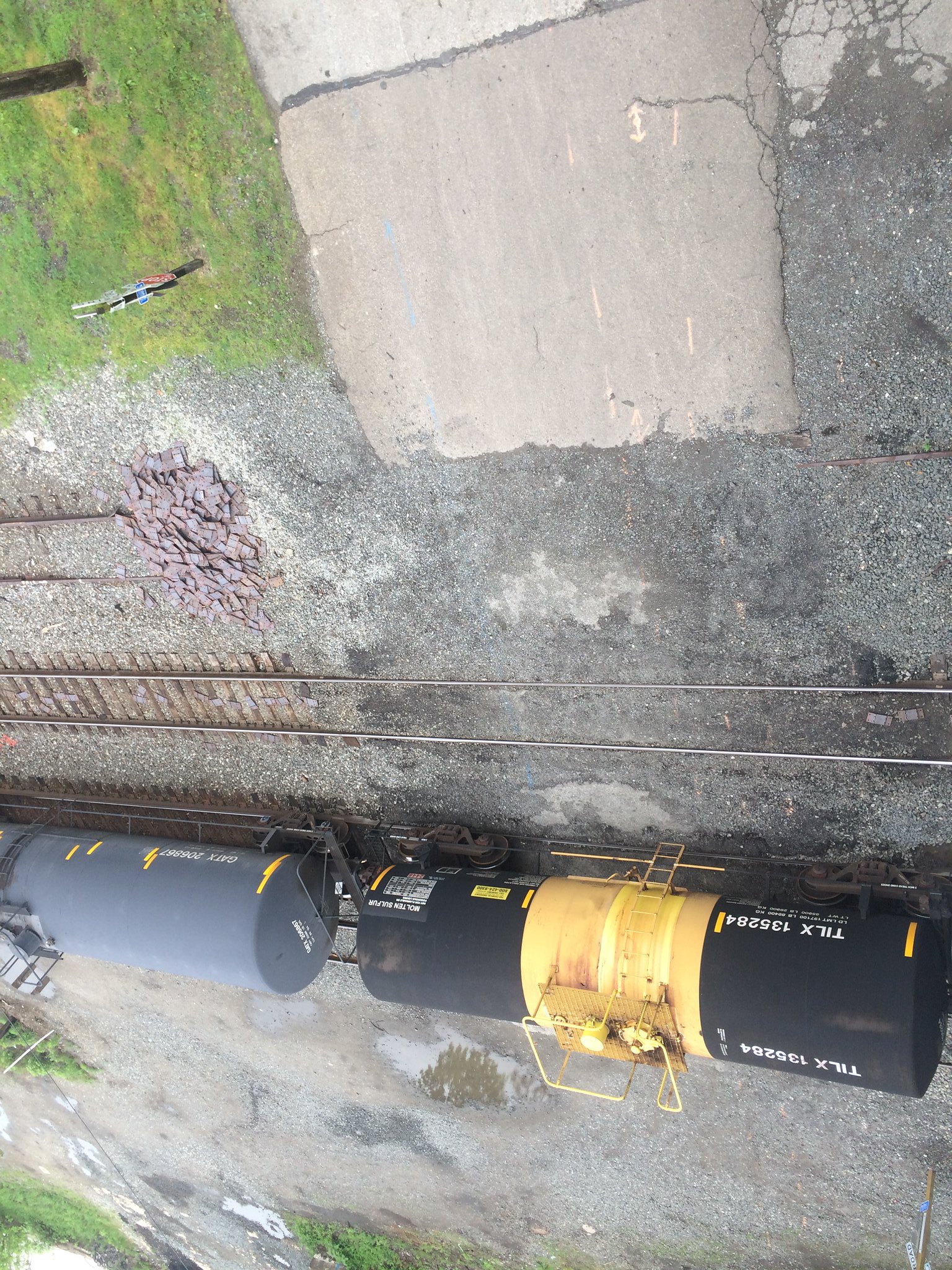 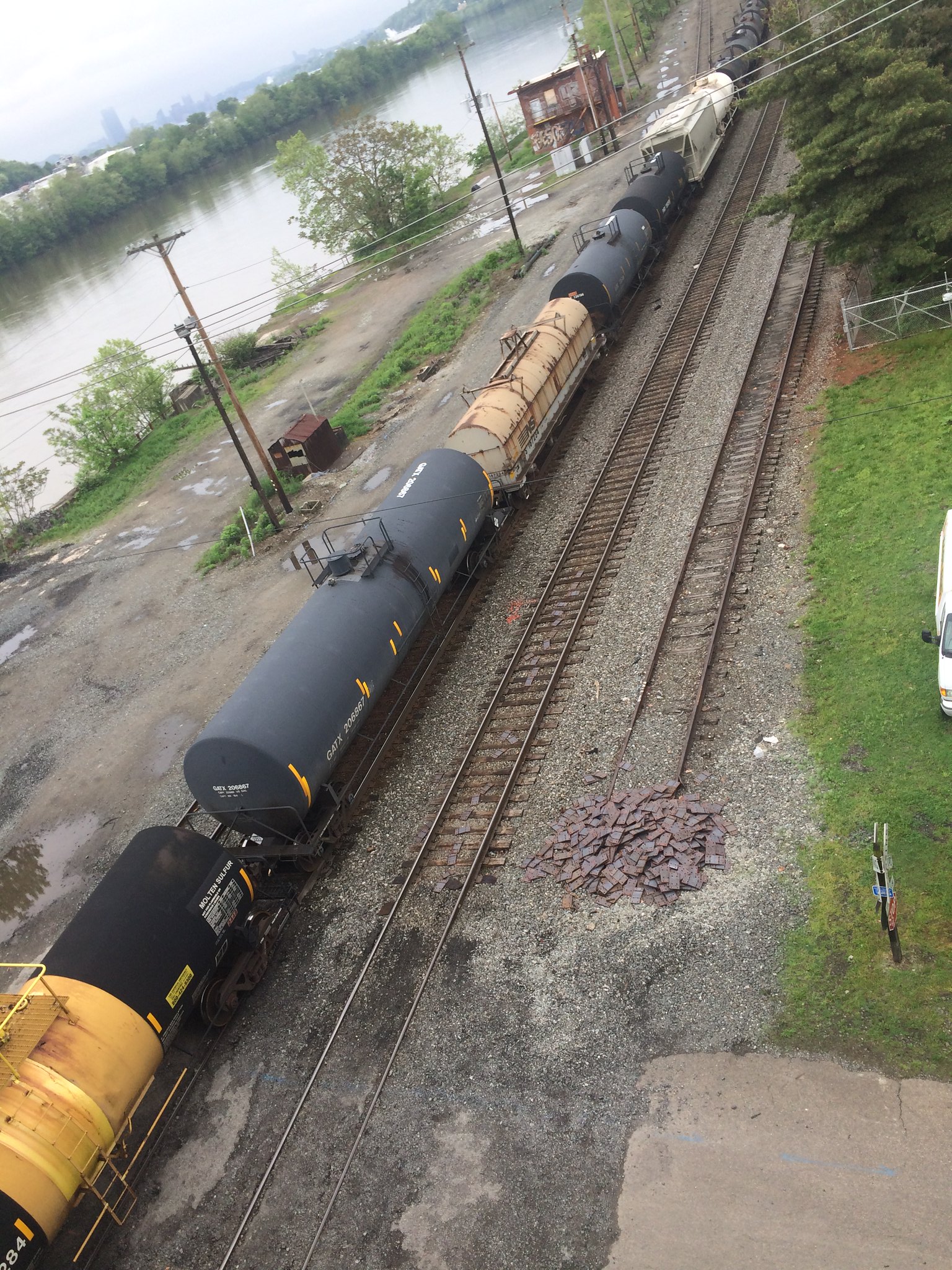 Start with Matt, the mayor of Sharpsburg. He’s super responsive and would know how to fix it or know who you could talk to. He’s connected into all of this. And a great guy. I bug him all the time.

I can’t imagine anything changing by writing the railroad about it.  I ride through there sometimes.  I just walk my bike around the train wherever I can and make my way to the road at the crossing.  They have been doing this for years.

Etna is supposed to start construction on a riverfront park in the fall, in that bigger flat area on the left of your 2nd photo, so I would assume that when construction starts, the trains will stop blocking.  So it should be resolved in a few months, basically.

BTW, yes, it is a public crossing. They are impeding a public crossing by parking their trains there. That’s why the boroughs should handle it — it’s on the Etna side, but it still may be sharpsburg. That’s why it’s better to talk to the mayors and have them sort it out with the railroads.

Once a decent connection from Etna to Millvale is made, I will be riding this trail all the time. Unfortunately, I just put 25s in my bike and cannot traverse the railroad ballast. Also, I will not get my bike back for five more days. I really wrecked the rear drive train right after I changed the tires over two weeks ago. I was supposed to get it back today, but Performance needed authorization to order a new derailleur hanger. I also think all the unavoidable potholes is putting a lot of wear and tear on my bike.

FWIW, the RR may be violating state law. This federal site displays the law in PA and other states on various RR subjects. Click “Blocked Crossings”, then the state. Note that one exception for the first of the cited sections of law is “When there is no vehicular traffic waiting to use the crossings”, but the second section doesn’t list exceptions.

I think blocking level crossings should be illegal regardless of what is waiting to cross. If pedestrians or cyclists want to cross, they should be allowed to press charges against the railroad.

Another angle that might get results, in addition to talking with the Etna borough people, would be the Pennsylvania Public Utility Commission (PUC), which has some power over the railroad companies. I’ve never dealt with the PUC, but a browse of their web pages suggests that this might be a good starting point for your complaint:

FWIW, the RR may be violating state law. This federal site displays the law in PA and other states on various RR subjects. Click “Blocked Crossings”, then the state. Note that one exception for the first of the cited sections of law is “When there is no vehicular traffic waiting to use the crossings”, but the second section doesn’t list exceptions.

Steven, there is this exception:

(1) When necessary to comply with signals affecting the safety of the movement of trains.

Any aspect (signal) is engineer must to comply with it. Any movement over red aspect automatically generates an alarm and this alarm is subject of further investigation.