Great event! Three cheers to Hyla, Dan, Bill, Colin and all the others for organizing and bringing their bike collections.

Also, I think we had almost two dozen folks not affiliated with Bike Pgh or Flock show up and try riding the bikes. Just bike-curious folks driving by or who saw the event in City Paper; and Aaron AKA bumper-bike!

I shot over 40 minutes of video, haven’t figured out what to do with it all. Those that are just me, I will post, but I don’t want to post anyone else without checking with people first. Snippets here and there might make a nice montage for next time. So if you have any video editing skills (mine are meager), hit me up, okay?

That was hella good fun. Thanks to all who volunteered, loaned, or just showed up and helped make for a fine day.

And thanks for those fantastic peaches. :-)

Out of idle curiousity, did anyone get an overall head count?

The mountain bikes and obstacles were a fun new addition: who knew going over curbs and logs & such on a fat-tired bike was so much fun?

This event is nothing without many volunteer hours + goodwill + bike loans + Flock of Cycles as presenters…thanks to everyone for making it happen (although I think a Dan B gets a special prize for tireless enthusiasm and bike hauling).

We definitely had a bump in attendance due to the City Paper listing, but due to its brevity, some important details were left out, such as that it was all adult-sized bikes and that helmets were required. So several us lent our own helmets (ewww…but you can’t just shampoo away a concussion…)

The peaches were awesome.

I counted around 70 names on the waivers, including a half dozen kids who were signed in so parents could give them rides on the cargo bike or whose kids were tall enough to try a few things. That plus probably 10-12 more who had signed the waiver in the past year and didn’t need to do so again.

A few people showed up who were expecting it to be more commercial and run by bike shops and/or who were hoping there’d be kids bikes. So, those are areas that could be expanded, but it would be very hard to do without more volunteer support and/or financing.

Some bike shops/businesses extended very generous loans to this non-commercial event, which was well rounded out by bikes from individual collections. We had at least 50 different bikes and unicycles.

Glad I was finally able to make one of these this year. Got to try out the tandem, a couple of the recumbents, both of the cargo bikes, a folder, the Krampus and that sweet single speed All-City. Had a lot of fun and look forward to next year. Thanks to all of the folks who donated their bikes or their time to make this happen.

here is a link to my facebook photo album

and my blogpost with photos for those who dont have facebook

I had a great time and I loved riding the Krampus The people who showed up to try the bikes were very cool. The old dudes who re-connected and met from distant compass points. The mother and daughter team were something, they had a blast. I hope that teenager has some sense of how cool her mom is.

This was so much fun. Thanks for having it. And I found my new bike love-vintage Raleigh folder. We’re already arguing about whether to find a green or a red one. So cute!!

sarapgh2 wrote:We’re already arguing about whether to find a green or a red one.

@mikhail ha! Husband just fixed up a green Raleigh sprite so I want a folder to match.

i think my mom is totally sold on a mixtie now. thanks Hyla and Sarah!

sarapgh2, if you’re still liking the Raleigh folder, I can probably make you a deal. Thinking of making some changes in the stable. PM me if interested.

Me thinks it’s never to early to make requests…
http://www.butchersandbicycles.com/index.html

If we are repurposing this thread for 2014, can we please get the date right? My 2014 calendar shows that Saturday to be August 23.

It is likely to be during BikeFest, and probably a Sunday this year (so those with lack of Saturday availability get a chance to attend for a change).

Deleted. Nevermind! Found the info for this year:

Thanks, @rustyred. I completely forgot to update this thread.

Note also that the title of this thread is incorrect, as it was originally for last year’s event (don’t ask me why it says “2014”).

As Rusty posted, the event is this coming Sunday, August 10th, from 10 AM to 4 PM, at the Bud Harris Oval on Washington Blvd.

I realize it’s probably too late for this year, but I think getting the Party Pedaler to show up and run people around the track could be fun. They could sell soft drinks instead of beer if alcohol sales would be an issue.

There’s gotta be a safer road than Washington Blvd to access this, right?

Negley Run to Washington (New bike lanes!!), but then you can wiggle your way through the fire training area and police station lots to get to the oval and avoid Wash Blvd itself.

Man, huge thanks for all the folks who put this event together. I love it so much! It always takes me a little while to get un-shy at events like this, but it’s always so worth it.

the two total surprises for me this year were:

a) how much fun the electric-assist bikes were. I had kind of set them up in my mind as something for people who are not me — people with mobility issues or whatever other reason for needing an assist. It seriously never occurred to me that it might just be fun to HAVE the assist, rather than to NEED it. They were a total blast!

That was fun! Thanks to everyone who organized this. I’ll post photos soon.

Can the moderators really not edit titles? Or just too lazy?

Had a blast! Special thanks to Hyla and Nick for bringing water and Dan for shuttling extra bents all the way from State College for our trying pleasure. Lots of great bikes, so thanks to everyone who brought one! Thick had some notable crazy bikes.

If budget weren’t an issue, I’d be running out and buying at least two bikes after today.

Walked up a trail after the event which was a fun challenge and coasted back down via Negley Run (really nice route, actually).

Thanks to everyone that made this happen. Dan really goes above and beyond getting all the recumbents and working all day with people. I don’t think he gets a minutes break, adjusting, explaining, spotting… Very good of him!

Appreciate everyone that brought bikes, especially all the unusual ones – Chris (Thick Bikes) brought a great selection!

That was a ton of fun!
Thanks to Flock of Cycles, Fiks, Thick, Adam Solar Resources, edmonds59, Stu, Marko, Monster Trikes, Sloaps, PAT Transit & several individuals who also brought bikes to lend. Tons of fun. Reddan does deserve some kind of prize for tireless and enthusiastic Bent’ophilia. I think was the biggest range of ages yet. Check the photo album link Stu posted above to see Thick’s Penny Farthing in a PAT bus rack!!

That was fun! I tried a bunch!

This is a very strange bike. I hated it. Pressing on the pedals affects the steering – a lot. Prone to wobbling. Nick’s tall bike. I tried it. It handles quite well! Getting on & off takes practice. Nat gets on the penny farthing. With a wheel this size, your legs must be long or you won’t be able to reach the pedals. Getting on the seat is tricky, also. It’s a fixie, of course. Does anybody in Pittsburgh have a short-adult-sized or kid-sized pennyfarthing? Reverse-steering bicycle. Even walking it was exhausting! The cargo bike was popular. “This is a very strange bike. I hated it. Pressing on the pedals affects the steering – a lot. Prone to wobbling.”

I tried it twice before I gave up… almost as awkward as the reverse-steering bike, but at least I made it more than five feet (actually made one full lap on the front-wheel drive recumbent).

Yes, I am wearing a motorcycle helmet. That’s how I got there, and I didn’t think to bring the bicycle helmet. Or I thought about it and didn’t want to be bothered carrying it. 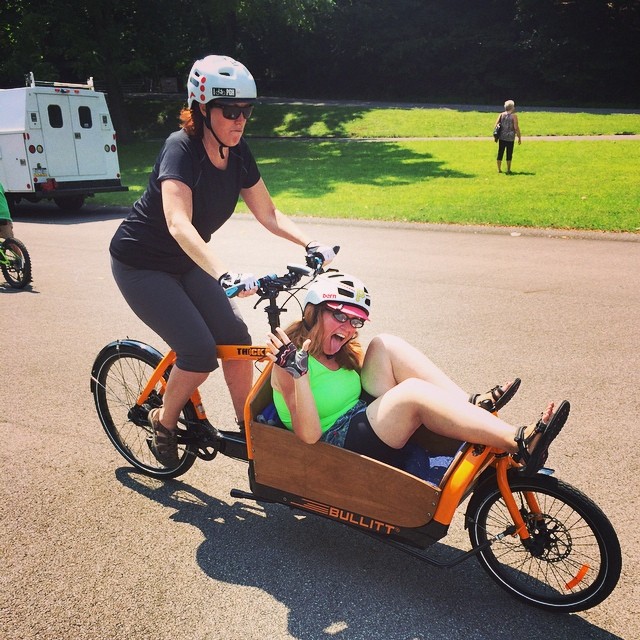 Put this on the wish list for 2015. A simple, small hauler – although I think it needs a multi speed internal hub for hills.

…so, it’s the brompton of cargo bikes? I can get behind that…

(…or is it the cargo bike of bromptons?)