Walk your bike in the bicycle infrastructure

So I once swore up and down that I would not use the chute between the jail trail and saline street, but since it is almost impossible to make a left onto second ave now (UPMC employee traffic and greenfield bridge detour), I have been using it outbound.

I guess someone’s solution to making this “safe” was to post a sign saying bicyclist must dismount and walk. I didn’t notice a sign on the other end from saline street. I think most cyclists take the road inbound because it makes sense and it flows well.

The paint has worn off, but I am pretty sure that there were bicycle symbols panted on the sidewalk leading down to the chute, and perhaps even a sign directing cyclists to it. So was this is was this not for cyclists at originally?

For those of you who have been riding in the city for a long time, I was wondering if you feel the same as me:
All of the “incomplete” infrastructure is making things more unsafe than when there was no infrastructure. Or at least I feel less safe.

Was I wrong to think that having a “progressive” mayor would make things happen quickly for us?

let me also mention my frustration with major trails being closed. No detours. This would NEVER happen to vehicular traffic.

This is not intended as a dismissal of your concerns, but really, things are fkd up everywhere, for everyone, pedestrians, cyclists, drivers. The people who plan and implement public works projects and development don’t (usually) look at the impact of the work beyond their own gdamn noses. The city, PennDot, developers, contractors, need to be held accountable to execute their projects while having the least possible impact to the greatest number of people. Along with the bike infrastructure, one of my bigger beefs is the Forbes avenue corridor downtown, that has been effed up for years. The city needs to tell the developers in situations like this – you have one month to accomplish what you need to do, then it’s $1,000/a day, just for example. Tell any young people you know who are cycling enthusiasts, don’t go into bike advocay per se, go into engineering, civil engineering, planning, public policy. Get into the gears of the machine. Rant over. :)

The law (PA state law, for example) limits what the city can do. And topography and previous land use decisions limit what can be done with road improvements. The chute is the result of a really screwed up intersection where multiple roads and a railroad all come together; it’s hard to fix. And the city wouldn’t be able to enforce an arbitrary fine against developers. Just wouldn’t be legal.
That said, there are lots of missed opportunities. PennDOT could easily have included bike amenities in the Boulevard of the Allies and West Carson developments. They just didn’t do it. PennDOT is a particularly bad actor here, with the opportunity and the funds to fix problems.

A tunnel underneath the tracks up to the UPMC parking lot would rock.

I’ve been ignoring the “walk your bike” sign as long as I’ve used the chute. OTOH, the presence of the sign makes me far more rigorous about shouting repeatedly at the blind turns.

They could take away one inbound motor vehicle lane and do that chute correctly. I haven’t been there during morning rush hour, but I’m guessing that lane wouldn’t be missed.

@lee – What we really want is a suspended roundabout. Like
this. 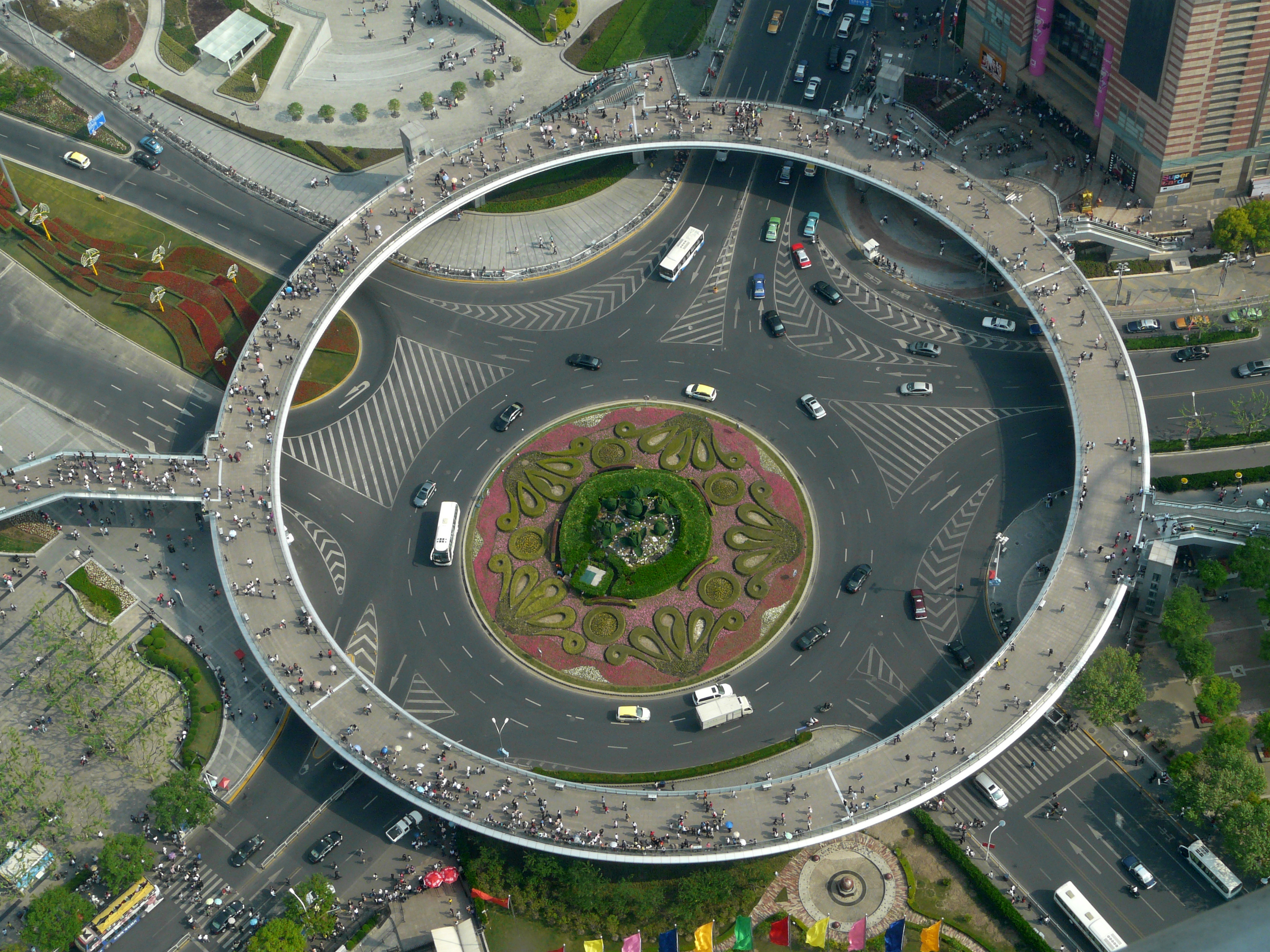 The board won’t let me post four links at once, so here’s the rest of that.

Also known as a hovenring. 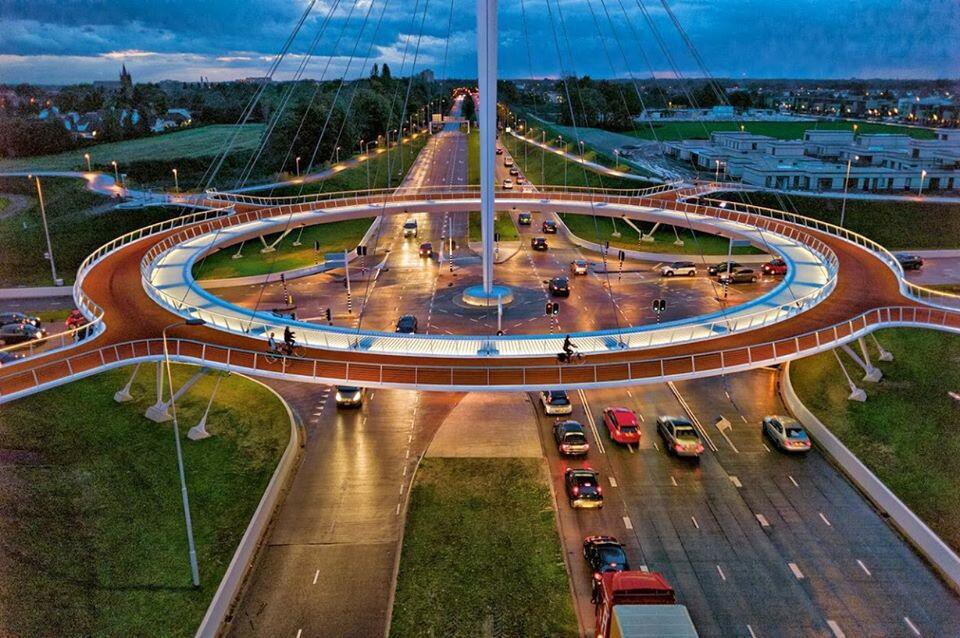 (PS: I think the hovenring would be a bad idea for Pittsburgh right now. It would be enormously expensive, sucking up all funds for bike infrastructure for years to come, serve as a rallying point for people saying we’re wasting money on bikes, etc. There are lots of lower-hanging fruit. Hey, even dedicating the Wabash Tunnel to bikes and building a decent connector to the South Hills would be cheaper and easier.)

…sucking up all funds for bike infrastructure for years to come…

Y’see, I think differently. I think we take money from road projects and dedicate them to bike infra, not think of it as that we can only spend X on bike infra over the next Y years.

We did this for transit a few years ago: In order for Port Authority not to kill all the bus routes in 2005 (that they ended up killing in 2011), Gov. Rendell zapped an I-79 overpass project.

Identify the need.
Justify the need.
Figure out what it costs to fulfill that need.
Find the money.
Five mil? Ten? Really, that’s a couple of traffic light replacements. One bridge, somewhere. One triple-left-turn lane in Cranberry.

Never mind the money. Figure out what it costs to do it properly (almost certainly seven-maybe-low-end-eight figures), get that paperwork to the table, and have it out with the billions-upon-billions boys. Play hardball.

When I read about the “CAP” that’s been funded for the base of the Hill,
I think it would be a perfect opportunity for a Hovenring.

The reason , as I see it, that you’re supposed to dismount, is because of pedestrians. I’ve almost hit 2 this summer riding my bike through this odd “Shute.” But I make sure I go slow around the turns and usually shout something.

It was so much easier when we could just walk over the tracks.

Plus, there needs to be good mirrors around these corners.

Dismounting would be safest, all in all, but I know that cyclists hate to have their momentum stopped for any reason. I don’t dismount either, but probably should.

But stefb, is your point that this chute is for cyclists only? Or that we shouldn’t have to dismount? In all fairness to pedestrians it is a dangerous corner if there’s a cyclist on the other end of that blind corner. A mirror would be really helpful and cheap here.

The basic problem is, it doesn’t work now, and it certainly won’t scale up as ridership increases.

Over the tracks is the easiest and best solution, legalities aside, but we really need to provide for a system that can handle 20 people a minute, both directions. We already see sporadic peaks at that level. Add in Almono traffic, which is certain, and the strong possibility of a connection from Squirrel Hill via Pocusset, and we may need to handle 50 people a minute.

A hovenring would handle 100 people a minute.

I think the issue is – when was the last time you saw a sign that said “Drivers must push cars?”

Cyclists are often treated as less then equal road users, and being told to “walk your bike” is the most obvious example of this.

PennDot/County/City may talk like they have our backs, but then they show their real stripes when you encounter these signs.

Maybe a tunnel under the tracks would be a cheaper option? It could start from the park near Big Jim’s, say at the corner of Alexis and Four Mile Run. The RR tracks are already above street level there, so perhaps it wouldn’t need to descend much or at all. It could go southwest under the tracks and then climb up along the back edge of that big parking lot.

My point is that it is another example “here is bike infrastructure!!! Look how great it is!!! Celebrate!! Boosterism!!!” And it isn’t complete, and to make things worse, we are now told to walk. more and more infrastructure is being taken away, and somewhere someone is making these poor decisions. There are other solutions that are inexpensive. We have spoken about mirrors and the worry that they would be vandalized. I have seen mirror cages elsewhere. Also, I don’t think that safety features for vehicular traffic aren’t installed because of fear of vandalism.

I was also asking for a clarification. The painted bike icons on the ground at one point led me to believe it was where people were to ride their bikes. Was or was that not how it was?

It’s always been walk your bikes, AFAIK.
And I think a mirror would work there — at least the experience with my hubcap mirror suggest it won’t be vandalized for a while. Worth a try.
But it’s more expensive than I thought — over $200 for a good stainless steel mirror.

google street view only goes back to 2007, but it’s on there then

I used to use the chute, and for a while crossed the rr track. Both suck. I eventually figured out that using the street, inbound and outbound, works just fine. There are breaks in the traffic that give you (more-or-less) enough time to ride through.

I thin a reasonable short-term solution would be to sharrow the street between Wormser and Irvine (outbound left-lane). A traffic light at Wormser triggered by bike presence would be nice, though a speed table just west of there would probably work.

The right solution is still a tunnel under the rr. 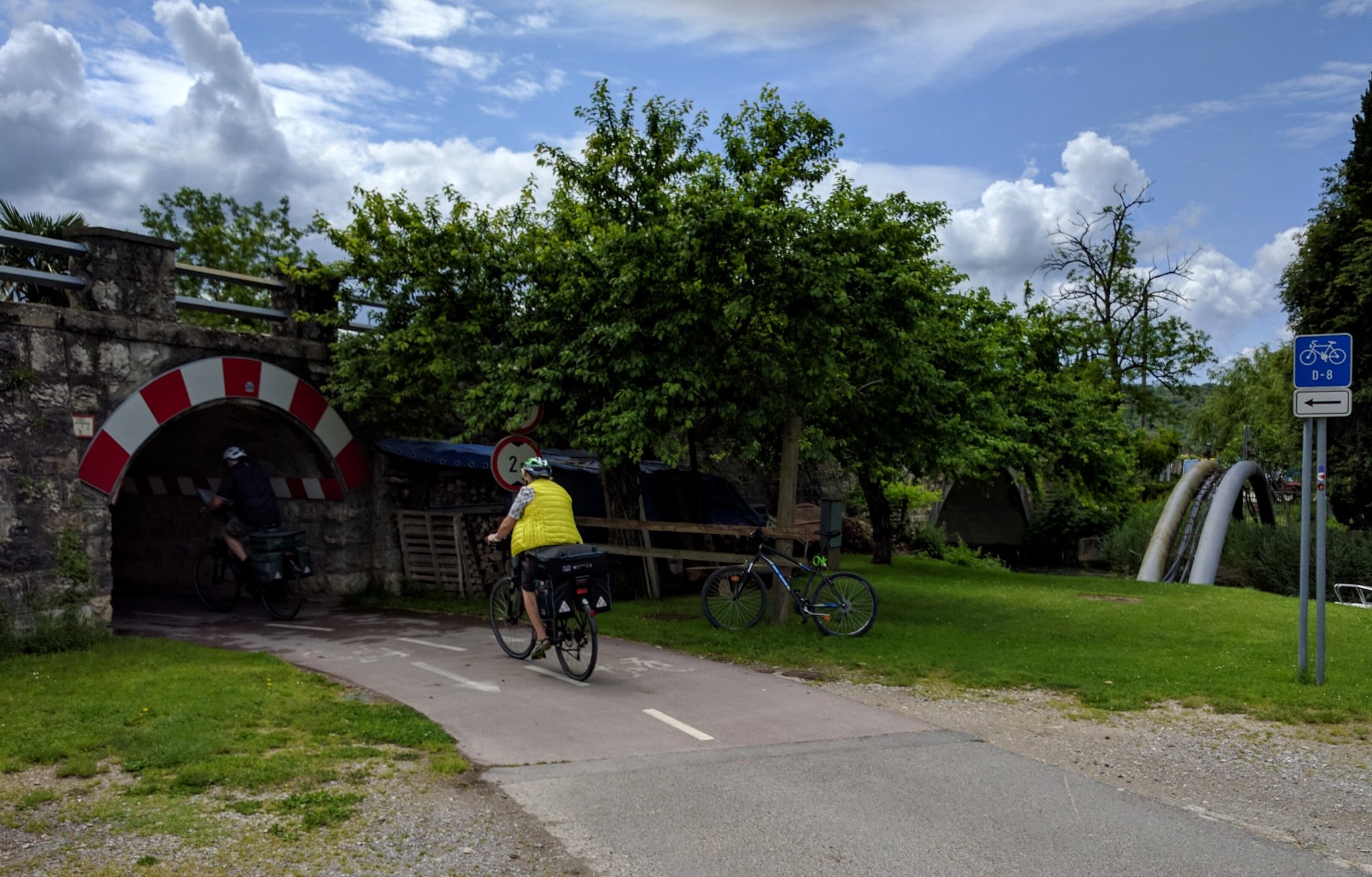 Maybe that will reduce the need for 3 lanes going under the bridges there and free up space to make a wider protected bikeway?

Or I could be totally wrong about all of this, this is a vague recollection of a draft plan presented to the public a year or two ago.

I’m torn between adding to this thread or start a separate hovenring thread. For now, I’ll opt for the former.

An interview with the designer of the hovenring:

I’m bumping this thread. I never walk in the chute as that would be just dumb. I just go slow down the chute outbound only, and if another cyclist is coming towards me I simply stop and let them bike by and go about my way.

Today however, there was a really slow cyclist going down the chute in front of me (whatever, I will be patient) and I had some really obnoxious hot shot riding up behind me full speed. I first stop to let runners go before entering the chute and the dude almost runs into me down the hill. Then proceeding forward behind the slow cyclist he is riding my tail and starts yelling, “on your left”. Seriously, the dude was trying to pass two cyclist in the chute. By the time we were at the bus stop he was about to push us out of the way.

Following protocol and walking in the chute is taking the law way to seriously and illogical, but riding somebody and trying to pass in the chute is beyond the pale douchebaggery.

How about the signs in the parking lot saying cyclists and PEDESTRIANS must yield to cars. What king of poppycock is that?

Parking lot is not a trail anymore, speaking technically. I would prefer people (bicyclists, roller bladders, even runners) entering parking lot  from the trail slow down and yield any traffic on the lot. Too many close calls especially when there are kids on the lot.

“…but riding somebody and trying to pass in the chute is beyond the pale douchebaggery.” 100% agreed. With that behavior, I wouldn’t feel compelled in the least to clear the way for an asshat like that.