We Need Trails on Both Banks of the Mon

submitted to the Pittsburgh Post-Gazette as an op-ed (I hope the publish it):
Seven years ago we had no trail past Kennywood or Sandcastle. Since then, the Great Allegheny Passage (GAP) trail was extended to downtown Pittsburgh, and it has become quite popular. If you imagine yourself floating down the Monongahela River from McKeesport, the GAP trail is on the left bank. But for those on the right bank, it’s difficult to get to the GAP trail and to travel along the Mon by bike or foot. To help Pittsburghers stay active and rediscover their rivers, particularly for the large population in the east end, we need a complete network of trails on the right bank of the Mon, and good connections across the river.
Bike trails in Pittsburgh have been a huge success. They’re a bargain and they improve quality of life. People are cycling more for a variety of reasons: to save money, to combat obesity or diabetes, to reduce pollution, to speed parking, and because cycling is low-impact and it’s calming. For some trips, it’s quicker than driving. The GAP trail on the left bank is popular with bike commuters, recreational cyclists, joggers, dog walkers, and rollerbladers. Tourists come from around the world to bike the 320 mile trail to Washington DC. Cyclists from downtown use our city’s new HealthyRide bike share to pedal across Hot Metal Bridge and venture out on the GAP Trail to watch the bald eagles.
Unfortunately, things aren’t as nice for cyclists and pedestrians on the right bank of the river. If you were to bike today from Hazelwood to Braddock on the river’s right bank, you would endure the following: sharing a road with speeding cars, rough gravel near Glenwood Bridge, an illegal carry across railroad tracks, skirting a railroad fence, and several miles of a gravel and mud service road. It is unpleasant enough that few do it. But if a proper trail were built, we’d have 100 or 1000 times as many people biking and walking this route.
Here is what’s needed between Hot Metal Bridge and Braddock.
A road with adjacent bike path is currently under construction at ALMONO; it should open in a couple of years. South of Hazelwood is Glenwood railyard, a tough obstacle. To build a trail around it, we’ll need cooperation from CSX and AVR railroads. Just beyond, a ramp up to Glenwood Bridge or a new bridge over the railroad tracks must be built.
Continuing upstream, we’re on the existing Duck Hollow Trail. Between here and Carrie Furnace, this riverbank is nearly wilderness (We should all be thankful that the Mon-Fayette Expressway extension through here was quashed, as it would have spoiled this quiet area). At Duck Hollow, where Nine Mile Run flows into the Mon, the Nine Mile Run Trail branches left through Frick Park. If your destination were Squirrel Hill, Point Breeze, Homewood, Wilkinsburg, Edgewood, Regent Square, or Swissvale, you would turn off here. You can also cross the river using Homestead Grays Bridge, but this entails a 160 foot climb.
Further along, in the brownfield redevelopment site at Carrie Furnace, we find a great prize, the Rankin Hot Metal Bridge. The bridge is low and it could connect directly with the GAP trail on the other bank, so this will be the best trail connection across the river. This bridge was sold to Allegheny County on the condition that it someday handle cyclists and pedestrians. Refurbishment is estimated at $30 million, but most of that expense is connected to cars and trucks.
Continuing upstream, we take the wide sidewalk of the recently-built Carrie Furnace Blvd in Rankin, and this connects us to Rankin Bridge or Braddock Ave. The latter runs through the center of Braddock.
From Braddock, a natural route is to follow Turtle Creek upstream. If Allegheny County builds bike lanes and trails up that valley to Trafford, they can connect with Turtle Creek Rail Trail to Murrysville, which is under construction in 2017 by Westmoreland County. This connection was popularized in David Conrad’s Rough Diamond Trail videos. This trail will soon get linked to existing trails that continue 75 miles east, most of the way to Altoona!
If we build this trail network, it will strengthen Pittsburgh’s growing reputation as an model of revitalization. Trails will help our communities and our people get healthier.
We should set a goal to build all of these trails within the next ten years. To make this happen, we need support from residents, business owners, and politicians. You can help by donating your time or money to trail organizations such as the Steel Valley Trail Council and Friends of the Riverfront.
Paul S. Heckbert 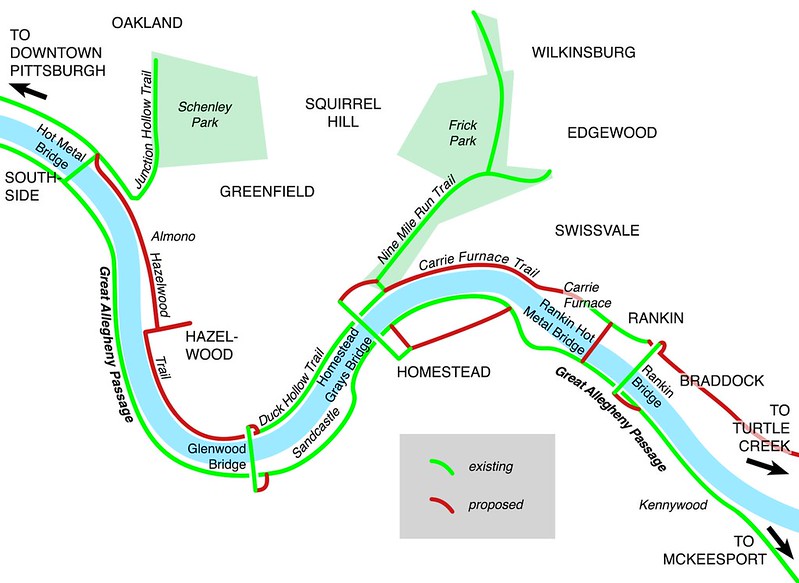 This is awesome work. Thanks, Paul.

For reference, this relates to past threads such as:

One more, from 2009, referenced by one of the above threads.

downtown to Carrie Furnace….is it bikeable?

And another related thread, from 2013. It’s amazing how the same ideas come up again and again … maybe a sign that they’re good ideas?

the same ideas come up again and again … maybe a sign that they’re good ideas?

There’s going to be so much American bike infrastructure built over the next 4-8 years that cycling will be great again.

We have made great strides in the last 20 years on bicycle trails,but unfortunately it’s outside the city limits.If you live inside  the city limits,(like I do in Greenfield)),without a car your stuck and out of luck .We need trails  that extend out past the city of Pittsburgh.This is why it’s so important we do have a trail on the northern Mon extending all the way to Trafford to eventually connect to the Westmoreland Heritage Trail.Hopefully this will happen soon.

@cycleguy do you mean you’re out of luck in Greenfield if you just want to ride on dedicated trails?

This report found that in Braddock, among other PA communities, many people are so poor that they can’t afford car insurance. Here’s an inexpensive step in the right direction: build a bike trail through Braddock, connecting to jobs in Homestead, Oakland, Southside, and downtown!

The Post-Gazette published my op-ed today:

Note that the map at https://flic.kr/p/PuL75h, is far superior to the map the PG created.

Looks like they drew your lines on their generic map base.

From my iPad, at least, I cannot access a comments section. What I would say if I could is:

Once built, I would like to have a three-way race: East Pittsburgh at the bus stop at Electric Avenue and Dynamo Alley to the Mellon Square Garage at Smithfield and Sixth Avenue, starting at 6:45 a.m. — one in a car, one on a bus, one on a bike. My money would be on the cyclist.