Just watched Umbrellas of Cherbourg at the Regent Square Theater. The film has tons of bicycles in it and a hilarious background tracking shot with the protagonists “walking” a bicycle down a city street. See the (in)action here! (starts @ 3:10 in)

I’m not sure that’s a visual effect. Looks more like a moving platform to me.

(And technically it would have been a blue screen in that era. Green didn’t arrive until digital compositing; in 1964 they were still using optical printers for visual effects of this sort.)

But however it was made, I agree that it’s a weird shot. A YouTube commenter says it “captures the feeling of ‘walking on air’ as lovers often feel, and allows us to? completely focus on their emotions rather than the physical action”. But it just made me focus on the weird physical action.

Thanks for posting this. It’s been a few years since I’ve seen The Umbrellas of Cherbourg, and I’d entirely forgotten that the memorable song in the scene was from that film.

I think you are right about it being a moving platform & not a blue screen, though. I watched again and there is a shadow on the wall at the end of that shot.

The color design of the film was pretty amazing.

i haven’t thought of that movie in years. totally great stuff. musical thru and thru.

Wow! I had no idea it was a blue screen before it was green. I have never seen this movie before. I have missed out on a lot of classic and older movies. I should really watch more.

Of note, my high school English teacher had the biggest crush on Catherine Deneuve. There was a picture of her on one of the boards in the front of the class.

That clip was amazing, if a little difficult to watch. I’ve always heard about that film, but I’ve never seen it, I would probably not, of my own free will, see a tragic French opera put on film. It seems like something I “should” see.

It might be interesting to see this new one, “Potiche”, as a bookend or antidote to “Umbrellas”.

That clip was amazing, if a little difficult to watch

Visually, it’s not one of the more interesting scenes, despite the strangeness of it. The art direction of the colors and costumes is pretty mind blowing throughout, especially some of the interior shots. Total geek out for people who are interested in basic color theory from a art + design perspective. 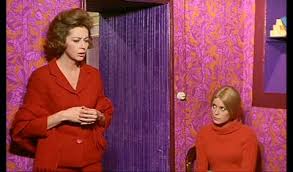 I’d been wondering why all the blue screens in dvd extras were green, I figured green was the new blue, didn’t know it was a totally different process. It aint easy being green…

Pseudacris – that’s kinda creepy, the woman in the lower left looks exactly like my aunt did in the 70s… But she’s not a french actress. Colors are indeed awesome.

Blue and green are both used because they’re farthest from white peoples (pale orangey) skin tone on the color wheel & therefore easiest to separate photographically. Digital cameras pick up the greens best & analog cameras did better with the blues.

You can use any color to chroma key, though.