It is clear to everyone that it has been a rough couple of months here in the city. As i have been riding i have also noticed the increase in cyclists on the road. (Im part of it) i have also been

Run off the road

More times in the last 5 weeks than in the last 5 years. The question i have been asking myself is “How should I deal with it?” So far the answer has been loud swearing and a period of intense fuming.

There has to be a better way. So i look to you my biking brothers and sisters. How do you deal with it.

I try to be over the top kind. My knee jerk reaction is usually intense fuming as well. Most of the buzzed experiences I have had seem to be from drivers who do not know better. When I catchup to them, I just make eye contact and ask them to give me more space when they pass. Eye contact is powerful, it humanizes riding a bike and lets drivers know you are just like them without the car.

This never seems to work with truck drivers. They are to high up to make eye contact and the few that have buzzed me could care less. In these cases, I try to be more aware when they are approaching and protect myself by moving over to the side or stopping and letting them pass.

+1 TonyP. Eye contact is key when possible to diffuse situations.

Personally, I started coming here more often when things started getting really bad over the past couple months. I was finding that I had a lot of road rage built up from confrontations. Riding was becoming more stressful and I was more easily irritated then I used to be.

Posting those frustrations, putting them into words and seeing others do the same, has really helped put them in perspective and made it easier knowing I’m not the only one out there getting harassed. I also talk with my bike friends about both the good and bad situations we get into.

Being A-R and generally inacapable of thinking on-the-spot, I use a flowchart based on my subjective analysis of the realm of damage (physical or emotional) and driver intention.

Which, if nothing else, says something about me and is likely to generate sympathy for my spouse. 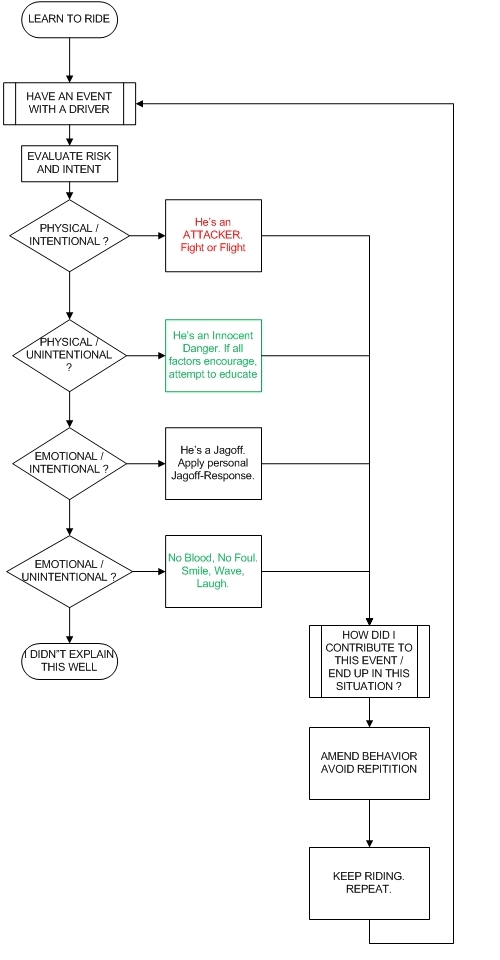 I agree with TonyP. I try to be kind and also I would add I ride my bike very defensively. Visible, but try to avoid situations with my timing. I agree with truck drivers and many pickup truck drivers. I don’t think they have the…. well mental capacity to realize some people actually ride a bike to work or don’t own cars. They just assume we are out there for a ride and are in the way. Best to avoid if possible, because cyclists always lose, due to us having no protective shell.

I’ve been experimenting with different routes–seems like drivers behave more aggressively on some streets than others, and it seems to have more to do with the psychology of the specific street than with speed limits, width, etc. (which is weird).

I’ve had to stop reading the comments on bike-related news articles after work–keeps me up all night.

Other than that, I agree–I try to ride more, drink some Big Hop, and get more involved with fellow cyclists who understand the insanity.

I try not to respond at all. I did make eye contact with a very aggressive motorist who screamed at me while buzzing me on Thom’s Run (admittedly because I was looking for a license plate number).

Sometimes I start laughing at some of the comments or particularly vituperative testosterone-fueled invectives, which probably doesn’t help to defuse the situations.

Depends. I generally let out a loud sharp yell at the moment since I don’t have a horn and would prefer to stay un-crashed-into. If I catch up to the driver my first reaction is to politely educate. Depending on the reaction I recieve, it either goes pleasantly or I go ballistic on them. I can be nice and loud and scary when I need or want to. I’ve also been known to chase people for blocks and scream at them on rare occasion. It’s nice to remind people that picking on a cyclist from your car doesn’t necessarily equal a quick and easy getaway from a defenseless target.

Then I go for several mtb rides to calm the fuck down.

Vannevar, your chart made me smile

Stress relief is key. Typically, hauling my butt up some hills for an hour or two does it. When it becomes more a source of stress than not, I go for a long, long run. I don’t turn around until I feel better (and then have the return trip to get further exhausted). But that only works after I’m off the road.

Sometimes the best option (for me) is to sing at the top of my lungs whatever the first song is that comes to mind. Very often it’s that Gloria Gaynor song I Will survive, or some classic Linda Ronstadt (Love is a Rose is a nice one, or You’re No Good). Show tunes are also good, though Sondheim usually takes more focus than I can lend it while riding. Rogers and Hammerstien is easier.

I haven’t found a way to talk to most who yell. Often I’ll get surprised by an apology. More often, they’re gone before I can respond, so my response is just for me. That’s why it’s singing.