Tag #1: Pools. This is a double pool photo. First, it’s the fountain in the courtyard to the County Courthouse. Second, this is where jury pools enter the building. Second pool photo (still counts as one for the game, I realize, but I thought I’d throw it in for something different). Pool hall on Frankstown Ave, near the East End Brewery. First is the Pittsburgh Pool of the Ohio River, which is defined as the water around the Point, extending to the first Lock and Dam in each direction. 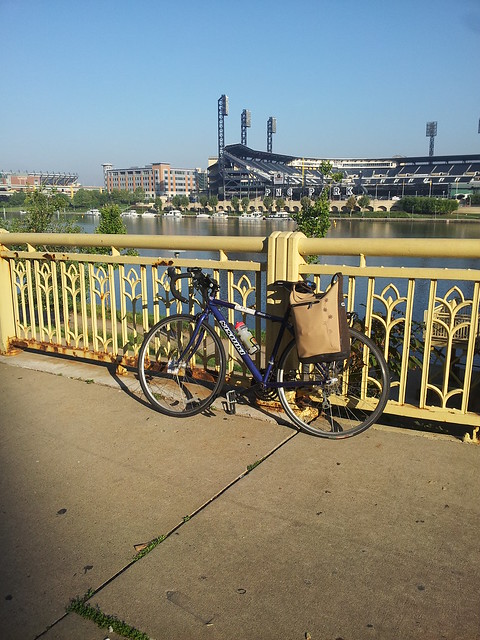 Second is a CommuteInfo vehicle. CommuteInfo is the carPOOL and vanPOOL service that SPC coordinates. 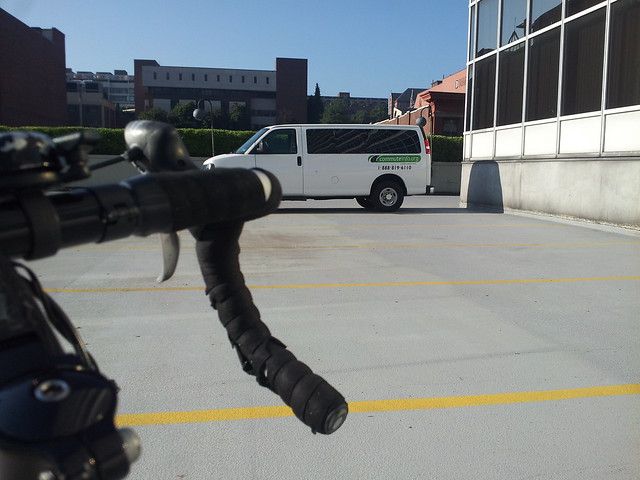 This guy caught my attention on the way into work this morning. He was buffing his immaculately clean car at 8:00 in the morning. But, what really got my attention was the R&B music he was dancing along to as he worked. All at a tasteful volume. He was so cute I knew I had to use this as my Labor tag. 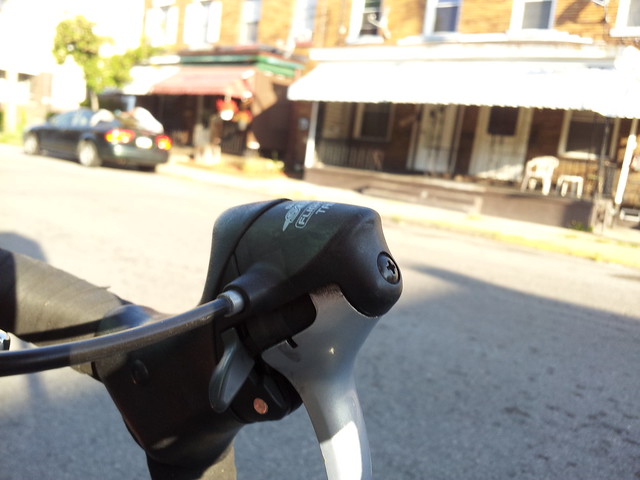 I was going to take someone’s picture on Polish hill, but decided on this instead LOL. I believe you found a good “pole”, Marco, but I think we should count it anyway! A for effort. :)

Tag #2. I believe some of the women in here will agree that this tag should count. Tag#2, labor. Remember that photo in the last round about Perry Hwy being all torn up north of the Ross-McCandless line? They’re working on it at night. Here are two of about 20 trucks and a McC Twp cop assisting with traffic control at the Perrymont corner. Alternate take; I wasn’t sure how well the bike showed up in it, so I took the above shot, too. (The bike is in the shot, if only barely, at lower left.) Random numbers were 5&2, so it’s Swalfoort and Rusty Red on deck.

Well, Pool/Pole and the multiple meanings of Labor made me think of Homonyms:

So, the next tag is

On the news the other night, I heard the weatherman mention that we should all enjoy the last bit of summer, because by the end of September we will have 66 fewer minutes of daylight than we had at the start of the month. (2 minute decrease per day, this time of year.)

So, this Tag 2 is a celebration of late summer, lost summer or missed summer. I realize that fair weather for cycling I cause fo r celebration on its own, but let’s all find something that we won’t be able to find (at least as easily) a month from now.

This might be the first time I regret not still being in the Navy. :P

Both are awesome tags btw. Here is where concert go-ers go to WORSHIP.

Tag #1: Warships. As it happens, the book I’m reading right now is a historical novel about warships, in particular the British Royal Navy in 1804. This is the third in a series of novels for young adults by L.A. Meyer, featuring Jacky Faber, a girl, orphaned and living on the streets of London around 1800. In the first book, “Bloody Jack”, she disguises herself as a boy and runs off from living under a bridge with her street gang to join a British warship. And does very well at it. In Book 2, “The Curse of the Blue Tattoo”, she’s forced to go to an upscale girls’ school in Boston, and take some lessons in living in high society, as her schoolmates are likely future wives of presidents, senators, and masters of estates. But here she is, in Book 3, where she ends up in command of a British warship, taking prizes (i.e., other ships) in the war with Napoleon off the coast of France. You could learn a lot about sailing ships and preparation for warfare — in particular, how to load and fire a cannon — by reading this book!

Here’s one on the left, and one on the right (at least in Pgh on Sunday) End of Summer/things that won’t be there in a month: Tag #2: End of summer
I will not be sorry to see the knotweed die off. By this point in the year, I lose half my trail. Outside seating at restaurants. On one hand, I’ll miss being able to sit outside at places. On the other hand, it will be nice to have the whole sidewalk for pedestrians again! (This photo is at a cafe where the sidewalk is generally wide enough for both (plus a crappy bike lane), and where I organize a monthly board game event, and in the fall and winter they close at 20 instead of 21:30 mostly because of decreased foot traffic, so also a negative for them, I assume.)

So, @srpit and @marko82 get to pick the next tags.

Marco can set the end time.

I can’t believe that I missed the whole last round…..

Pro Walk Pro Bike consumed much more of my time than I realized!

Looking forward to this round.

With all the bike infrastructure being installed recently we tend to forget that we need more pedestrian infra too. So how about finding a place that needs some pedestrian TLC: a curb that needs cut, an intersection that needs a crosswalk… or a pic of an existing pedestrian “improvement” that leaves you scratching your head, like a curb-cut to nowhere. And I think multiple submissions should be very much encouraged, and hopefully worth passing on to 311 or the new bike/ped coordinator.

I think this is a tag where the more the better……!

Tag #2: Bad pedestrian infrastructure: McKnight at Babcock, southern corner southbound. Ross Twp, but I don’t know whether this would be state, county or township responsibility. McKnight is a miserable road to bike, but this spot makes it most unpalatable. Coming south on McKnight, it’s downhill after Red Lobster, but bottoms out right here, just as cars merge from coming up the ramp from Babcock to go south on McKnight. What makes it so miserable is that there is a tall curb here, so cyclists have to come to a complete stop to get up on the sidewalk to go uphill. Ambient traffic speeds in the right lane are 50+; they’re sometimes 70+ in the left lane. (I monitor this on my weekly trip via motorcycle.) Cyclists can easily achieve 30+ coming down this hill. Speed limit is 40.

It would be sooooo nice to be able to aim just a couple feet to the right to go up on the bridge’s sidewalk, but the stupid high curb requires a panic stop, a complete drop to zero, with the freaking traffic barreling down on top of you. Of course, *not* to do that means you lose all momentum and are then straining to maintain 15 mph by the other end of the bridge over Babcock. Cars can’t pass, since left lane traffic is SO damned fast and the cyclist’s panic stop/swerve/curbclobber is going to be entirely unexpected.

This bridge JUST got worked on, a complete rebuild, two years ago. Why didn’t they add an itty bitty curb cut to make it ADA accessible? Not that anyone in a wheelchair is going to use this, much, but this setup sure does make it difficult for cyclists.

South end of Birmigham Bridge & Carson Street. There is a croswalk signal to help get across the “center” of the crossing, but not to cross the two ramps where cars only have yield signs and usually dont stop for pedestrians. Why does the pole need to be in the middle of the sidewalk? There are quite a few of these in the Soutside Works. re: the S. end of the Birmingham bridge – the right turn lane NEVER should have been the sweeping, exit-ramp-style turn. Neither westbound Carson Street onto the bridge. Should be a complete “T” type intersection. Reflects the persistence of highway-type thinking for city applications among m*****f****** traffic engineers.
If anyone knows any young people of an engineering bent, and interested in biking, suggest that they go into civil/traffic engineering. The whole profession needs to be ground down and re-booted.

Tag #1: Aromatic. BBQ Ribs place on Babcock Blvd, just outside Millvale. Some nights, I feel like stopping for dinner instead of going home, and I don’t even care for ribs! Also check out the sign behind my bike:
“Slow down, enjoy the smell!” Sorry folks, I am out of the game.

I have spent 15-17 minutes logging into and out of websites just to upload and transfer a photo….to no avail.

Between popup blockers, need for email verifications, etc., the inconvenience factor is just to great.

Until I am motivated enough to find a more direct photo load option, I won’t be posting more photos.

I’ve enjoyed the game immensely. I’ll miss it, and will probably be popping in to check out the tags on a regular basis. But, I won’t be posting. Sorry!

^ I don’t understand. It couldn’t be easier, just upload directly to this site.

I am in IE. I don’t get that link option.

Bummer. Have you tried Chrome? Firefox? They rock.

Works for me in IE10.
Just above the box where I type in text, there is a tiny icon. I click that, then on the “Upload an image” button, and navigate to the file with the photo on it (standard File/Open dialog box). Much easier than messing around with Flickr or whatever.

You do have to be logged in to the site, or the button won’t show up.

Brilliant (but honestly not ALL THAT aromatic) foliage at convention center bike share station in downtown Columbus, OH.