Well as some of you know, I have been riding a lot more lately and I would like to continue this as far into winter as I can. But I really dont want to expose my beloved Diamond back to those kinds of elements so Im thinking….

I have this spare set of wheels (good wheels DT spokes double walled rims) and if I can pick up a decent 26″ mtb and put the good wheels on it, maybe single speed it so i dont have to worry about the derailuer getting messed up I’m thinking it would be a good winter bike.

I would go with just a beater bike for the winter but I really do need the better wheels since I am still a Fat guy on an Orange bike (yes I have two rattle cans of chevy orange waiting for when I get the beater bike.)

So if any of you have or know of a bike that wold sound like a good fit please let me know. im hoping to put less than fifty bicks into this project since I have a vacation to VA beach coming up. 8-]

Truthfully I think your Diamondback is perfect for the snow, I know how difficult to take your favorite bike out into the snow. I ride my beloved Trek Portland all year round I tried riding my beater bike and It just didnt work. Keep the bike clean after you ride and keep the chain oiled and you should have no problems.

Mr marv. I expected Marko to tell me that (truth is I’m looking for a project to build while the weather gets cold.

you did get it right about my feeling of taking my beloved dback out into the harshness. My bike has seen me thru so much and stood patiently by while i stupidly ignored it.

Still the idea of building a single speed bike and riding around for while does sound like fun. got my eye on the converstion kit down at thick — they even sell an orange chain!!!

^ Well its true I was more or less quoting Marko. He’s taught me a lot this summer.

He taught me a lot to. Several people on the boards here have been a huge inspiration to me over the past couple of years.

ugh. it feels too early for this annual thread

hey was that you sitting downtown on penn ave who i said hey to yesterday(?) morning?

Orange chain, do it!

you would still need to periodically maintain your trusty diamondback over the winter even if you don’t ride it. i take the advice of the contractors i work with: “if it ain’t movin’, it’s rustin'”

even if you break it all down, clean and lube/seal every part, then leave it set over the winter, you will most likely see some degradation in the spring. the minerals that exist in our air, soil and water are corrosive. so if you take your bike outside often – like a normal person -, then you expose it to things that will degrade your bike in places you may not access without a distilled water bath.

@noah Yep that was me. headed off to work, got up to late to ride in and not be VERY late so I opted for only being kind of late.

I should of opted for Very Late with the way that day went. it is always good to see someone I know. Especially if they are on a bike

i am currently building up a mtb for this very purpose, i just picked up a flipflop hub laced to a wider rim and I’m going to stuff a 700x35c onto a 26″ frame… thinking about disc brakes or a fixie just for fun, fixed gears have a lot of control in the snow since you’re hooked right into the drivetrain you can control and recognize slippage better. I rode slicks in the back, knobbies in the front last year and it worked ok, i think i’m opting for knobbies all around this year though if I can put them in the frame.

Fixed is still a little out of my skill level. Im thinking just ss this year and maybe go fixed on it over the summer when I feel a little more confident and dont have to worry about water, slush, or ice

This seems like a good time for a commercial.

Also seems like a good time to review The Rules, #9 in particular.

Fixed gear hurt my knees. I have heard others say it also.

+1 on the orange chain! I always look at those different colored chains at thick, but I don’t think they will look good on any of my bikes.

I will probably use my single speed as long as snow isn’t in the forecast, and then use my cross bike with fenders once it does snow. I rode last winter with RIBMOs that are 700×25 and did fine on the unplowed jail trail.

I figure that my bikes are going to get some wear and tear from riding them. That is what they are there for! Last winter was the first year I didn’t hang the bike up once it dropped below 45 degrees, and I got less depressed about short days and cold weather.

no derailleurs in the winter rules. riding a fixed gear in the winter is the only time it really makes sense to me personally…but baby steps!

I probably only ride a fixed gear 20 hours a year, and the bike that I use is geared about 2:1 so I never experience that, I wonder why it would be any different than single speed unless you’re riding like a mad woman (or riding brakeless)

I think that not being able to coast when putting in 100-200 miles a week does it to my knees. But I totally agree that single or fixed is great to have just because of low maintenance. I run 46 in the front and 17 in the back. I don’t know how to figure that out. Do you divide 46 by 17 to get the x:1? I tried the Sheldon brown thing but I don’t know much about bikes.

I’ve been riding fixed since 2003 or so. Half or more of it “brakeless”. My knees are just fine, no pain at all.

do you ever worry that your chain might snap when you’re running brakeless? true story: it happened to my husband but he was able to stop because he runs a front brake. good thing, cause he was in traffic near 2nd ave and 10th st bridge.

And you haven’t lived ’til you’ve dropped your chain going down Baker Street on a brakeless fixie. Oddly enough, that wasn’t a “come to brakes” moment for me–it took a few weeks of commuting seven miles out Mt Royal Blvd to change my mind.

i was heading down at a good clip from the jail to the 10SB in rush hour traffic when my chain snapped. not sure i could have managed to turn onto the sidewalk at the bridge and avoid heading straight into rush hour traffic from the bridge through the armstrong (i was slowing for the red light when i snapped my chain). no place to run it out safely there, glad i had a brake.

What IS the practical purpose of not having that brake? Savings in weight? Aerodynamics and sleek lines? I don’t see how one brake would affect the zenlike “be one with the road” philosophy of riding fixed. I wonder if it isn’t more that it is bike jockiness/machismo, like riding a motorcycle without a helmet or driving without seatbelts.

What IS the practical purpose of not having that brake?

Must everything be practical? Can’t I do something stupid just to look cool?

In my younger days, I rode brakeless for about 18 months. I seriously doubt I would ever do it again, but too each their own.

I always thought that brakeless was a carry over from the track bike that aren’t allowed to have brakes. I thought aobut it and don’t think Ill ever go brakeless but I got to give credit to those who do.

Right, so its purpose on the streets is…. 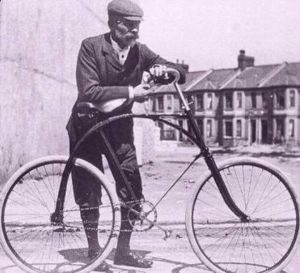 Why do people still buy cars with manual transmissions when we have automatics? Some people would say it connects them more closely with the machine and improves control. Or maybe it’s just fun for them.

Why do people rock climb “free”, un-roped? To me, it’s stupidity, but some people just like to do it.

Buying a car with a manual transmission is nothing like riding brakeless. A better comparison would be driving a manual with no brakes and downshifting to stop. A clutch is no fun to replace, nor are knees.

At first, I kinda bristled over the solo climbing comparison, but after some thought, it is a bit appropriate. In both cases, it’s about walking the line between control and chaos via skill.

It’s all fine and good until you actually need the rope.

@Noah, I agree 100% there is no comparison. Not to mention, what benefit does one get from not having brakes? A stick actually does improve safety because you can feel wheel slippage. I think that driving a manual is more on par with riding a single speed but has nothing to do with riding without brakes. Some preferences make a lot of sense, others not so much.

Yep. The practical purpose has yet to be proven to me so my assumption continues to be that brakeless off the track is an affectation.

I’d be interested to hear someone reconcile the “oneness with the road/increased control” mentality behind fixed with a stopping method that greatly increases one’s likelihood of losing control.

@noah: I’d imagine that it’s not an either-or question.

Personally, I intend to put brakes on my fixie whenever I get around to building it up. However, I can see the appeal in going as minimalist as possible.

If one’s riding style/skillz are such that the brake is only necessary in case of catastrophic failure, it’s not an unreasonable decision to omit said brake, especially if you can get your foot to rub on the rear tire in an emergency.

This discussion is quickly turning philosophical, so I’ll add this:

We all take risks in what we do. And each us decides on both an acceptable level of risk and mitigation strategies to avoid further risk.

@reddan Been there done that 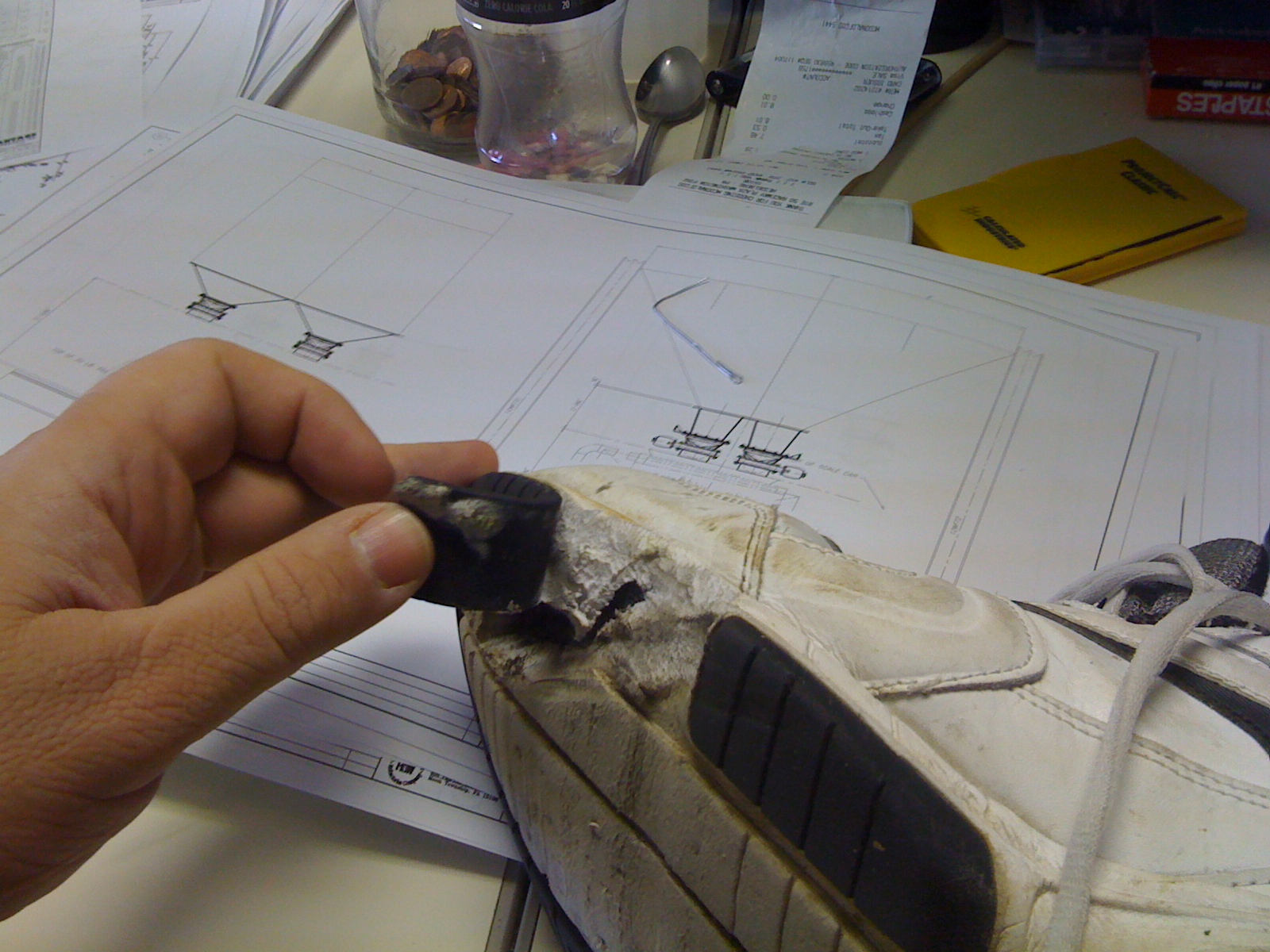 Neither boats nor snowmobiles have brakes, per se, they “brake” through their power transmission systems in the same way as brakeless fixies.

Just thought I’d throw those carrots in the philosophical stew.

Pro tip: if you have a problem braking your snowmobile, _do not_ attempt to use your foot against the track. If you disregard this advice, a whole host of other problems will be along shortly.

I wish I could find the link to the dude in the pick-up truck who drove-off knowing he had no brakes, and was stopped by the police after they watched him go all Fred Flintstone at a stop light (im pretty sure there is a video afloat somewhere).

I’m thinking about un-doing the brakes on my truck, I’m so inspired by his example.

This is reminding me that I finally want to build up a winter beater. This is the year!

I used to stress about having a winter bike (and did for several years) ’til I saw what a guy in Minnesota routinely did to his Rivendell: 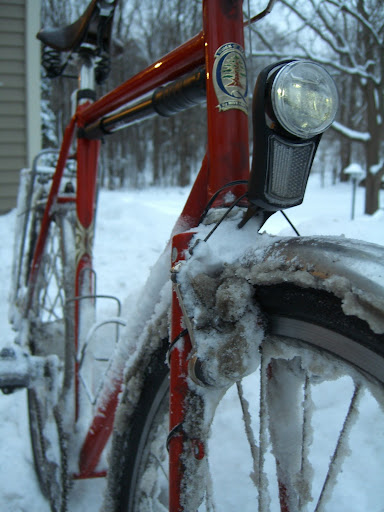 I think my commuter can deal with a little winter muck.

That snow isn’t nearly as bad for a bike as the salt slush our “no-plow” winter maintenance creates around here. Back in Rochester I rode my super nice road bike all winter without a second thought. Here not so much.