Had to steer clear of a few downed branches and puddles that froze overnight from last night’s storms on the North Side RiverWalk and Strip trail. Other than that, just windy.

3/2/16 8H15 Oakland to Downtown. Roads were dry this morning, headwind on EFT/Jail Trail, small patchy ice between Jail and First Avenue Garage. Other than that, I encountered nothing of note.

Put in 311 ticket to address sweet gum tree pods in bigelow blvd bike lanes in oakland between ohara and bayard. It’s getting hard to navigate. I think the property owners swept them off the sidwalk in to the street. Need street sweeper.

Careful on EFT. Construction dragged large rocks and pieces of concrete onto the trail. Hopefully they cleaned it. It was between the bridge that goes over bates and the hot metal bridge.

A couple of things from today:

1) the recent high winds have littered the street with dead branches. It’s sometimes hard to spot the bigger ones in the dark (even with a light).

2) It’s cold enough that puddles at street corners are freezing over.
Not great for maneuvering with cars in the mix.

Bayard inbound lane and bike lane are closed west of Melwood; PWSA is working in and just past the intersection of Craig. If they’ll let you through or you can get past the work site, the bike lane appears open the rest of the way up toward Oakland, though the road appears to be officially closed at least to the alley between Craig and Dithridge.

Outbound side is open entirely, though watch for trucks and other vehicles turning especially wide from Craig (mostly due to vehicles not stopping far enough back in the center lane).

Unrelated: PWSA announced last night that Forbes Avenue between Morewood and Craig will remain closed the rest of this week and through the weekend: https://twitter.com/pgh2o/status/705145954224046080

Watch for backups, higher-than-usual traffic, and especially frustrated and aggressive drivers on side streets this weekend, especially Dithridge and Bayard, as well as the official Craig-Fifth-Morewood detour route.

So there is a newish parking lot on Neville (or is it boundary there?) just downhill from the rail road tracks. Construction vehicle drivers don’t seem to look before tearing out of it, so be cautious.

as of 5-6am: morningside to north side: My street had some ice, but all roads appeared to be just wet. Light slush in the right hand lane on Baum. Bike lanes in Bloomfield were fine. I rarely take the bike lane down Liberty, but it looked fine. Penn ave bike lanes were wet with small patches of light snow. 9th street bridge was wet and salted.

Not too bad at 8AM. I stuck to treated roads.
There’s a new metal plate in the bike lane on Penn between 10th and 9th. *Super slippy n’at.*
Also, a tractor trailer is blocking the bike lane at the Benedum.

Bridges and overpasses were icky though.

3/4/16 8H15 Oakland to Downtown. Roads were wet, but I think the warm temps & residual salt has kept accumulation down. Bates St. is clear on the street, Bates sidewalk has a section of light snow. Second Street sidewalk is fine. Wood ramp has 1 inch of wet snow on it. EFT/Jail Trail is wet but fine. MUP between Grant St & Smithfield is strangely clear to the first expansion joint, then untreated to Smithfield. Downtown is fine.

Inbound Bayard has reopened, but there is still a metal plate, with square edges, at the near side of the Craig St intersection, and they only refilled the hole at the far side with dirt–it’s not patched yet, so the bike lane just inbound of Craig is still blocked for about five feet.

40th St bike lane is still covered in gravel. The banana peel yesterday was funny, though.

EFT at 09:15 is in good condition with very light slash over Bates. Parking lot was full and there was a police officer at the entrance to the parking lot.

I love when banana peels are in the road. I giggle.

Watch out for ice. Slipped on a patch turning into the Miracle Mile parking lot this morning.

3/21/16 8H15 Oakland to Downtown. There was a little bit of ice on EFT/Jail Trail, Wood Ramp off Second is icy. Other than that, just be aware and you should be fine.

Anyone got a few spare roofing shingles to go on that wooden ramp? Five minutes with a staple gun would improve matters greatly, I’d think.

Lots of debris in and around the bike lanes throughout the city. Pretty large dip on the Bayard Bike lanes where they were doing construction last week. Debris on the uphill side of the bike lane forces you out to the edge of the lane. A couple blocks closer to Pitt, there are a lot of Sweet Gum seeds (pointy-ball like things) in the lane, again forcing you to swerve a bit.

Schenley Protected bike lanes are also a bit of a mess once you pass Phipps. There was a cop in an unmarked car sitting in the lane for a few hours today. Also, on the Panther Hollow Road bridge, look out for lots of rock salt in the lane.

please add 311 tickets for the bayard bike lanes, i did this a couple weeks ago and they did some street sweeping to clean it up.

Has anyone else seen a streetsweeper parked in the bike lane near the Sunoco? I have ridden past a few times in the morning and it has popped the curb and appears to be sitting there.

My guess is the operator just needs to find a better place to park while they take their mid-shift break. Maybe send a photo to 311 if you see it there again?

For the record, this winter was quite temperate. 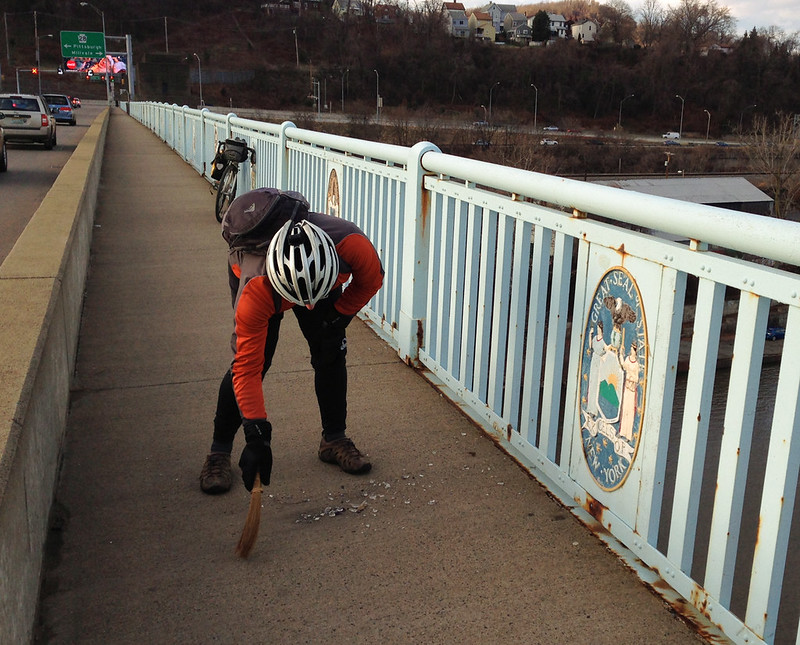 There was talk of switching to a 2017 Riding Conditions Report thread. Is that going to happen?

12/30/16 Secondary roads in Oakland are bad, Fifth/Forbes looks like it’s been salted, Bigelow seemed okay. Going late into the office today, will report back on status of EFT/Jail Trail if I end up going in.

Jogged from Millvale to water steps. All clear on n shore trail. Tons of salt down between the stadiums makes a pretty color when mixed in with the goose poo

EFT clear except for tiny bit of ice by jail.  As will get up into 50s soon all will be clear.

In the previous post, the link to the images is bad.  Try these:

Puddles on north shore trail between 16th and 31st bridges frozen over.  But they are easy to see and avoid. Worst by the back in only parking area.

Think of them as helpful markers pointing out the poor drainage areas on the trail.

@edronline same on EFT/Jail Trail.  frozen ice puddles in the usual places, no big deal.  I agree with the assessment that some work was done on that gravel patch under Liberty Bridge and it’s an area riders should be cautious, when it’s warm, it can get soft.

(We briefly discussed at the end of the Fall thread moving to annual, rather than seasonal, threads.  Still any interest?)

A couple <ins>months</ins> ago I reported a potential water main break at Centre & Aliquippa: https://twitter.com/infinitebuffalo/status/777166023204212736 .  Nothing’s been done about it, so of course that intersection is now iced over.  I did see a salt truck hit it this morning, though.

End of seasonal thread and move to yearly thread? Yes, let’s do it.

Yes. Someone just bite the bullet and create it and put a terminal post on this one.

Ask and ye shall receive: http://www.bikepgh.org/message-board/topic/2017-riding-conditions-report/